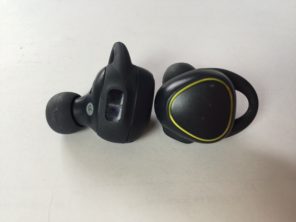 Until now truly wireless earbuds have been a bit of a myth. ‘Wireless’ has meant that the phones will connect with Bluetooth, so they don’t need a connector between the phone and your device, but they often come with a wire connecting the left to right earbud. While that’s been an ok option, some people find it distracting and annoying to have a cable flapping around your neck while doing certain activities.

Enter Samsung’s new Gear IconX earbuds. With not a wire in sight, these earbuds are among the first to be totally and truly wireless. The small thumb-sized earbuds wedge right into your ears for a good slip-free fit, and connect seamlessly and wirelessly to your Samsung device whenever you pop them in.

Compatability
Right out of the gate, it’s important to note these headphones are compatible with Android devices only, so if you have an Apple device, you can stop reading now. 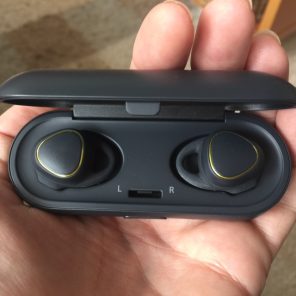 Setting up these earbuds was ultra easy. I’m an Apple user at home, so I’ve had only a couple of experiences with Android-only gear, and I was happy with how quickly and seamlessly they connected to the Samsung Gear app on the Galaxy S7 Edge that was also lent to me for testing.

Once fully charged, you pop the headphones into your ears, and pair them for the first (and only) time to your Android device using the Samsung Gear app. They connected in about 5 seconds and I was listening to music in seconds.

There are some limited settings in the Gear app, and you need to be wearing the earbuds to make some of those adjustments. What can you change? You can adjust which earbud has your primary controls like volume or play/pause functions (for left or right-handers), you can adjust the base volume, plus connect to the Samsung S Health app too (more about that later).

The app also allows you to control which songs can be stored directly on the headphones (more on that later too), get exercise audio guides, make adjustments to the ambient sound settings, and set voice guided menus. 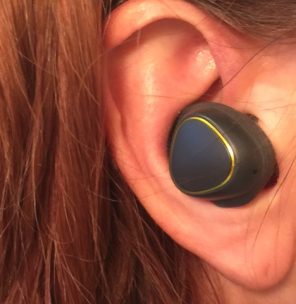 The small bullet-shaped case keeps the earbuds safe from damage or loss, and they lock inside well. The case snaps tightly closed for security, and it also doubles as a charging station when a USB cable is connected.

Fitting the earbuds – won’t they fall out?

One of the main concerns from everyone I showed these to during testing was, “won’t they fall out and get lost”? My experience was no.

They’re designed to stay put, and you can mix and match the different-sized eartips and wingtips for the perfect fit. I walked, jogged and generally bounced around while wearing them and never felt like they were about to fall out. The wingtips are actually small rubber loops that wedge into the back of your ear (in the “concha” or the wider part of your ear canal opening), holding them securely in place.

I also really liked how well they sealed off outside noise; they’re not billed as sound isolating as far as I could tell, but they may as well be. 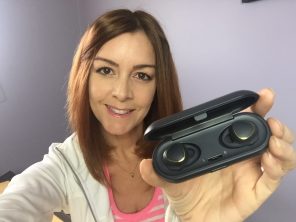 Fitness programs & tracking
If you’re the kind of person who needs motivation to get moving, these earbuds may just be your thing. The Gear IconX in-ear voice guide coaches you to reach your “vigorous-intensity zone”. The voice (which is available in 15 other languages too) works via the S Health app and gets you started, taking you through warmups (“Walk briskly during warm up!”) and giving you time cues (“Three minutes left in this exercise!”). By syncing with your Samsung smartphone after workouts, you can check your stats and monitor progress on the S Health app.

The Gear IconX can also track your activity and give updates on essential data from speed, distance and duration, to heart rate and calories. Unfortunately, I tried and failed to get the earbuds to display my heart rate using the S Health app.

Built in touch controls
No fiddling with your phone! Volume is controlled by dragging your finger up or down along the ‘main’ earbud.  Tap the earbud’s side to play/pause, or tap twice to skip or to take or end a call.

Automatic connect/disconnect
The earbuds turn on and off automatically; when they’re in the case with the case closed they turn off. When you take them out and pop them into your ears, they activate all by themselves. Pretty neat! And a far cry some some other headphones which need to be physically turned off and on again or re-connected frequently. However there are battery life issues, which I’ll get to below. 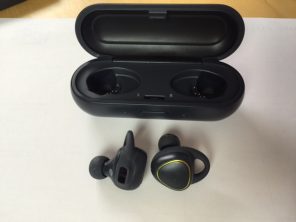 Store music on the buds so you don’t need a phone!
One really useful feature is the ability to store music right on the earbuds; yes they’re actually also tiny storage devices! The IconX is in effect an uber-tiny music player with up to 4GB of internal memory. That means you can load up to 1,000 songs and go for a run, ride, or a workout, without your phone slapping against your body in a pocket.

Outside awareness/Ambient Sound control
Running or even just commuting with all your senses dulled can be a bad idea. The Gear IconX earbuds have an ambient sound mode which allows you to hear what’s going on around you.

The volume is quite loud; I could hear things like finger-snapping, humming, or whispering around me, all while still paying attention to my podcasts or music. The only thing I didn’t like about the way this feature worked is that it’s either on or off; you can’t control the ambient sound’s volume level like you can with some other headphones. So if you’re sitting next to a loud talker on the bus, you may just need to toggle this feature on or off as you need it.

My thoughts on the Samsung Gear IconX earbuds

I loved the freeing feeling of being completely wire-free; there were no cables smacking my neck as I jogged, no wires getting caught around my ears, or in my hair. I also love the surreptitiousness of these earbuds; if you’re they type, you could keep these in your ears on an airplane even if you’ve been told to power off, and no one would really know, especially if your hair is longer.

I found the fit comfortable, and they were easy to wear even for longer periods.

Sound Quality
The sound quality of these earbuds is pretty good. I feel like I wasn’t getting some of that fine audio detail that I have from more prosumer audiophile headphones but they sound good. I found them to have a bit more high end than I normally like, so I put on some tracks with a lot of bass. I definitely didn’t get that jaw-jarring head-vibrating bass effect that I have with other headphones, but I also don’t think these headphones are really meant for detailed and focused music listening. I feel like these are made for commuters, office workers, and average Janes and Joes who would rather have the snag-free wireless experience for phone and conference calls, and basic listening.

Sync issues
One significant problem I did run into across several days of testing, was that there was a noticeable and significant lag in the audio when watching YouTube videos.

With music, it was less noticeable depending on how much the artist was lip-synching along to the words. So I loaded up a few instructional videos, and TV video clips and set up some comparisons: I watched videos on both my iPhone, on the Samsung Galaxy S7 using the speaker, and then with the Galaxy S7 and the IconX earbuds connected. The delay was remarkable; there was almost a second and a half delay when using the earbuds. If I was watching a full movie or a TV show using these earbuds, it would be impossible to stand.

I thought it could have something to do with my Wi-Fi connection, so I took the Galaxy S7 onto the cellular network and tried the tests again. The delay was still the same, so my conclusion is that while these earbuds were fine for music and podcast listening, videos are a major problem.

Battery – only 2-3 hours use on a charge
I wasn’t super thrilled with the battery life of these headphones. After a full charge, and just an hour of use, I’d put them away. By the next day, they only had about half a charge.

On another occasion, I used them for about two hours on on a Saturday, then put them away in their case. I went to pick them back up on Thursday and they were totally dead.  I was quite surprised since these headphones automatically connect and disconnect when they’re in your ears, or stored in the case.

Compared to another pair of wireless Bluetooth headphones I use often, the Gear IconX underperform on this front, since my other headphones (the Jawbone SportCoach) can go for two weeks without ever needing to be recharged, after getting more use.

Interestingly, on its website Samsung doesn’t list the battery life in hours, instead listing just the milliamps: Earbuds: 47mAh and Case: 315mAh. If you’re an engineer, you can have fun calculating what that actually means in terms of listening time, but suffice to say I only got about 2-3 hours of use out of them on a charge. Further research after my review period shows that’s what Samsung seems to expect you should get, and what others got. That’s not good enough for me, since they probably wouldn’t even make a full plane flight.

Range
The range on these headphones was ok. I found distance from the earbuds to the phone wasn’t a problem, but putting walls between them was. I was able to walk around my home’s main floor, but if I put a major wall between myself and my phone, the audio would cut out. From my testing with other headphones, however, the Gear IconX performs on par with other wireless headphones.

In short, though I love the idea of these earbuds, and they have a number of pros and fun features, these have enough limitations that I’d wait for Gen 2.