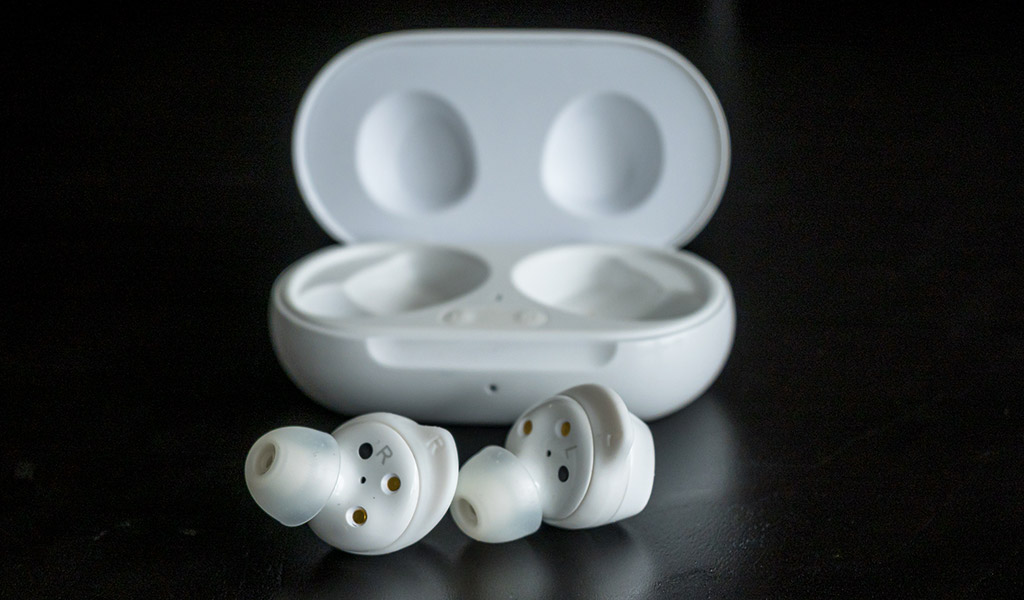 Samsung is back and given its new Galaxy Buds+ true wireless earbuds a few new features and performance upgrades for anyone looking to wear them.

With last year’s Galaxy Buds, Samsung managed to correct some mistakes from its previous Gear IconX true wireless earbuds. Not only did battery life improve, but so did audio quality and and the level of comfort. With such a strong foundation, it’s hardly surprising the new Galaxy Buds+ look like clones. Look beyond the outer design, and the tweaks are easier to notice.

The Galaxy Buds+ are almost carbon copies of their predecessors. The case has a glossy finish that stands out more than last year’s matte one, while the earbuds themselves sport the same familiar design.

But underneath it all lay some really useful upgrades justifying the “plus” suffix in their name. Having truly tackled the comfort side of the equation with the previous model, the key was to deal with audio quality and battery life. Samsung answered the call with some nifty additions.

The company added a third microphone to complete an array that makes a real difference with phone calls. I was surprised at how well calls sounded at both ends, with callers telling me I was almost as clear as holding the phone itself. This was more evident in quieter confines, mind you, but even outside and in busier spaces, the Galaxy Buds+ held up really well.

Samsung also put in larger drivers with a tweeter and woofer to push the envelope on audio quality. I’ll touch on that further down, but the important catch is in how much of a comfortable seal you can get. Thankfully, these earbuds are just as lightweight as they were last year. Three sets of tips and wings offer a good way to find the right combination. I personally found an even snugger fit by using Comply Foam tips, but those are sold separately and don’t fit well in the case anyway. For most people, the included options should be good enough.

There is also a boost in battery life. Samsung rates these at 11 hours per charge, which is an astonishing jump from the paltry amount of the Gear IconX only two years ago. Not only that, but the case offers an additional 11-hour charge through its own battery. 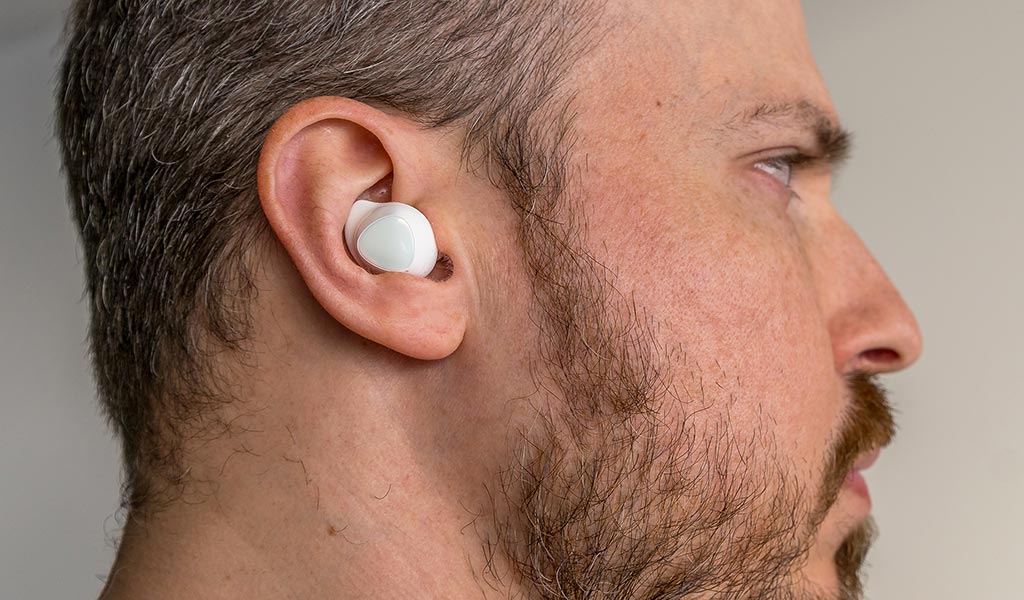 As before, the Galaxy Wearable app handles the pairing process, which is as seamless as the Apple AirPods on an iOS device. The app also retains its role as a customization tool to adjust settings. That includes the controls, though volume still isn’t available through the earbuds themselves.

The control setup hasn’t dramatically changed, otherwise. Both outer sides are touch-sensitive. By default, a simple tap on the left or right plays/pauses. A double tap answers/ends a call or skips to the next track, while a triple tap repeats it.

A tap and hold on the left turns Ambient sound mode on or off, while the right triggers Google Assistant (you could also choose Bixby if you were so inclined). New to these earbuds is a unique Spotify integration that turns the streaming service on automatically. You have to go into the Galaxy Wearable app (where you set up the earbuds in the first place) to select it in place of either Ambient mode or Google Assistant. I tried it and it resumed where I left off on the app. While initially skeptical, the integration is actually pretty neat for the simple fact it reduces the need to launch the app every time.

Other features through the app still include Find My Earbuds—something you hope to never have to use. It can help you find the Galaxy Buds+ if you’ve misplaced or can’t find them by sounding an alarm, so long as you’re within Bluetooth range. And it still only works for the earbuds themselves, not if they’re in the case. Given how small and pocketable they are with the case, that’s always a potentiality, so be careful. 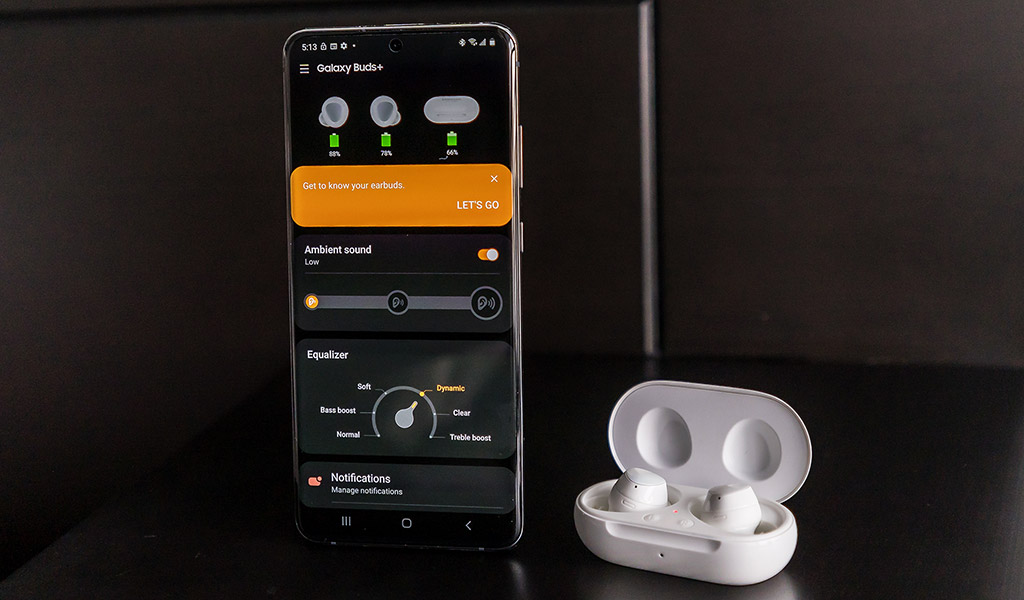 Last year, Samsung managed to get the fit and finish right through a more comfortable lightweight design. This time around, the audio and battery life caught up. I’m not sure the Galaxy Buds+ were any more or less comfortable than their predecessors, to be honest. But hey, that’s a good thing, since they were a joy to wear anyway.

What struck me more was the cleaner sound they produced, courtesy of the dual-driver design squeezing in a woofer and tweeter. These are, without question, the best wireless earbuds Samsung has made to date. They are so far removed in quality from the 2018 Gear IconX that you would think two different companies made them.

It’s about time, if you ask me. Samsung sometimes takes longer to get things right, but when it does, the results are usually satisfying. That’s how I felt listening to these earbuds throughout any given day. For one, they never stung my ears, and for another, I appreciated the clear and clean soundstage.

There are six equalizer presets on the Wearable app, and I’d like to see more. Or at least give users the option to create their own. The presets are okay, it’s just that good sound can get even better with an EQ to tinker with.

As great as they do sound, I wish Samsung pumped up the volume just a little more. I found I had to routinely go to 70 percent or higher when out in public. That was with Ambient mode off and a pretty tight seal. The other issue was that I would accidentally pause or trigger a command while trying to adjust the earbuds into my ears. Not a major problem, but a minor annoyance when it happens multiple times in one day. 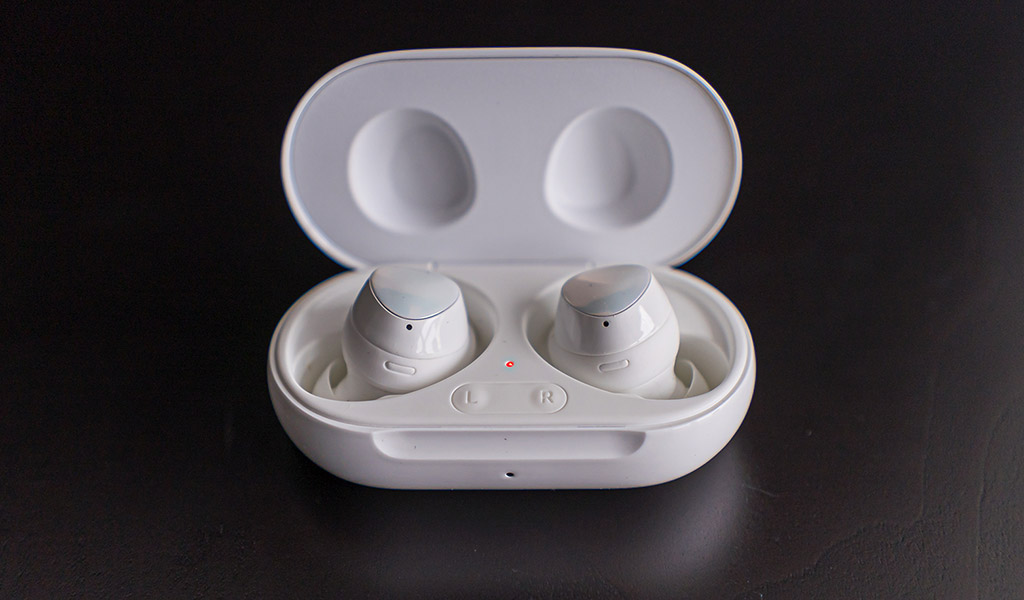 Unfortunately, Samsung couldn’t squeeze in active noise-cancellation, for had they done so, these would be considerably more expensive. They are sweatproof, but not necessarily water-resistant, so beware of keeping them near water. Also, if you do wear them to the gym or for a run, make a point of wiping them down afterward to get rid of leftover salt.

Ambient mode is interesting in that it comes in three different levels. The higher you go, the more outside noise seeps in. It’s a great mode for quickly conversing without removing the earbuds, except you can’t change the intensity without going into the app first. However, it will remember which level you selected and stick to that until you change it manually in the app. I often kept it at the lowest setting, but sometimes used the medium one too.

I mentioned phone calls already, but wanted to follow up with some context. The extra mic on either side is a big reason why callers can hear you better, but they do nothing for hearing them. Ambient mode is partly meant to allow outside noise in so you’re aware of your surroundings during a call, but I often turned it off completely out in public because outside sounds were seeping in anyway.

Still, especially for calls indoors while doing things around my home, they performed wonderfully. No one complained about audio quality except for one ironic instance where I had Ambient mode on, and the mics picked up sounds of a faucet running and crumpling paper to a point that irritated the caller because of how loud those sounds came through. 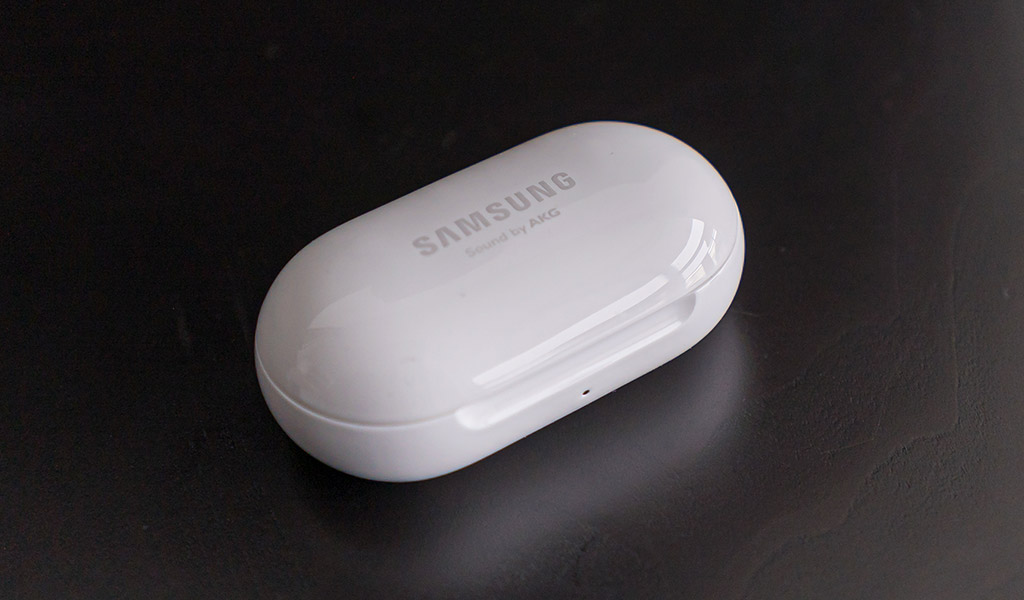 With last year’s Galaxy Buds, I cracked five hours per charge when volume was usually at about 50 percent. This time around, I was getting 10 per charge. It’s a huge leap in 12 months, but an even bigger one from 2018, when the Gear IconX could barely crack three or four.

That the case can also hold an equal charge is of real practical value, though it does take time to fill up the earbuds. Plug in the case to a high-wattage phone charger, and a three-minute charge gets you an hour of playback. Leave it for half an hour, and you may even get half a full charge out of it.

Like last year’s model, the case is able to charge wirelessly. Place it on a Qi charging pad or the back of a Samsung device with PowerShare reverse charging and you can give it some juice. I found that putting it on a Qi pad after a long day would have it back to full by the time the next day rolled around. Of all the features and details of these earbuds, battery life was oddly one that I had no challenge with at all.

If you have a Samsung smartphone, the Galaxy Buds+ are made to work best with them. They also work pretty seamlessly with other Android devices through the Wearable app, and even the iPhone is an option. I would caution against getting them as an iPhone user because not all features are included. More than that, audio is out of sync with video a lot on Apple’s devices, though Samsung may fix that with a patch.

Despite a few minor flaws, the Galaxy Buds+ take some big steps forward in areas that really count. The style, fit and finish was already good, but with better sound and longer battery life, they stand up as one of the best true wireless earbuds available.

The Samsung Galaxy Buds+ are available now in black, white and blue.