Action cameras, like the GoPro and Sony Action Cam, have allowed sports enthusiasts and extreme athletes to capture and share their point of view in high definition video. The results are nothing short of spectacular.

Point of view (POV) videos of surfers attacking big waves, BMX bikers taking off ramps, and snowboarders and skiers carving up slopes look and sound like amusement park thrill rides thanks to these high-definition action cams.

It’s hard to imagine that there could be something more immersive than that, but there is.

While action cameras are great for point of view video, they neglect to capture some of the surroundings. There’s also the problem with the sports enthusiast dividing their attention between their sport and the camera that sometimes needs adjustment—that could be dangerous.

I’ve seen various snowboarding videos with participants using selfie-sticks to get a better angle of the action and realize that, not only are they distracted by having to shoot video, they now only have one hand free. That’s just risky.

This is where drones make perfect sense. Drones can work as satellite cameras that serve as a virtual camera man (who doesn’t have to worry about navigating terrain or obstacles). Whether they are programmed or controlled remotely, drones can now capture stunning videos without getting in the way.

Whether using an integrated HD video camera or carrying a separate action camera, drones can shoot footage and stay at a safe distance from participants, while offering various angles and points of view that no human camera operator can capture. Here are two examples worth looking into. This all-in-one drone makes it possible to take professional-grade aerial photos and video.

It can deliver live video streaming in beautiful HD from your GoPro straight to your smartphone at ranges up to 800 metres. A GoPro mount is included, while the optional Gimbal is sold separately.

This is an ideal next step for GoPro camera users wanting to expand the range and flexibility of their existing equipment.

The 3DR Solo provides in-flight GoPro access, so you can start and stop recording and make changes to your camera settings from the ground (with Solo Gimbal, sold separately).

A Follow Mode feature makes it a possible to track and film a subject automatically. The 3DR Solo also flies at a top speed of 55 mph at up to 400 feet and has a battery that’s good for around 20-25 minutes on a charge. Controls are handled using Wi-Fi connected smartphones or tablets and an intuitive app. It has its own built-in 14 megapixel full-HD 1080p “fisheye” camera that records videos and pictures in a 180-degree field.

With a base top speed of 24 mph and a 12-minute battery life on a full charge, the Parrot Bebop Drone relies on a 3-axis stabilization system that  maintains a fixed angle of the view regardless of the inclination of the drone and its movements caused by wind turbulence. This helps ensure clear, blur-free Full HD 1080p video captures. 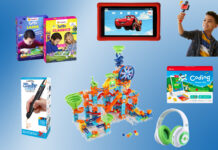