Today I’m reviewing the Intelino Smart Train Starter Set. If you’re a fan of model trains and would like to share your hobby with your kids in a way that’s not only fun for them, but also educational, then you’ve certainly come to the right place. The Intelino Smart Train Starter Set is a STEM-based learning toy for kids from 3 all the way up to 99, and it’s as fun as it is educational. Read on for all the cool details (and watch my video review below) of this awesome little train and track set.

What is the Intelino Smart Train Starter Set? The Intelino Smart Train Starter Set is a model train set specifically designed for kids ages three and up. It’s also a smart product, meaning it’s educational and works with a special smart phone app called the Intelino App, which is both Android and iOS compatible. Shown below is a screenshot of one of the app’s main control screens. As you can see, there’s a fair bit going on here, but I wouldn’t say it’s overly complicated by any means. It’s mostly just fun.

Included with the set is the train itself (which is designed to look like a typical commuter train—in this case one with two cars), enough track pieces to create more than 10 different track configurations (the variously shaped pieces easily snap together similar to puzzle pieces) and a small bag of colour-coded tiles called Action Snaps (shown below). These tiles may be placed anywhere on the track and are read by the train as it passes over them, thus allowing you to control your train via colour-based commands related to things like steering and movement, speed, stopping and ending the train’s route, head and tail lights (the colours can be changed), and various sounds and music. The train has both front and rear sensors that scan the track looking for and obeying the commands of the various coloured tiles. It’s a pretty neat idea!

In fact, it allows kids to learn the basics of programming and coding as they play. By going into the Editor section of the Intelino App and creating unique command strings, kids can make their train perform whatever actions they want to see carried out. This is a big part of what makes the Intelino Smart Train an educational product, but it also adds to the fun.

Fun with the Intelino Smart Train!

The Intelino Smart Train Starter Set is super easy to set up and use. The track only takes a few minutes to build, and the train itself is compatible with many of the wood tracks that come with train sets for small children, so there’s some added flexibility there for creating ever more complex track designs if you have some of those older track pieces kicking around. There are also no electronics built into the track at all (like slot cars have), so the train provides its own power. The train itself is a two car setup, though only the larger (front) portion contains electronics (i.e., its built-in 350 mAh Lithium battery that needs to be charged via the included USB charger, shown below). Charging your train only takes about an hour to complete, and it should give you at least 100+ minutes of play time when complete. My Time as Conductor

Running this train was really lots of fun. Once I had the track all set up as I wanted and my train fully charged, I was all ready to roll. One thing I learned right away was that even though the Intelino Smart Train is app controlled, you can actually just give it a push to get it started. Without ever opening the app up at all, you can send your train off and running all by itself. It’ll actually keep on going too, right up until either you stop it yourself, its battery dies, or it derails and eventually gives up.

Of course, to control things like the train’s speed, sound effects, and all of its other cool features, you do need to open and use the app, which is also super easy. The train quickly and easily connects to your smartphone via Bluetooth, and you have a very nice 30-foot range to work with, so you can control your train from across even a very large room.

Among the features in the app are sound effects like typical train sounds, emergency sirens, and various other noises that add to the fun of running your train. You can also make the train travel at any of 3 set speeds, or you can use an on-screen slider to speed up or slow down the train at will. I particularly enjoyed making the train move at its fastest speed (a whopping 3.3 feet per second), but this did occasionally cause the lighter car to derail. The main driving car hardly ever derails due to the extra weight of its electronics, but the smaller car is feather light and can easily be bounced off the track at times.

The Intelino App also has an editing section where you can go to create the various control commands that will make your train do whatever you want it to. There are actually 17 different default commands (tied to the coloured tiled discussed above) that you can string together in various ways to make the train perform a sequence of different actions. These are among the more educational aspects of the set, but I can honestly say I enjoyed the straight up driving the most. It’s a really fun little model train set no matter which elements you most appreciate.

Please take a brief spell to check out my complete video review of the Intelino Smart Train Starter Set. In it, I show everything that’s included in the set, I talk about its features and benefits (including how to use its smartphone app), and I provide plenty of footage of the train in action. It’s a brief video, but it’s also fairly informative: I really like this Intelino Smart train set. In fact, before I received this assignment I was saying to someone at Best Buy that I’d love to have a model train set to test and review, so this one came along at just the right time. If you or your child enjoy model trains, or if you value smart and STEM toys as a part of your child’s early education foundation, then I really can’t recommend this set enough. It teaches the basic principles of coding and programming, it works like a typical model train set, and (best of all) it’s super fun. Highly recommended! 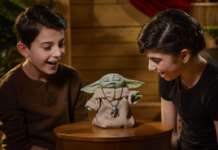 May the Fourth be with you: Star Wars gear to celebrate your fandom