It’s a bird, it’s a plane, no, wait, it’s a giant mechanical spider! It’s the “HEXBUG” Robotic Spider Kit by VEX Robotics, and it’s every bit as much fun as you’d expect a giant spider to be! Keep on reading if you’d like to learn more about this fun and formidable robot! 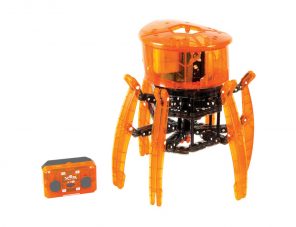 The Vex “HEXBUG” Robotics Spider is a large, mostly clear orange, mechanical spider that you assemble yourself from over 350 different parts & pieces, including several gears, 2 electric motors, one distance sensor (to keep HEXBUG from running into obstacles), and a brain to receive all of the inputs from the controller & coordinate the spider’s movements.  HEXBUG, which is 2 legs shy of being a proper spider, is considered a STEM toy (helping to teach kids the basics of Science, Technology, Engineering, & Mathematics), and is recommended for those ages 8 and up. I think that this is an appropriate age range for a set like this, and I expect that most kids within this range (particularly those that enjoy mechanical & building toys) are likely to enjoy the HEXBUG quite a bit. I know I enjoyed it, even if I am a few times older than that beginning age. 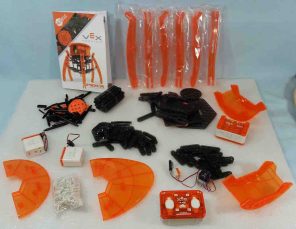 The primary play pattern with toys like the HEXBUG is the building aspect of the toy. Of course, you can attempt to build anything that your mind can conceive (within the confinements of the included components), but the real fun is in building the spider itself! This project took me roughly 2 hours to complete, but I could see it taking considerably longer if things didn’t quite go smoothly. In fact, I did have a couple of setbacks myself, and things could have been much, much worse if I hadn’t had some experience with these kinds of toys in the past that helped me to navigate the rough waters. What it all boils down to, is that there are certain parts of the HEXBUG that are almost identical to other parts, though not quite identical. While the instructions for this set are absolutely terrific, if you confuse some of the parts that look 99.9% alike, you’re not going to assemble the HEXBUG properly. The slight confusion that results from this similarity of parts could prove frustrating to some, but in the end, it just adds to the challenge of building the set. Once you’ve got everything together properly, there’s an even greater sense of accomplishment for having gone through a bit of adversity. 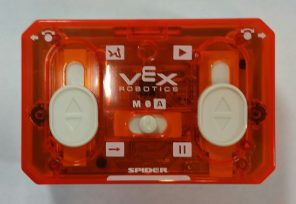 The secondary play pattern with the Vex Spider is movement. And while I found the HEXBUG incredibly fun to build, I was especially excited to finally get its motorized components up and running. As I mentioned above, to get your spider going requires a small orange remote (shown at right). This remote consists of 1 sliding On/Off switch (which also allows you to select between manual & autonomous modes) and gives you complete control over the fully assembled spider. There are also 2 sliding buttons that serve as joysticks for the spider. The left slider turns HEXBUG’s head (slide the button up for a left turn & down for a right), and the right slider allows the HEXBUG to walk either forward or backwards (again, depending on which direction you slide the button). The remote itself requires 1 x 9V battery to function, and this battery comes pre-installed in the set. Additionally, the HEXBUG’s brain (& body) requires 3 x AA batteries to operate, but you need to provide these yourself. 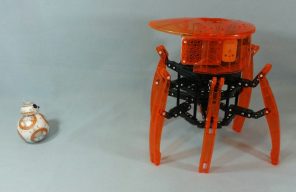 One thing I found troublesome when playing with the HEXBUG was that its autonomous mode didn’t work half so well as its manual control mode. In manual mode I could make the spider walk all around the house in whatever direction I wanted, and I could make its head turn as much as I wanted in either direction. In its autonomous mode, HEXBUG is meant to walk around all by itself without any input from you, and it’s meant to avoid obstacles thanks to its built-in distance sensor. Unfortunately, this big bug seemed to have a great deal of difficulty deciding where to go. At first I thought it might be that the sensor was picking up objects all around that my HEXBUG wished to avoid, so it just couldn’t do anything but move about in very small circles. However, even after I moved the HEXBUG to a more open area, it still reacted in the same confused manner. 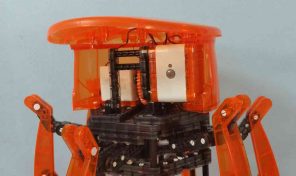 Because of this behaviour, I have to consider HEXBUG’s autonomous mode a bit of a bust. Still, the manual mode more than makes up for it. HEXBUG doesn’t exactly burn across the floor with any great speed, but it does react perfectly to the inputs I give via the remote, and it’s actually quite a bit of fun playing with this toy whether that play consists of building the HEXBUG or of making it roam about the house. By the way, I was most impressed to learn that switches within the HEXBUG’s robotic brain may be combined in up to 64 unique configurations. This means that kids can experiment as much as they like with various configurations. I had my hands full just trying to get everything assembled in the official configuration, so I wonder how HEXBUG would react if I set it up differently… I guess I’ll leave that to all of you to test out.

Please take a few moments to briefly view my short video overview of the Vex Robotics Spider. You’ll enjoy (hopefully!) a brief description of my experience of building the bot as well as clearly seeing how it moves & what it looks like in action: 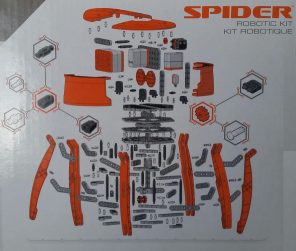 In the final analysis, HEXBUG is a fun & impressive set as well as, I think, a successful STEM toy! I don’t doubt at all that kids can learn a lot about robotics from HEXBUG, and they’re sure to get some great experience with problem solving as well. When such goals can be achieve in a way that’s also fun, then the end result is a toy that’s a winner! I wish that the autonomous mode worked better, but maybe that had something to do with me. I can just never be sure with these things. I may just be doing something wrong myself. In any case, the HEXBUG is a worthwhile toy for any child with an interest in building (or other, similar) toys, and you really can’t go wrong with giving them one of these sets. Just remember that the target audience here is 8+, and also remember that it might be more fun and meaningful if you assemble HEXBUG together. Either way, enjoy your HEXBUG & I’ll see you in my next post!