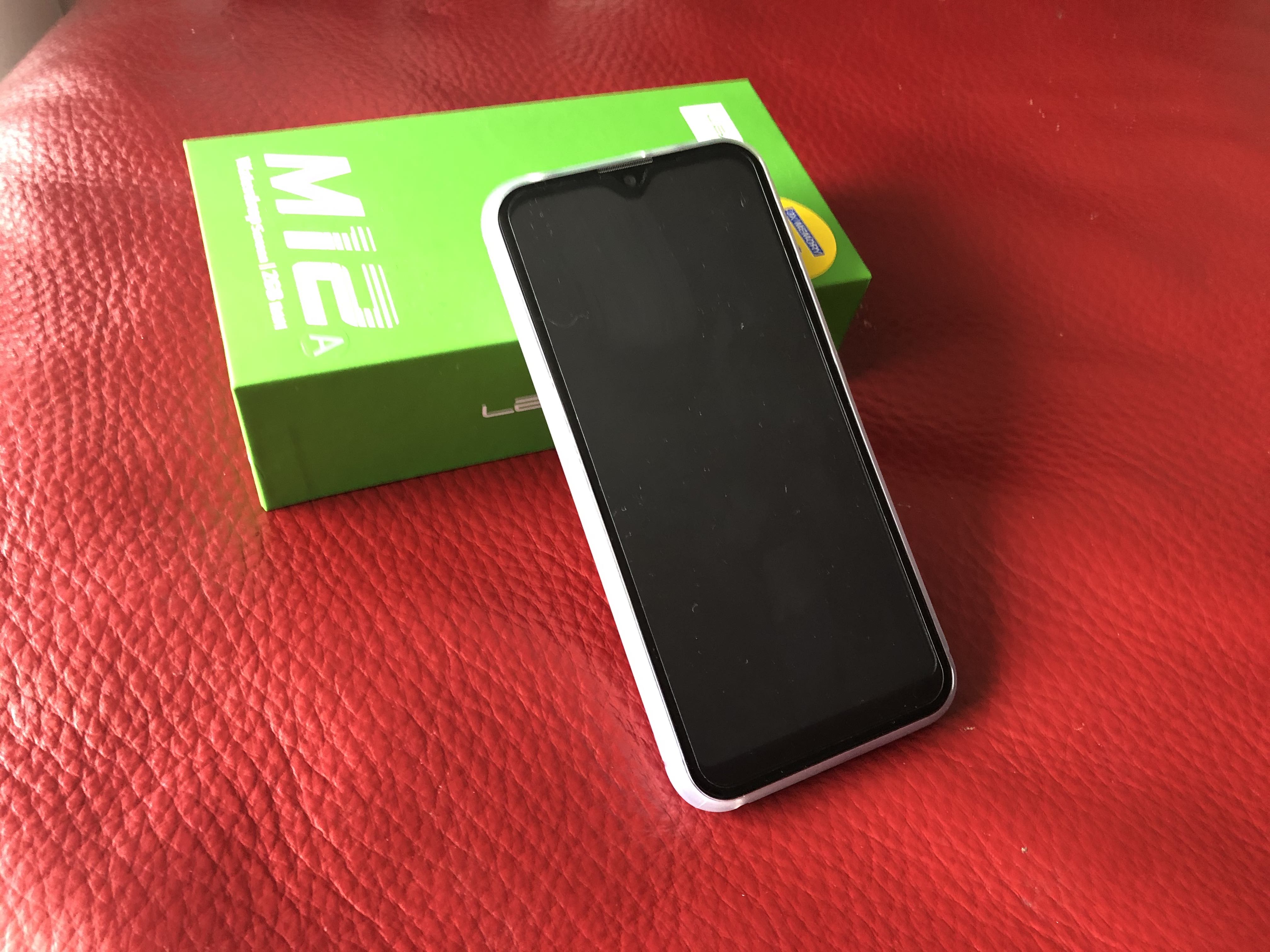 Smartphones are expensive. Some of the most feature-rich devices have all of the bells and whistles that you could ever imagine but have a price tag to match. If you only use a smartphone for texting, calling, and taking pictures—and you only need a few apps—then you need a device that provides all of the basics while not breaking the bank.

This is where the Leagoo M12 Budget Smartphone comes in. This budget-conscious device comes packed with all of the basics at a very reasonable price tag. In this review, we will break down what comes with the device as well as its design and performance.

When you open up the green Leagoo M12 smartphone box, you find all of the essentials and a little more. The package comes with the phone, a clear rear silicon case, battery, power adaptor and micro-USB cable. It also comes with a 32GB microSDHC card as a bonus.

Unlike a more feature-rich phone, this device’s battery is removable and outside of the smartphone when you first open the box. Taking the phone apart is relatively easy if you have nails. It has a very noticeable ridge between the plastic back of the phone and the main chassis that you can easily open with a little pressure. This is likely the reason why the phone comes with an included silicone case.

Once you have inserted your SIM card (sold separately as this is an unlocked device) and memory card (the phone also has 16GB of internal storage), you can put the phone back together.

You shouldn’t expect to use the phone right away, however. My review unit came without a charge, so I had to charge the phone before I could use it. 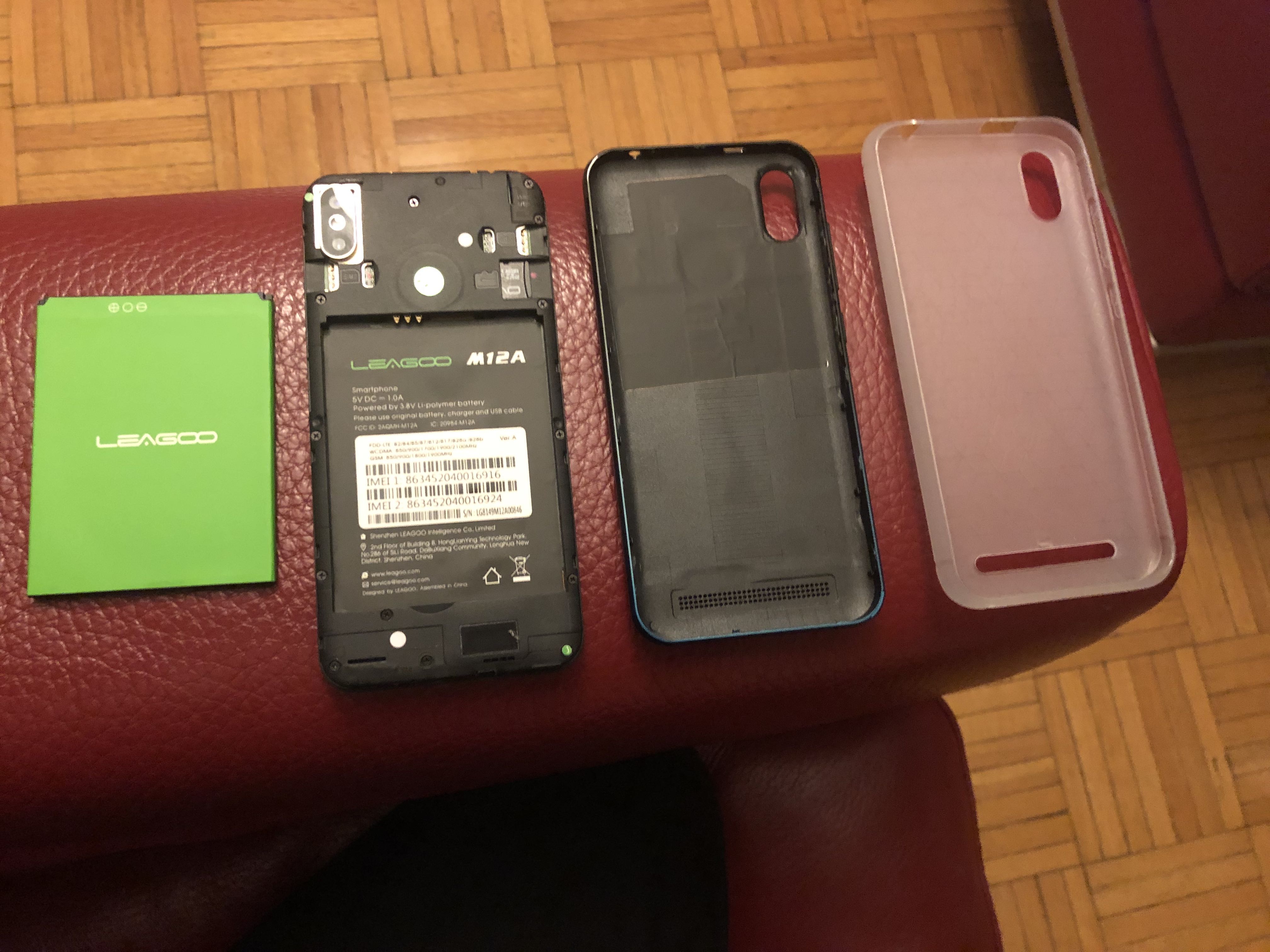 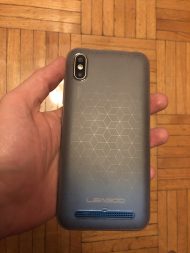 This phone’s design is comparable to many smartphones on the market today. There are no physical buttons on the front of the phone and there’s a teardrop notch at the top of the screen for the front-facing camera. The screen itself can get quite bright, but the 251ppi (pixels per inch) screen may leave a little to be desired from a pixel density perspective.

I was watching 720p video on YouTube and the video quality was good but not sharp. Most modern phones today will have 300+ ppi screens for mid-level phones and 400+ ppi screens for premium phones, so if you watch a lot of YouTube or Netflix videos, you may want to take a closer look at the phone’s screen. This will not be an issue when you cast video to a Google Chromecast, for instance.

The speaker is on the bottom-back of the device and the micro-USB charging port is on the top of the device. Volume controls and the power button are on the right side of the device. The phone doesn’t feel cheap, but it does feel quite fragile because of its very light weight. If you purchase this phone, you may want to invest in a screen protector.

This phone impressed me in some keys ways. First, I’d like to speak to the phone’s battery. The phone lasted me the entire day with my use habits. I also tried to leave the phone off to the side for three days over a weekend, checking it occasionally where it lasted the entire weekend with power to spare.

Because of the long-lasting battery and the very reasonable price, I immediately thought of some special use cases for this device. One example is that the phone can act as an emergency phone. With a pay-as-you-go plan, you could power off this device and place it in your car’s glove box for emergencies. You could also give it to older parents who don’t frequently use technology.

The “phone for parents” use case is perpetuated by the camera on the device. With good lighting the camera can take good photos with the primary 8-megapixel sensor. Motion can be challenging for the phone, but as long as you are taking photos while standing still, you will be able to get a good quality photo out of the device. Video on the device is decent, but again moving while taking video provided less-than-ideal video quality.

The Leagoo M12 is a phone that any Android user will be very familiar with. The device runs Android 9.0, Google’s phone operating system update from last year. From a performance perspective, however, the phone lacked the snappy responsiveness that a more powerful phone would bring to the table. App downloads, for instance, took over a minute in some cases to start.

Some apps, like Twitter, were quite sluggish, when the feed would be slow to scroll at times. Other regular apps for me performed well enough (Pocketcasts, for instance). Games were very difficult to play on the device. When I tested it with Pokemon GO, the game was incredibly sluggish on the Leagoo M12. Older games, or games with adjustable graphics, might be best for this device. 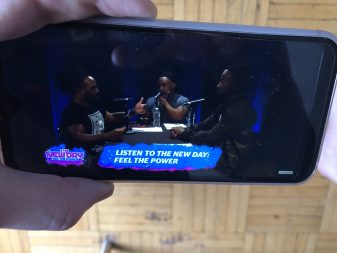 The phone packs the essentials into a phone that hovers around the $200 price mark, which is just a fraction of what a mid-range or higher-end smartphone will cost. With that attractive price tag, you will get a surprising amount of performance out of the device. It isn’t meant to be compared to a premium smartphone and will be a very good fit for a few groups of customers.

As mentioned previously, this may be a great phone for a parent especially if they are moving over from no phone or a flip phone. This device would be great for a child’s first phone. It may work well as an emergency phone or a phone that you purchase to temporarily replace a phone that has been broken while you save up for a new phone.