Best Buy Blog
Home Smart home What technology can I control with my voice? There’s been an explosion in voice controlled technology. The number of products that can be controlled by just asking has grown amazingly; there’s Google Home, Amazon Echo and a yet-to-be released Apple Home device. Plus there are speakers and headphones that also allow you to forgo typing and just make a request.

What can voice control technology do?

With smart digital assistants, you can have a virtual assistant at the ready. Devices that employ voice controlled digital assistants can set timers and alarms for you if you ask them to, or give you weather forecasts, answer math questions, listen to e-books and podcasts, and even add items to your grocery list — all without ever having to pick up your phone or type.

Voice control: Who you talkin’ to?

Depending on the device you choose you’ll have access to a variety of robot digital assistants:

Attention, Alexa
Amazon’s slightly robotic digital helper comes standard with Amazon Echo, Echo Plus and Dot devices. It’s also available on some speakers (like Sonos, but not yet in Canada). There are also wireless speakers that have the power of voice control too; like Bose QC 35 II headphones, the UE Megablast speaker and Apple’s Beats Studio 3 wireless headphones.

Google Home is a smart speaker that can not only play music but it’s a fully digital concierge. Want to know more about what this smart home system can do? Read our review. There’s also the Google Home Mini for smaller spaces.

Brand new to Canada, Amazon’s Echo line is here and it’s being snapped up by the smart home-curious.

Read Ted’s review of the Echo or check out the smaller Amazon Echo Dot. Ultimate Ears MEGABLAST portable speaker comes with Amazon Alexa built-in. It connects directly to the cloud with Wi-Fi so you don’t need a smartphone to take advantage of this feature. Just jump on Wi-Fi or any mobile hotspot to enjoy voice-controlled music and the full range of Alexa’s skills, all from just about anywhere.

Several headphones now allow you to contact the wireless digital assistant on your smartphone with a touch too.

Google Assistant comes standard on the QC 35 II headphones. Android users can play music, receive texts, manage your daily tasks and get answers—all with your voice. You access the assistant by pressing and holding the Action button. Get access to Siri with a press on the Beats Studio 3. You can get your daily schedule, set reminders and alerts and even make and review phone calls. Read the review.

The multifunction button on the Jabra Elite Sport headphones lets you access the digital assistant on your phone, whether that’s Google or Siri. Read more about them in the Best Buy review.

The multifunction button on these headphones also means you can access the digital assistant on your phone, whether that’s Google or Siri. I recently reviewed the Rockpods, and they’re surprisingly great. Read more about them here.

Expect to see more and more voice controlled devices in the smart home space in the next year or two… and from there, it probably won’t be long before you can talk to your fridge, stove and even your house too. 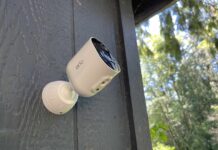