Face it, parents. As much as you want to keep your young kids away from smartphones and tablets, they have become an inevitable part of society. And realistically, being able to use these devices effectively is a skill that every child is going to need in his future.

This doesn’t mean, of course, sticking your child’s face in front of an iPad for hours on end while he watches television shows or plays mindless games. If you’re going to let your child play with a tablet, seek out educational apps that are both fun and promote learning and problem-solving.

The Tiggly Learner Kit is a good option that combines both physical learning products with interactive tablet play.

The set comes in a package that might remind you of a DVD or Blu-ray box set. There are three sets, or learning kits, each of which focuses on helping your child improve his skills in areas like vocabulary, comprehension, math, and shape recognition: Tiggly Words, Tiggly Math, and Tiggly Shapes. Each consists of physical pieces that your child can place atop a mobile device screen (they work with select Apple and Android devices) to register a reaction.

Each one also works with multiple Android or iOS apps, for which you receive free download codes in the box. All of the apps can be purchased separately, and played without
the interactive toys as well.
All of the products are BPA-free, and come with a cute carrying pouch so you can keep them neatly tucked away in your bag for outings. Or, if you use them at home, you can even keep them in the boxes and place the set neatly on a shelf, alongside your books. I did find that in some cases
the toy would not register on the screen, requiring that my son press it harder or turn it around and try in another orientation for it to work. But for the most part, all of the pieces worked well.

The best part: all of the apps work without a Bluetooth or Wi-Fi connection, and the pieces don’t require batte

The idea with the toys and apps is to help your child (aged 4-8) build his vocabulary and develop early reading skills. The games are more suitable for 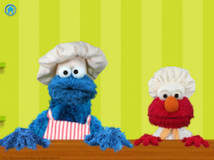 younger kids than older, I found.

With Alphabet Kitchen, my 4.5-year-old son’s favourite, kids help Elmo or Cookie Monster make some word cookies, using the letter pieces as cookie cutters. Cookie Monster will start spelling a word and ask the child to stamp the screen with the missing letter. For example, he might cut out the letters “D,” “R,” and “P,” and the child must place the letter “O” to spell “DROP,” or “I” for “DRIP.” Cookie Monster will sound out the word, then bake a cookie in its shape. Or, choose Elmo and he asks you to place a letter atop a piece of dough to see a word that starts with that letter. Once the cookie letters are “baked,” decorate them with virtual ici 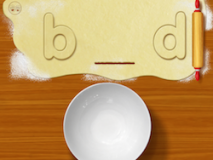 ng, and munch away, or share with Cookie Monster. Your child can also snap a photo of himself using the device’s front-facing camera, and save it in the tablet’s photo library.

In Tiggly Submarine, your child swims through the ocean, exploring over, under, and behind doors, using a letter toy to knock. Hear the phonetic sound of the chosen letter, and see and hear a word that includes it (for example, “bed” for “e.”) 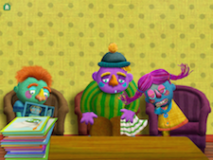 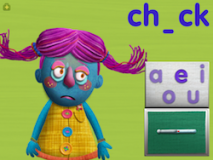 Without the letter toys, this particular app is better suited to older kids. The child would simply tap on vowel letters on the screen to complete words. It might serve up a word like “mouthwatering,” with all of the vowels missing that the child must insert them in the right order to complete the proper spelling.

Last is Tiggly Storymaker, which takes the interactivity to another level. The child is presented with two letters, and must use one of the vowel toys to create an actual word. If it’s a proper word, a picture of the object will appear. If it’s not, the word will jump off the screen on a spring. Pull down on a virtual magnet at the top of the screen to grab a letter and swap it out to start forming new words. The name of the app is a bit misleading, as one might think that it will create stories for you based on the words chosen. This isn’t the case – you must then take the words, and record your own story. It’s great for creativity, but might not be as fun for young ones who are looking for a story to be told to them based on the words they worked so hard to complete.

includes four counting toys and works with three apps that are suitable for kids aged 3-7: Cardtoons, Chef, and Addventure.

With Addventure, the shapes help your child get from one side of a game board to another by placing and adding up the correct number of shapes, including bridges for adding and ladders for subtracting. In Chef, which is my son’s favourite for this set, you must tap the appropriate number of squares onto the screen to correspond with the desired number of ingredients. And Cardtoons lets kids make fun pictures by tapping the pieces onto the screen to turn them into interactive shapes that you can then animate. This one isn’t high on the education scale, but fun nonetheless for preschoolers. Learn more about all three apps in my previous review of the Tiggly Geoshapes and Counting Sets, which you can also buy separately.

The four apps that work with the four Tiggly Shapes (circle, square, star, and triangle) are Safari, Stamp, Draw, and Tiggly Shapes Got Talent. These apps are suitable for kids aged 2-5, and incorporate more “fun” for toddler-aged kids.

I discussed the first three in detail in the aforementioned review, but here’s a refresher: with Safari, the kids place shapes on the screen to create cute virtual animals (e.g. two circles and two triangles transform into a pig.) With Stamp, the child places the shapes on the screen as if to stamp them, and watches an interactive scene appear as he adds more and more. Then, save it as a video clip or add it to the device’s photo library. My son’s favourite from this lot was Draw, which uses the shapes alongside a library of animated eyes, nose, ears, mouths, hats, and other body parts to create funny creatures. 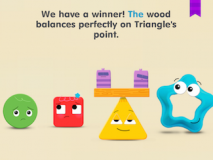 He also enjoyed Tiggly Shapes Got Talent, that centres around the star shape (presumably a rock “star”) who’s holding a competition game show among the other shapes to find out which is best suited to accomplish different tasks. For example, which shape would be best to help a car move? Or which would help make a seesaw with a plank of wood? There’s only one game, however, so an older child might get bored once he’s already done it once or twice and knows the answers. That said, there are other components to the app, including being able to dress up each shape in cute costumes, or record stories using the shapes.

While some of the app games are better than others, the Learner Kit includes a nice set of toys and app download codes that will help your child learn everything from spelling words, to doing basic math calculations while having tons of fun. It’s great that the apps can be used with or without the toys. Though the addition of carrying pouches are a nice touch so that you can easily bring the toys along to keep the kids entertained during a long road trip, or even plane ride. Remember, the apps don’t require a wireless connection, which is an added bonus. But despite the age rating that goes up to 8, I’d suggest the Learner Kit for kids much younger (2-5) if you want to get the most out of each set and all of the apps.