First, I feel it is prudent that I clarify something. A “smart watch” is not a watch through which you can take calls by bringing your wrist up to your mouth and chatting away like an undercover operative. I was upset to learn this. Rather, it is a watch that connects to your smart phone via Bluetooth to deliver notifications right to your wrist so you don’t have to pull your phone out of your pocket or purse and fuss with a password to see who just called or texted you.

The idea here is that you can stay connected to your phone without being gluedto your phone. With a smart watch like the MetaWatch STRATA, you can glance at your wrist every time an alert comes through and determine whether or not you need to respond right away, or if it can wait until later. According to MetaWatch, this is called HANDS FREEDOM™ and is ideal for when you are on the move or exercising. 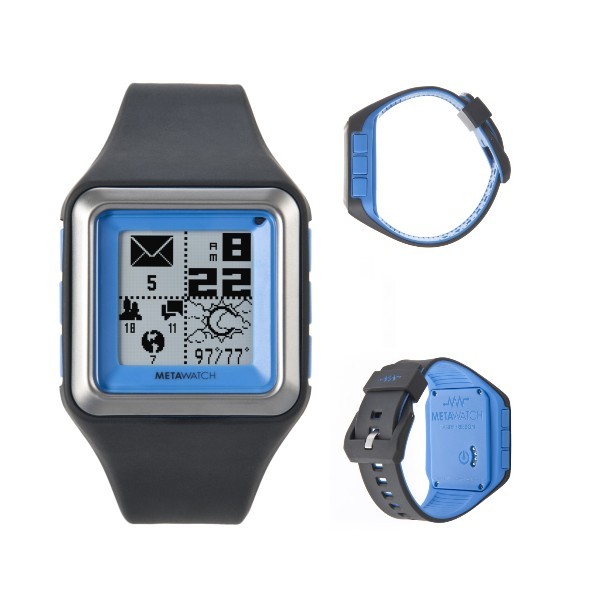 I have to be perfectly honest here – the design of the MetaWatch STRATA is not exactly fashion forward. In fact, its 1-inch, 96 x 96 pixel display and bulky face is reminiscent of a calculator watch my brother coveted in the late 1980s. It’s a very masculine design and certainly doesn’t match my new Cole Haan heels, that’s for sure. However, its double injection moulded polyurethane body gives it  a 5 ATM rated water resistance, which means you can take your STRATA in the shower, on a run in the rain, or into the pool, all while staying connected.

Another positive is that the STRATA is available in a range of colours, including stealth (black), olympian blue, optic green, and tangering. It’s screen is “Polymer Network LCD with Memory in Pixel Technology,” which means that it can be read equally well by moonlight and in the brightest sun, and is made from mineral hardened, scratch resistant glass, so is extremely durable.

Each side of the watch face is equipped with three buttons that control a light for the watch face, music playback, status (including Bluetooth connectivity and batter level), as well as up to four different home screens. 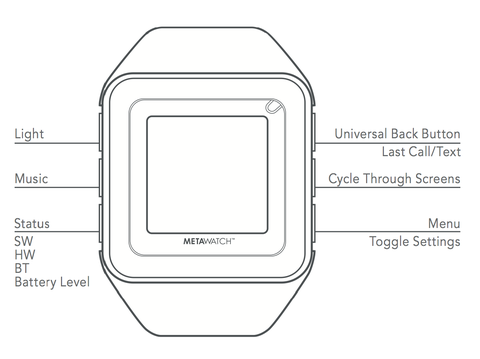 When I first opened the box, I thought the instructions were missing. They weren’t. Included in the box was a single piece of paper with warranty and serial number information. Chalk it up to a severely fractured attention span, or a really long day, but it took me a solid five minutes to see the text at the top of the page that told me to go online for “Quickstart Instructions.” 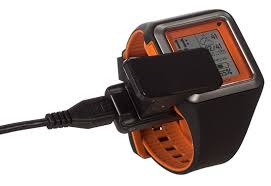 The instructions sounded simple enough. Step 1 – Open the box and charge your phone. Ok, seems pretty self explanatory, but it took all my powers of deduction to see that the little clip gizmo that comes with the watch has four metal contact points that are a mirror image of the four contact points on the backside of the watch face. You need to clip that gizmo to the watch, and then connect the gizmo via the included USB micro cable to your computer to charge.

The good news was that it only took about three and a half hours to fully charge, and then I was ready for the next step. Step 2 – Install your MetaWatch Manager (MWM) app. Easy! Done.

Step 3 – Get ready. This is the step where you are to connect your MetaWatch to your phone via Bluetooth. Sounds simple; I’ve done it many times before with other devices, but for some reason, I had to restart my iPhone several times for the MetaWatch to appear in the list of discoverable Bluetooth devices. I Googled this phenomenon and as it turns out, I am not the only one to have this issue, which made me feel a little less technologically inept.

Once connected, I was on my way.

One of the greatest things about the MetaWatch STRATA is how easy it is to customize it based on your personal preferences and needs through the free MWM app for your iOS or Android device. You can create up to four screens, each with different widgets. Each screen is broken down into a quadrant, which can filled with single, double (horizontal or vertical) or full screen widgets, such as time, weather, calendar notifications, email, text messages, and so forth. To scroll through your screens, you just need to press the middle button on the right side of your watch face. 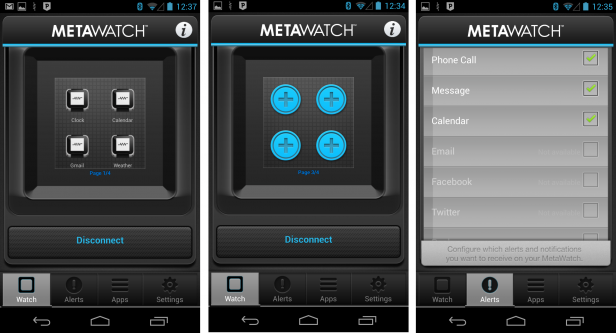 As alluded to above, the STRATA is capable of displaying a wide variety of widgets including the time and local weather, and can provide calendar, email, text, and incoming call notifications, complete with caller ID. On top of these core functions, the STRATA can act like a remote control to play and pause music playback, which is especially useful if you are in the shower, or if your headphones lack dedicated controls.

You can also receive notifications from Facebook and Twitter, and if you are a sports fan, can customize your home screens to include NFL, NBA, or NCAA basketball scores.

Other widgets include a stock widget that keeps you up to date on stock prices, and a “Link Alarm” widget that lets you know when your phone is out of range, which is ideal for those among us who tend to unknowingly leave their phones behind. It can also replicate alarms set up on your iPhone or Android device. A running and cycling app are also in the works.

Since all notifications on the STRATA come in the form of a vibration, you may not want to receive them for all your widgets. Perhaps you’d like to be alerted to all incoming calls and calendar notifications, but Facebook and Twitter updates aren’t essential. Not a problem. Through the MWM app, you can manage which alerts are sent to your watch. Whatever works for you, works for the STRATA.

Aesthetics aside, the MetaWatch proved to be quite useful. I have unfortunately become known for constantly missing phone calls and text messages as a result of leaving my phone on silent at the office. But by setting up the STRATA to alert me to incoming calls, I was immediately alterted to all calls, and could decide who to respond to and who to ignore (like that darn 1-866 number that refuses to leave me alone).

Getting used to which button controls what was a bit of a challenge, but after a few days, it was second nature. I even found myself using the music controls to play and pause songs on my walk home from work, even though my headphones have built in controls.

After a week of use, my annoying habit of constantly looking at my phone began to fade; but was replaced by an incessant need to look at my wrist.  That said, looking at your wrist is far less intrusive than glancing at your phone – especially when you are out for dinner, in a meeting, or otherwise engaged.

I definitely think there is a place in the market for a smart watch, especially as we are all becoming increasingly disassociated with the world around us in favour of our small digital screens. Would I purchase a STRATA? Yes – but only when the design is more in line with what I could see myself wearing on a daily basis.

Best Buy has all of the latest wearable technology that you are looking for.