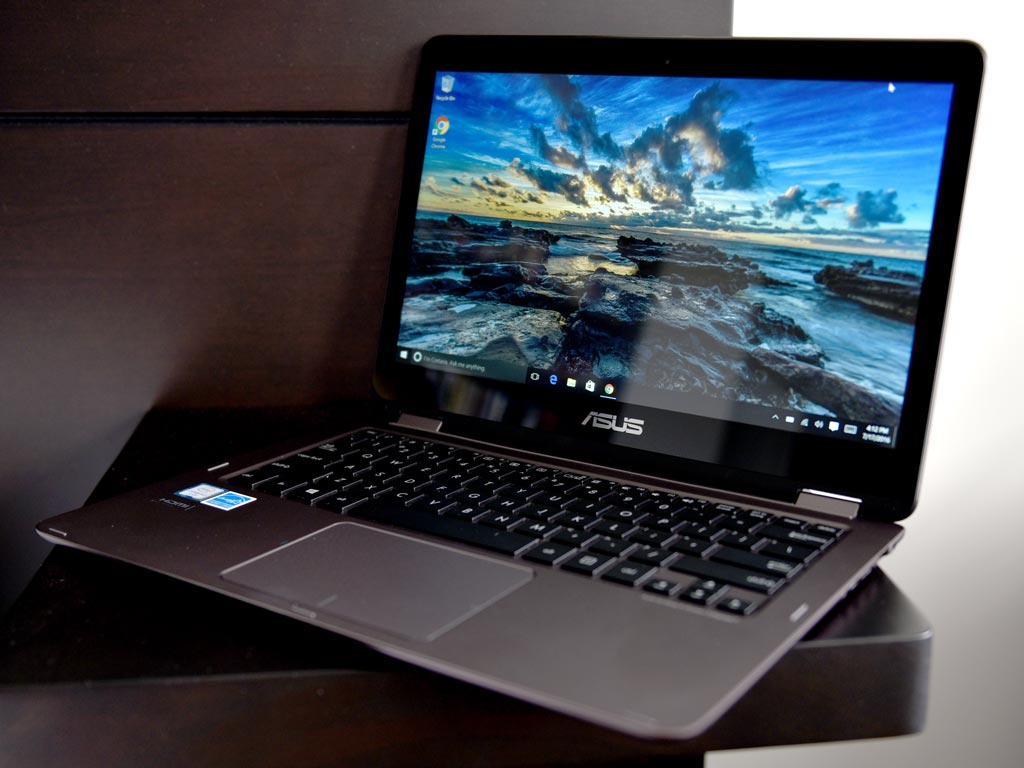 The concept of a laptop has shifted in the last five years to include a greater variety of models and form factors that can alter or expand usability. The Asus ZenBook UX360 is a hybrid PC that can act as a tablet when fully flipped over a full 360-degrees. How it does that isn’t new, but the combination of design, performance and affordability might be just the right mix to be appealing to anyone looking for something like this.

Like the Lenovo Yoga line, the UX360 flips backward to go into “Tablet Mode” on Windows 10. That disables the keyboard and trackpad, essentially giving you unfettered access to a 13.3-inch touchscreen. Not only that, but the specs (at least on paper) give the impression that this convertible hybrid has some muscle under the hood.

What’s initially most obvious about the UX360 is its look and feel. The brushed aluminum body has a nice vertigo treatment on the top that seems to fit in well with the device’s concept. The bottom is plain, but in both cases, they are prone to fingerprints and smudges. At 13.9mm thick and weighing just shy of 2.9 pounds, it’s portable with a little heft.

It runs on a 0.9GHz Intel Core M Skylake processor with 8GB of RAM and 500GB SSD storage. The 13.3-inch LED display is bright and vibrant, even if the pixel density doesn’t seem quite as sharp as a really high-end tablet or laptop. Equally important is the colour gamut, which appears to be richer than other hybrids that are in the same price range. Interestingly, the UX360 has no fan inside so as to reduce noise and help the battery a little.

On the one side are a USB 3.0 port, SD card slot, volume rocker and power button. The other has a USB 3.0 port, USB-C port, micro-HDMI and headphone jack and AC adapter port. 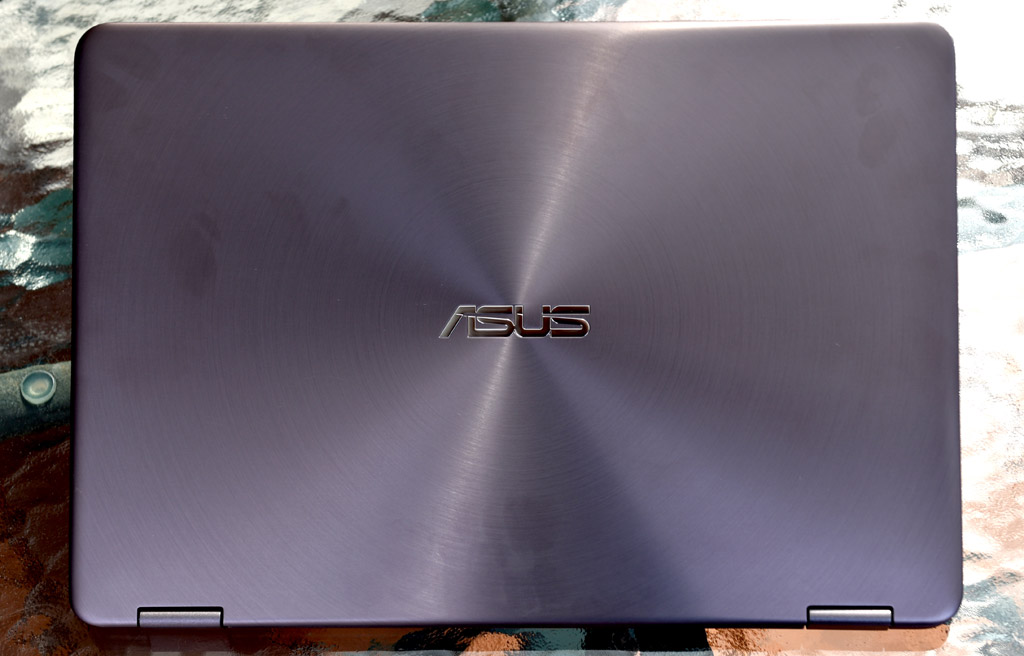 As noted, this is a Windows 10 device, so the latest updates from Microsoft do keep it current. For the most part, there isn’t a lot of pre-loaded software out of the box, and the stuff that is included, isn’t exceptional. For example, the Flip Lock app is redundant because Windows 10 already asks to lock the UX360 in laptop or tablet mode once flipped in either direction. An Audio Controller program also did nothing of any real consequence to my ears.

Unlike Windows 8, Windows 10 just feels more at home in both laptop and tablet modes, and that helps the UX360’s cause. Downloading apps and storing files is easy to appreciate because of the storage available, except I always remind myself that I’m downloading desktop software, and that’s not always going to be a perfect fit in tablet mode.

That said, the UX360 is a pretty open book. Customizing the desktop is the same as it would be with any other Windows 10 machine. For newcomers to this version of the OS, the learning curve isn’t too bad, but does take some time, requiring patience.

The 0.9GHz clockspeed of the processor might seem like the UX360 is more likely to crawl than run, but that’s not really true. In my experience, the overall speed of the unit was somewhere between a tablet and laptop. Being a device that runs a desktop/laptop version of an operating system (Windows 10), the UX360 functions like any PC could and would. Tablets generally run on leaner OS’s with mobile apps, not full-fledged desktop apps.

And so, what happens is that the navigation and functionality is also hybrid by nature. I’m talking about little things, like smaller icons or points to touch on the screen or an interface that doesn’t quite feel like a tablet, but definitely feels like a laptop when navigating with the trackpad.

This is not unusual, or even bad. The UX360 is a device of options. I found myself habitually touching the screen to make selections when in laptop mode, unless I was typing to do a search or navigate a site, where I might defer to the trackpad. 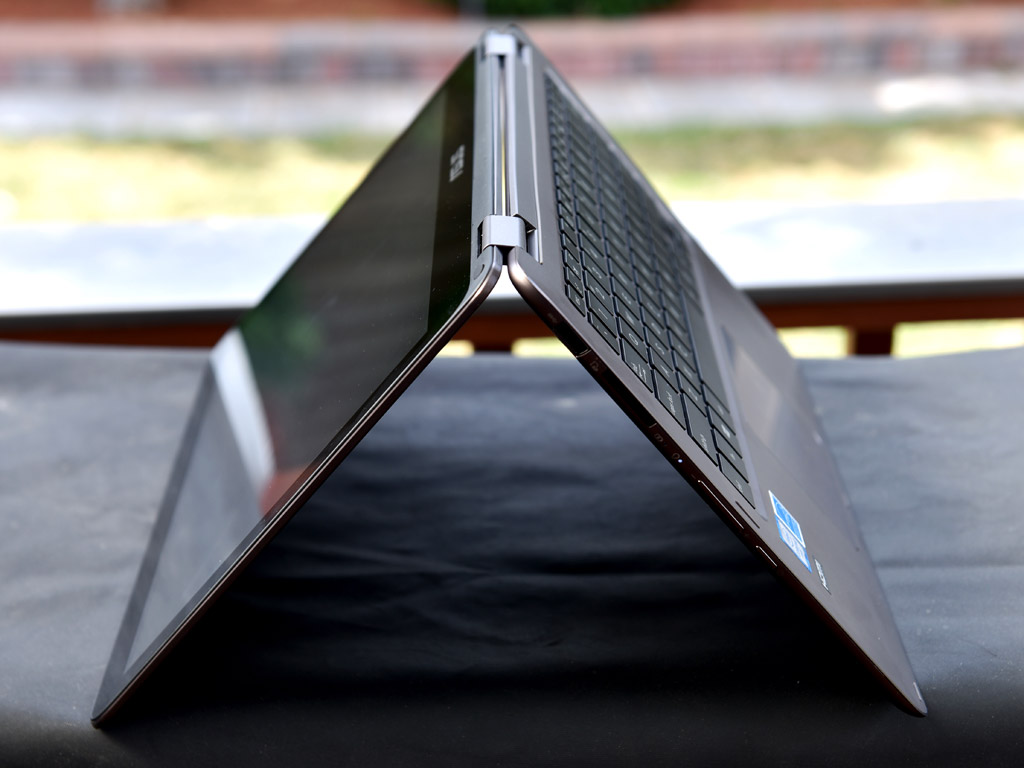 In tablet mode, I found the screen size to be easy to get used to, and one of the orientations I tended to go with most often was setting it up backwards in a tent-like form to watch video while having a meal or lying on the couch with it on a table. Reading articles was particularly nice because the UX360 can do portrait orientation in tablet mode, making a website look much longer than it normally would. I can imagine that working on something visual or creative in that orientation would also be easier.

A noticeable weak point on the UX360 are the built-in speakers. They are awful, and while I can understand it because of the lack of space Asus had to stuff in better speakers, they aren’t powerful enough. This became much less of an issue when I used headphones or Bluetooth speaker, where sound quality naturally boosted to more acceptable levels.

In addition, this is most definitely not a gaming or video-editing laptop or tablet. Casual games are fine, but anything that needs to push serious graphics won’t run well. Video-editing is also demanding of processor and graphics performance, and the UX360 isn’t quite there for that. Photo-editing is fine, but only basic video-editing will feel fluid here.

It’s also best to measure expectations on battery life. The UX360 is decent, but not amazing. Asus has rated it at 12 hours, but as is generally the case with laptops, real-world usage alters those numbers. I managed to get less than nine hours when playing a lot of video on YouTube and Netflix. I got about 10 hours with mixed usage of streaming, browsing, email, some word processing and social media. Not bad, but again, not incredible.

The UX360 is a utilitarian device that also happens to look good. Those two don’t always go hand-in-hand with hybrid or convertible PCs, but I felt like it was in this case. The device was easy to like, despite its flaws. A little bit heavier than I might have liked, but no less portable or mobile than any other thin 13-inch tablet or laptop.

It was a smooth performer, for the most part, and I could see the benefit for a student or casual user who wants a little bit of tablet usability, without losing any frills of a laptop. Heavy-duty users who have more distinct needs, like gaming or media creation, probably won’t be served as well.