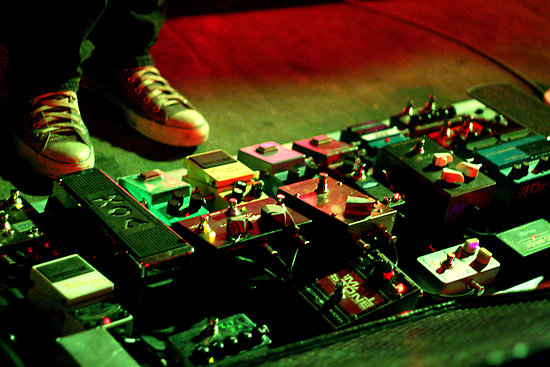 You’ve already got your guitar and an amplifier, maybe you took some lessons, and have spent numerous hours playing scales or strumming your favourite songs. You love it and can’t wait to pick up your guitar and do it all again. But something is missing. Even when you play that awesome Metallica riff at higher volume, it doesn’t have that chunk or that grit that your heroes do. You’ve been woodshedding and when you rip out a tasty solo lick it doesn’t cut through or have the same sustain as when you listen to Slash play it. This is where a guitar effects pedal is going to help you imitate your favourite guitar gods or finally realise that killer sound in your head that has long felt like an impossible dream. But how do you do all of that? By understanding what a guitar effect pedal does and then employing it as part of your rig. 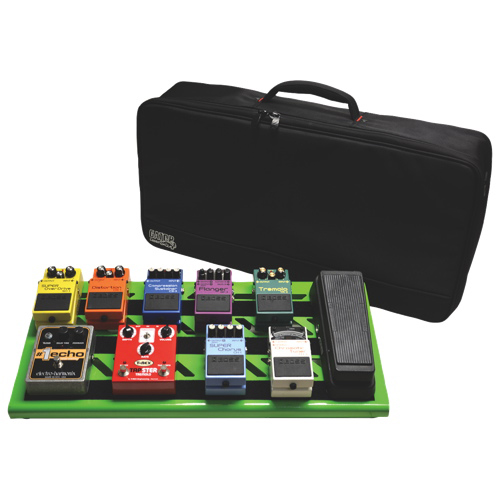 In the briefest and most concise way possible, the goal of a guitar pedal is to take the signal output from your guitar and in some way change it before outputting it to your amplifier and speaker. Sounds simple enough but can feel like anything but when you’re standing in your local Best Buy staring befuddled at countless colourful little boxes, larger boxes with countless switches and dials, and the those pedals that look more like the gas pedal add on that you use to play Forza on your X-Box. The first step to moving forward is having a general understanding of the purpose and rationale of the different types of pedals, what they will ultimately do for you, and how you can use or (or several) to finally achieve that killer tone that lives in your head.

If you listen to music, any style of music be it live or recorded, there is almost a complete certainty that there is some kind of effect on the guitar. Also called stompboxes, effects pedals fall into a few general categories which I will overview here but to find more a in-depth breakdown click this link to go to the first blog in a series that looks specifically at Pedals that Boost. The other rather general categories are Pedals that Modulate, Pedals that Echo/Delay, Pedals that Filter/Model, and your all inclusive Multi-Effects pedals. The first thing to keep in mind is that these do not function as some set in stone grid as many pedals on the market may indeed fall into more than one category but is a good primary way of thinking about guitar effects. 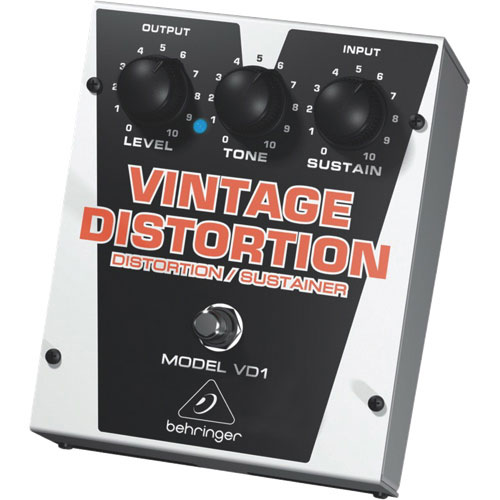 Pedals that Boost include signal boosters, overdrive, distortion, and fuzz pedals. These pedals take the sound signal from your guitar and boost it in some way. Many booster pedals simply add a few decibels to your signal to give it a “kick up” when you want to solo, for example and may or may not do much else to your tone. Overdrive, distortion, and fuzz pedals, however, are designed to not only boost but to dirty the signal in order to make it sound heavier and meatier as well as increasing your sustain.

Distortion pedals are a mainstay in heavy metal and punk and is versatile in that it can be adjusted to smoothly influence the signal or drive it over the top with distortion and grit. Know that no two distortion pedals are created alike as each offers their own little take on the genre and you really need to test drive these in order to find the one that suits your needs.

Overdrive pedals do the same thing to your sound but in a way that doesn’t seem quite as angry or hate filled. It simulates a warm sounding tube amp that is being pushed to the point that the tubes dirty the tone a bit. You will find this employed a lot in blues, country, and classic rock. When I hear overdrive I almost instantly imagine AC/DC.

A fuzz pedal conjures images of bell bottoms and long hair as it became a mainstay sound in a 60’s rock and psychedelia. Different than distortion or overdrive I can only say that it sounds grimier and thicker and as an effect is almost entirely related to a specific sound and era, even though it is commonly used today. The simple circuitry in a fuzz pedal takes your signal and “clips” it, which adds that warm and muddy sound. 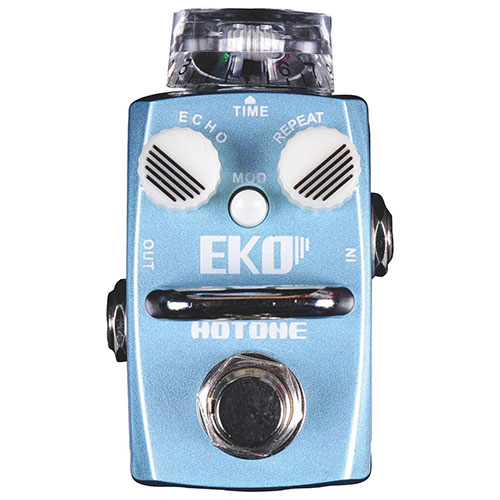 Echo and delay pedals multiply the signal and with the settings you have decided on and dialled in on the unit, replays the second version of the signal at a chosen interval after the original. You can set it to replay multiple times or just once, to slowly fade or to increase in volume, and can use it to thicken a signal or to substantially alter it. The opening riff in Guns ‘n Roses Welcome to the Jungle is a great example of a delay effect on a guitar signal. A reverb pedal is like a delay that slowly decays and results in producing a signal that sounds like it is being played in a large room or hall. Looper pedals fall in this category as well but offer more flexibility in what and how you use a signal. It can essentially record a passage and play it back for as long as you would like. A fun practise tool, you can record a riff and loop it over and over while you layer a solo over it.

Pedals that modulate include chorus, flange, phase, vibrato and tremolo pedals and can seem to function like echo/delay pedals but differ in that rather than taking your entire signal and replicating it, it can pick and choose which parts of the signal it will play with while leaving the rest of the signal alone. A chorus pedal takes the signal and play it back with the original in such a way that rather than being a true delay or echo, is really just a subtle thickening agent that can give you a lush orchestral feel. A flange also splits the signal and replays one on a very brief delay but then the signal repeat time changes. It also thicken the signal, albeit more dramatically than a chorus, and in the case of Van Halen’s Unchained riff adds an almost jet engine like woosh into the mix. A phase pedal is similar to a flange and resides somewhere in between the subtle chorus and dramatic flange. It also replicates your signal, shifts the phase on one and then recombines them. It is also a mainstay of early Van Halen recordings. A vibrato emulates the way one would raise and lower pitch by repeatedly twisting their fret hand while fingering a note. Tremolo gives a spacey feeling to the signal through volume swells and is familiar to most from rockabilly or surf music. 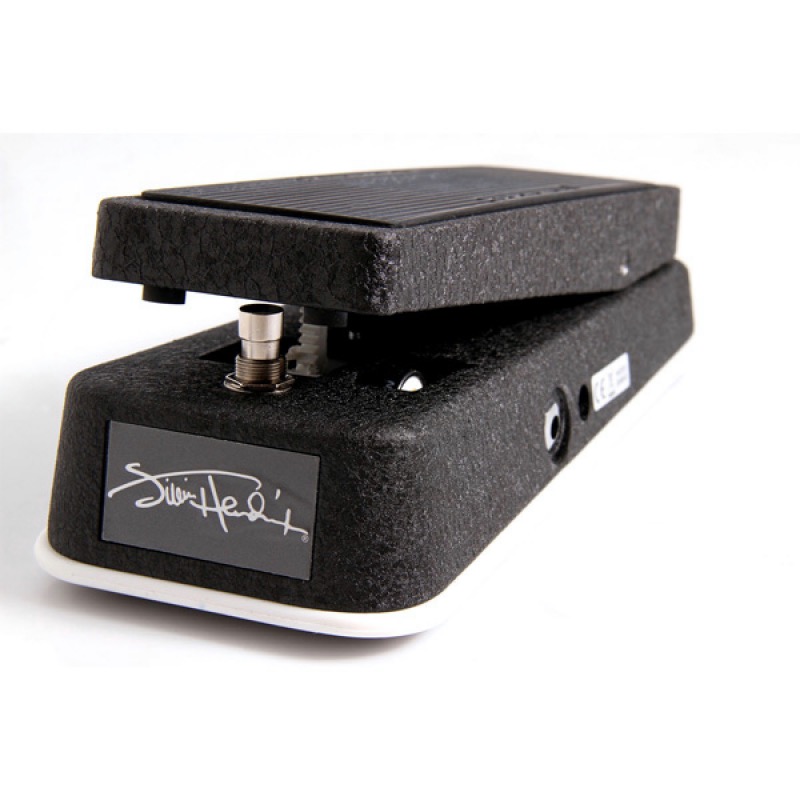 The wah-wah (or simply wah pedal) is synonymous with players like Jimi Hendrix and Kirk Hammett, the wah is the effect pedal that looks like the gas pedal for your gaming system. It takes the input signal and as your foot depresses and compresses the pedal filters the output sound by sweeping it through the frequency spectrum creating the wah effect. The auto-wah is a more traditional stompbox without the foot treadle and while it works the same it uses the pick attack and the signal intensity that produces to filter through the spectrum rather than the foot controller.

Graphic equalizers are not effects per-se, meaning they don’t fundamentally take a signal and alter it, rather they allow the user to fine tune different frequency bands. This allows you to tweak your sound by adding more brilliance, removing some of the mid range, or upping the bass. A compressor pedal also has a boosting function but it basically takes your signal and levels it out by taking some of the teeth out of the front of a note and adding some to the back. This normalizes your overall signal by squishing peaks and upping valleys of the waveform to create an articulation in each part of the signal so that nothing overpowers or cannibalizes another part of the audio. It can also add sustain and add a more dynamic feel to your sound. 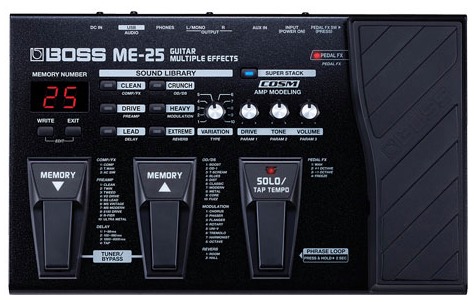 The multi-effects processor is just that, a single unit that while larger than a stompbox allows you to access a multitude of different effects in a seemingly endless variety settings and configurations. There are other pedals as well as this is by no means a comprehensive list but it does consider the more used and useful pedals that you will want to consider adding to your stable. Again, there is crossover between the different categories as you may have already noticed but you should have enough of an overview now to head in to your Best Buy location and start trying them out looking for that inimitable tome that will ultimate define you as a guitarist.