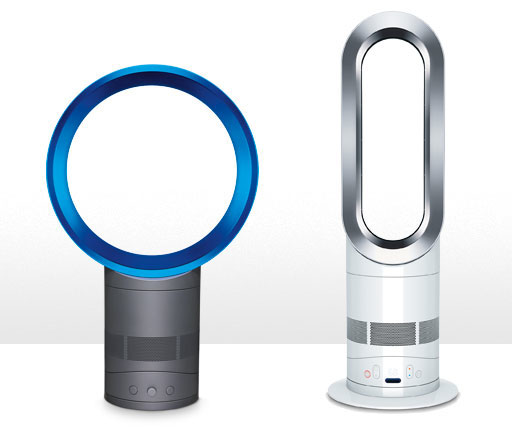 What do you think of when you hear the name Dyson? For most people, Dyson the brand name brings to mind vacuum cleaners with enough suction power to blast through endless piles of dust, debris, and pet hair. But if you only have a Dyson vacuum, you’re really missing out.

Dyson fans are sleek, compact, and powerful enough to keep you cool, even if you’re sitting way across the room. Available in two models – the Dyson 12” Desk Fan and the Dyson Tower Fan, they’re controllable via remote and will fit seamlessly into your décor no matter if you put it on your desk or in a corner of your busy living room.

The Dyson Tower Fan is 100 cm tall and the compact design fits perfectly into tight corners. It has some of the same features as the desk fan including: 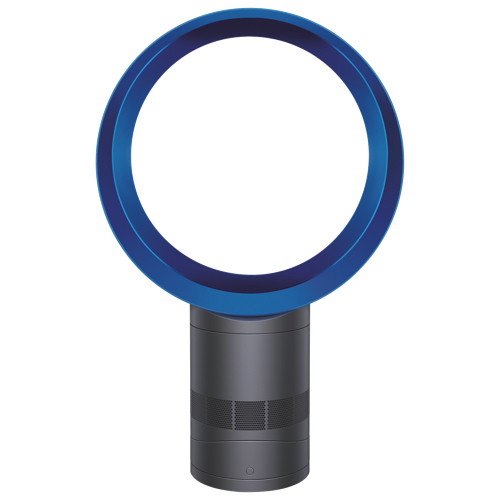 Even though Dyson fans look high tech, they’re seriously easy to assemble. They come in sections including the base and fan. To use just click the base to the fan and plug it in.

I don’t know about your desk, by mine is littered with papers, computers, iPads, and the odd pencil, so I don’t have a lot of room left for anything else let alone adding a much needed fan during the summer months. But that’s where the Dyson 12” Desk Fan is different from all the others I’ve tried.

It has a unique round design that, unlike other bulky fans with blades, doesn’t take up a lot of real estate. I’d go as far as saying one of my favourite features of the Dyson Desk fan is how it’s circular and open so you don’t have to block your view or someone’s face if they are beside you.

Although the Dyson Tower Fan doesn’t sit on your desk, it takes up less space too. I can easily fit it into a kitty corner of my living room and control it from the couch. It’s also the perfect size, shape, and weight for bedrooms, rec rooms, and even to take out on the deck on a warm summer night.

Here’s a quick Vine video to show you how compact the Dyson Desk Fan is.

If you’ve ever thought having a weak, old fan that makes a lot of noise when it’s working and barely pushes the air around is better than no fan at all, you’d be wrong. All you need to do is try out a Dyson fan and you’ll wonder why you waited to upgrade. They push air through what Dyson calls an ‘annular aperture,’ drawing the air in and projecting it out in smooth, comfortable breeze. Even when you turn it up it doesn’t feel like its blasting huge, intermittent gusts at you. I sat half way across the room and I felt a noticeable, cool breeze.

The Dyson fans are also extremely quiet. I’ve had both running at the same time and they are barely audible, but if you want to turn them up for white noise they sound perfect at high speed. 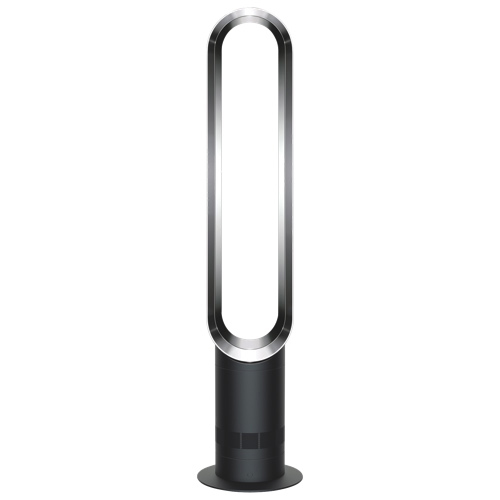 Control from anywhere in the room

The Dyson 12” Desk Fan and the Dyson Tower Fan have 10 precise airflow settings so you can control the amount of air you send your way. You can use the remote control to adjust the airflow or begin oscillating. There’s also a touch tilt feature that lets you adjust the fan angle and a sleep timer. The sleep timer will let you shut the fan off at pre-set intervals, so if you want it to shut off anywhere from 15 minutes or an hour after you fall asleep, you can do that via the remote. The remote also comes in handy if you’re hot in the middle of the night but you don’t want to get up and adjust your fan speed.

Speaking of the remote, the Dyson fan remote is curved and magnetized so it stores right on the fan. No more losing remotes!

The perfect fans for families

While I was putting the Dyson Desk Fan and the Dyson Tower Fan though their paces I noticed one interesting thing – if my son went near the fan and tried to touch it, I didn’t feel that surge of panic that happens when he goes near other fans. If you’re a parent you know the ‘OMG he’s going to chop off his fingers!’ feeling you get when kids try to stick their fingers into bladed fans, and trust me, for some reason only known to children they will almost ALWAYS try to stick their fingers into the fan.

Because of the unique shape of the Dyson fans, that feeling of panic is completely absent from my day. The inner portion of the fan stays cool, so you won’t have to worry about any sort of burn, and there are no blades to hurt fingers. It’s also easy to clean – just wipe those tiny, curious fingerprints away with a damp cloth.

Stay cool, save on your energy bill

Dyson fans do the job of keeping you cool so well they are the perfect way to maximize the cool from your air conditioner unit when it gets really hot. Or, you can use Dyson fans as an alternative cooling source when it’s not so steamy out. I have a portable air conditioner I keep in the hottest rooms of the house, and by putting a Dyson Tower Fan in the hallway I was able to amplify the cool to the other rooms.

Summer is coming – it’s time to ditch those sweaters, bring out the shorts, and plan for those steamy summer nights. To stay cool in your office, at home, or even on your outside patio, you can’t go wrong with a Dyson fan. Check out the Dyson 12” Desk Fan and the Dyson Tower Fan on Bestbuy.ca .