I write for a living, so keyboards are a big thing for me. I have probably a dozen of them kicking around my office, including chiclet-style, Bluetooth wireless keyboards, extended keyboards and portable keyboards (if you’re interested, you can see some of that collection in this post). The one that I use for 90 percent of my work is a big, somewhat clunky looking, loud, mechanical keyboard. It’s literally twice the size of the Apple Wireless Keyboard that shipped standard with Mac computers for years, and at 1.36kg it weighs six times as much. But I wouldn’t give up that mechanical keyboard for anything.

I’m not a professionally trained typist, but over the years I’ve developed a system that works pretty well. Ugly, but effective. My mechanical keyboard uses Cherry MX Blue mechanical key switches and the results are an unmistakable “clack” whenever a key input registers. There is also tactile feedback in addition to the audio cue that a key has been hit; you can feel when that mechanical switch engages. The results are faster and more accurate typing.

And to tell the truth, when I get going on a tear it sounds like an old-fashioned newsroom in here and that adds to the “wordsmith-y” ambiance and feeling of productivity. It’s kind of like that trend now where auto makers are adding speakers to their cars that spit out rumbling, revving engine sounds. Only the mechanical keyboard doesn’t just sound like it means business, all that noise is fulfilling a functional purpose. If the noise is too much for daily use (for example, if you pull out a mechanical keyboard with Cherry MX Blue switches in a shared workspace, your cubicle mates may soon begin plotting your untimely demise), there are options. For example, a keyboard with Cherry MX Brown switches offer some tactile feedback while significantly toning down the noise.

In the evening, if I’m working and worried about the high volume clacking possibly annoying my family or keeping people awake, I simply switch to a more traditional Bluetooth chiclet-style keyboard to work in relative silence. Transitioning between mechanical and membrane-style keyboards is not a problem, by the way. There is a little more effort required than with traditional keyboards, but you get used to it after a few days. After that, it’s not like once you get accustomed to the mechanical keyboard you become useless on a laptop; I seamlessly switch back and forth multiple times during the day as I move through the house and yard, and between devices. The usual keyboards feel a little mushy and it’s definitely easier to accidentally brush a key, but the basic layout and spacing is the same. But when it’s time to sit down and power through an afternoon with few thousand words? The mechanical keyboard is my undisputed favourite.

Other than noise and bulk, the primary downside I’ve found to a mechanical keyboard is cleaning. Dirt and dust gets down in between and beneath the keys, making cleaning more of a chore than with a chiclet-style keyboard.

If you’re considering a mechanical keyboard—for gaming, or for productivity—Best Buy has plenty of options to choose from. Here are a few of the most popular models. 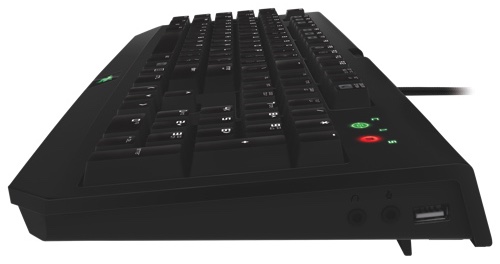 Windows and Mac compatible, the Razer BlackWidow Expert is a good choice for someone who’s on the fence about mechanical keyboards. When it comes to video games, it’s a little more basic than some models, but it still offers what’s important for gaming and productivity: mechanical switches. It also supports macro programming, has backlighting, a full-sized layout with number keypad and multimedia buttons. Just as importantly, it’s affordably priced so the move to a mechanical keyboard doesn’t need to be an expensive one.

The Razer BlackWidow Chroma keyboard is a step up from the BlackWidow Expert, offering some snazzy extras like the Chroma lighting effects that give it its name. Chroma means not only individually LED-backlit keys, but the ability to individually program those keys with 16.8 million color options. You also get high quality, long-life mechanical switches, five dedicated macro keys that can record a macro on-the-fly (always a plus for gamers but also has potential for productivity gains); with unlimited memory profiles, you could set the macro keys and Chroma lighting in one configuration for your favourite game, and in another for daily use. There’s not only a USB port for easy access with thumb drives and peripherals, but also audio jacks. So no more reaching around behind the PC to plug in your headphones. Like the Expert, it’s both Windows and Mac compatible and includes dedicated multimedia controls, so you can easily tweak sound and media playback.

I’ve always like Logitech keyboards and the Logitech G810 Orion Spectrum looks like it would be a beauty for my purposes. And a pretty capable gaming keyboard as well. Although large–as almost all mechanical keyboards are—there’s very little in the way of wasted space around the perimeter of the device. In other words, it’s pretty compact so far as these things go.

Logitech says its exclusive Romer-G mechanical switches have 25 percent faster actuation than standard Cherry MX switches, so responsiveness should be spectacular. They’re also rated for extra long life at 70 million keystrokes. Of course there’s a full numeric keypad for faster entry of numbers and there are 16.8 million colours available for individually backlighting the keys. Custom macros are supported and there are separate media controls. Nice touches include a braided cable (premium look with less tangling), special fingerprint-resistant matte texture keys and rubber feet with three step angle adjustments for comfortable and stable typing.

The only regret I have about my current mechanical keyboard is that it lacks backlighting. I don’t even mind the USB cable (it adds two more easily accessible USB ports) but the next time I’ll pick one like the Logitech G810, Razer BlackWidow Ultimate or Razer BlackWidow Chroma that offers customized key lighting. That makes the keyboard far more useful in low light situations, and I have to think the splashy colours some of these things will only help me type faster. At least that will be my excuse when it comes time to justify buying one …