TP-Link is back with a whole new, whole home Deco XE75 mesh Wi-Fi system you can set up to blanket your home with faster and wider connectivity.

This is TP-Link’s first router offering Wi-Fi 6E. That’s significant because it opens the router up to the 6GHz band. I’ll get into that further into the review, but for routers up to Wi-Fi 6 (without the ‘E’), they worked on the 2.4GHz and 5GHz bands. They’ve become increasingly crowded because of the limited number of open channels devices can connect with. Adding the extra band increases capacity to a huge degree.

As a mesh network, the Deco XE75 presents an opportunity to transform how Wi-Fi works in your home. This is especially true if you’re using the router hardware your Internet Service Provider (ISP) provides you. It’s all but certain you would see a big improvement from that if you were to deploy this mesh instead.

Mesh Wi-Fi at your service

The Deco XE75 come in packs of two or three. My review unit was a two-pack, basically two identical routers that, when set up and connected, form a mesh Wi-Fi network. They not only spread the signal further, they also better retain throughput. Rather than a single router trying to cover a whole home, the two units in this case share that role.

They do that because the two units are identical routers. You connect one to the modem, the device your ISP gave you to bring in the Internet connection, and you then set up the second one in another part of the home.

That might seem a bit daunting at first, but the setup actually isn’t hard. You just need to download the TP-Link Deco app to your phone or tablet. Also, if you are using the modem/router box your ISP gave you for your home Wi-Fi, it’s best to turn off the router function. If you know how to administer your router through a web browser, you can do it yourself manually. If not, call your ISP and ask them to remotely shut off only the router portion of the device, as you do want to keep the modem portion active. It shouldn’t be a problem to get that done.

Each of the units in this pack have three Ethernet ports in the rear, plus the plug for the power adapter. Follow the instructions in the app, and you’ll know when to restart the modem, as well as the right time to connect it to the first Deco unit. The Ethernet ports are no different from each other, so it doesn’t matter which one you use to connect to the modem. I always advise that when you’re setting up a new router, use the same SSID (network name) and password as the previous one. What that does is keep all your devices connected to the network, despite changing routers. Super convenient because you don’t need to connect them all to your Wi-Fi network all over again.

Another key point: the Deco XE75 does support multiple bands, but you only see one SSID. If you had devices that were previously connected, say, to the 5GHz network only, they may not transfer over the same way. You might need to reconnect those to your new network.

Once you get the first unit ready, and the network going, setting up the second unit is easy. The app will show you when everything is good to go. I recommend doing speed tests both before and after the AXE75 setup to gauge what kind of difference you will see. In parts of your home that struggled to connect, I would expect a dramatic difference, assuming one of the units is within good range of the device(s) you’re using.

The app is basically your portal into the whole network. Here, you can not only test speed, but also administer various things. Parental controls for both illicit content, or to block kids’ devices for certain times. Port forwarding, if you need it, along with monthly reports to see your network’s health and performance.

Under a different section, you’ll come across QoS (Quality of Service), which lets you prioritize how you want network traffic to allocate. If you tend to stream a lot, or have multiple devices doing it, you can select that as the top priority. Same if gaming or web surfing are your main purposes.

Where Wi-Fi 6E comes in

The global Wi-Fi Alliance decides on Wi-Fi standards, and this move to 6E does make a difference. Wi-Fi networks can become congested, not just because of all the devices connecting to them, but also the channels they’re on. See, Wi-Fi networks, particularly those on the 2.4GHz and 5GHz bands, operate on limited channels, which means that any Wi-Fi device connected to a network on a certain channel will compete for bandwidth with others doing the same thing.

That wouldn’t just be with whomever you live with, but also with neighbours as well. When the Alliance approved the 6GHz band, it was the biggest move in over 30 years for Wi-Fi technology. The reason why is because it multiplies the number of open channels by four times, leading to far less signal interference.

Only Wi-Fi 6E routers have access to the 6GHz band and extra channels. One major catch though—the device you’re using also must support Wi-Fi 6E to take advantage of the clearer connection. Otherwise, said device will default to either the 2.4GHz or 5GHz bands.

I had a couple of phones I ran some tests with, and it was smooth sailing all the way, even if both were using bandwidth at the same time. Granted, it does matter what kind of connection you’re getting from your ISP to begin with. I know that rural areas do struggle with this far more than urban ones do, so your mileage may vary. Performance of the TP-Link Deco XE75

I primarily tested the Deco XE75 at a friend’s home, as she had been struggling to get both good range and throughput. The video above tells a lot of that story, but the gist is that in a bedroom a mere 50 feet away, the previous ISP modem/router couldn’t even establish a connection that far away. With the Deco’s second unit placed inside, it shot all the way up to over 400Mbps. It literally was like night and day. She even said it felt like getting a new Internet connection set up.

Unlike some previous TP-Link Deco mesh systems, this one does have a backhaul band, meaning there is a dedicated connection behind the scenes linking the units together to sustain the quality of the signal. That’s great for connected devices to maintain a solid hold on Wi-Fi.

The improvements all around did include some great results with range, as the these two units covered a 1,200 sq. ft. condo with relative ease. Not that there weren’t some hiccups, though. An older 2014 Toshiba laptop struggled to get a really good connection. The odd drop-off was one thing, but throughput maxed out at 9Mbps only 20 feet away from the main unit. While the Wi-Fi chip inside the laptop is older and can’t handle speeds faster than Wireless-N, it also had trouble reaching anywhere close to a very possible 35-70Mbps.

Moving the laptop closer did help, but only just. When I tried my newer 2021 MacBook Pro on the same network (albeit without Wi-Fi 6E support), it blazed through, clocking at close to 500Mbps.

There were obvious improvements in streaming and browsing on all devices. Dropouts and buffering all but disappeared. Competing for bandwidth was less of an issue. In summary, it was pretty smooth sailing using this mesh system. It’s a very good idea to make use of the Ethernet ports in the rear. If you have a device within reach of either unit to plug in, do it. It not only affirms an even faster connection with no latency, it also takes a Wi-Fi device off the board in your network. Devices connected via Ethernet wouldn’t count as Wi-Fi devices in a network with the Deco XE75.

TP-Link does include a set of built-in antivirus tools you can utilize that are off by default. Turn them on, and they can help you look out for shady websites, malware, or cyberattacks. These are largely surface defences, and the suite is limited in scope, but you can customize it a little. Filter out websites you don’t want anyone in the house to see, for instance.

The TP-Link Deco XE75 would be a huge upgrade from a single router you get from an ISP. Not just in range, but also in throughput, and that matters because you get more of the bandwidth you’re actually paying for. With an easy setup, plus accessible features and administrative tools on your phone or tablet, you also learn how to manage a Wi-Fi network.

If you already have a mesh Wi-Fi network, the selling point here might be the Wi-Fi 6E compatibility. Routers will have that as standard soon enough, so there’s no exclusivity here, but you can jump in if that’s what you’re looking for.

The TP-Link Deco XE75 is available now as a two-pack or three-pack mesh system. 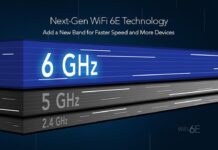