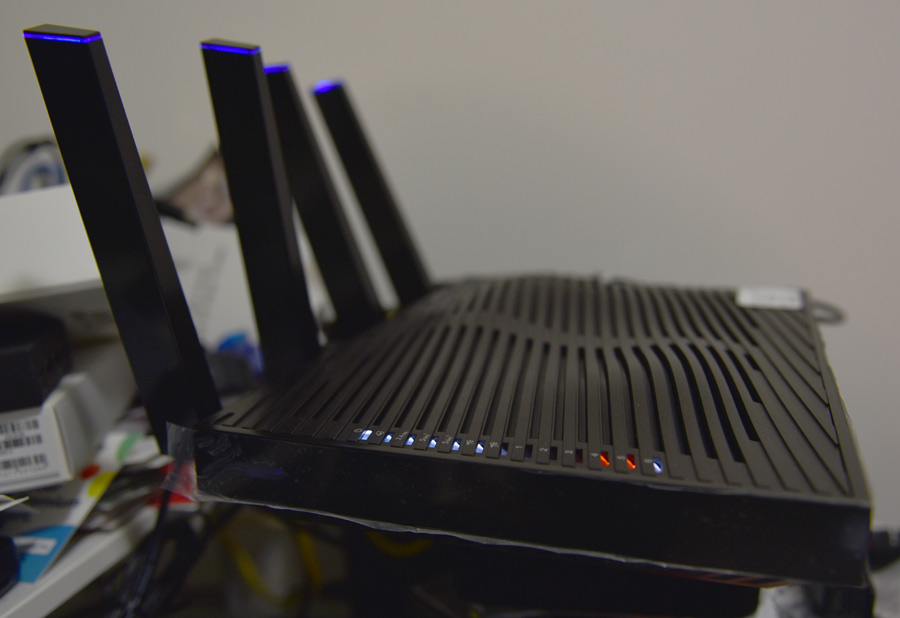 Comparing a router to a muscle car probably wouldn’t seem like an apt analogy, but in the Nighthawk X8, Netgear has built a unit that is designed to roar with power. Outfitted with a variety of features and unique hardware connections, this is a router aimed at users who know their home networking situation and want to raise it to another level.

On paper, the Nighthawk X8 stands out with numbers competitors currently don’t have. AC5300 is basically adding up the total bandwidth across the three bands the router outputs. Hence, it’s a tri-band router, and is technically capable of speeds that most devices today simply can’t reach. At least not yet.

A moniker like “Nighthawk” is appropriate for this unit, and it continues the design philosophy of the line, looking like it has muscle (it even bulges at the top) and horsepower under its hood. Packing in everything that’s been added has made the unit longer and wider than preceding models, and since it isn’t wall-mountable on its own, it will take up a noticeable footprint on a shelf or table. It’s also pretty heavy for a router, weighing in at 3.7 pounds.

The four active antennas that screw in on the back are relatively tall, yet felt shorter than others I’ve seen in the past from Netgear. In any case, the extra real estate accommodates all the ports and connections in the back and side. There are six Gigabit Ethernet LAN ports (not counting the yellow one for the cable that comes from your modem), which is two more than the standard four most routers have these days.

The extra two are labeled as “Aggregate”, which means they can be used in tandem as port aggregators for a larger throughput to a compatible device — one which has two Ethernet ports of its own. More on that in a bit.

The other four Gigabit LAN ports are there for connecting wired devices, which can include a computer, but is more handy these days, at least for me, for smart home and other connected gizmos, like hubs for Sonos, Ooma and Philips Hue, for example. The two USB ports, one 3.0 and one 2.0, are on the side, which may seem like a design issue, but I found it to be convenient in that I avoided having to plug and unplug hard drives amidst a sea of cables in the back.

The reason for two USB ports is that the 3.0 (in blue) can be used for external hard drives, while 2.0 is great for networking a printer to work from any computer or mobile device in the home. Technically, both ports could be used with external hard drives, except the 3.0 will have faster transfer and streaming speed.

While Wi-Fi is getting better and faster, wired connections are still king when it comes to speed and consistency, and that makes the extra LAN ports attractive to heavy users who have a lot of hardware at home. Gamers on desktops or laptops also come to mind. 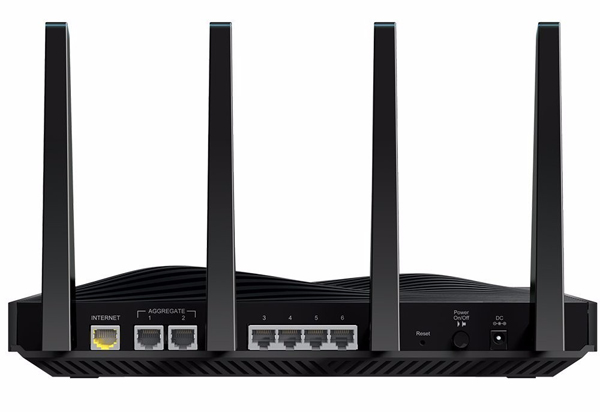 The Nighthawk X8 has a handy quick start guide to walk through the setup process. It’s definitely not plug and play, as it does require accessing the Netgear Genie interface on a web browser to ensure there is an Internet connection and make necessary adjustments, like changing the network names and passwords to the three bands. There is the option for a fourth as a guest network, turned off by default, but you can set it up with a different name and password, ensuring guests have no access to the network infrastructure.

The port aggregation noted earlier is a nifty feature to include, as it is the first consumer router to offer it, but support for it is quite limited, where it has traditionally been focused on enterprise and business use cases. If you have a network attached storage (NAS) that has two Ethernet ports in the back, then you need only plug two cables into them and the other ends into the aggregator ports on the back of the Nighthawk X8.

The benefit in having this sort of setup is simply throughput. Moving around huge files or streaming media is much faster and smoother. However, high-end NAS devices generally have that extra port and support for port aggregation out of the box. More products could make use of it moving forward, but for now, it’s a really cool, albeit niche, feature.

One thing I noted in the setup that may be important to Mac users is the lack of native Time Machine support. Basically, plugging in a hard drive to the USB port to act as an automatic Time Machine backup won’t work. This is a notable shortcoming for a router that, frankly, should have that feature ready to go.

It’s important to get a few things out of the way here in order to clarify where the Nighthawk currently stands. Being a tri-band router means it has three bands — one on the 2.4GHz band, and two that share the 5.0GHz one. As noted in a previous review of the Nighthawk X6, this doesn’t translate into three distinct networks, only that splitting the higher band is helpful when many devices are connected to it.

If your home is made up of one computer, one mobile device and maybe a game console, this isn’t the router for you. Less is more doesn’t apply here. The reason for all that horsepower under the hood is to manage several devices at once, all of which thirst for bandwidth.

This is where some of the future-proofing comes in. The Nighthawk X8 is designed to support MU-MIMO (multi-user multi-input, multi-output), a new wireless protocol that boils down to allocating and prioritizing bandwidth equally and simultaneously. In case you weren’t aware, routers have always had to queue devices to get the bandwidth they need. It happens so quickly that it’s not always noticeable, but if you live in a home with a lot of devices connected at once, you may understand the hiccups and slowdowns I’m referring to.

MU-MIMO isn’t ready to go on this router yet, but Netgear will unlock it with a firmware update. For the moment, device support for the new protocol is slim to none, though that will start to change in a big way in the second half of this year.

That being said, the router performs very well, with impressively solid consistency in speed and range, yet I can’t say that it was tremendously better than other routers I’ve tested in the same price or lower. That’s partly because the Nighthawk X8’s chops are focused more on the features and technologies that haven’t gone mainstream yet. For users who want a heavy-duty router, some patience will be required. 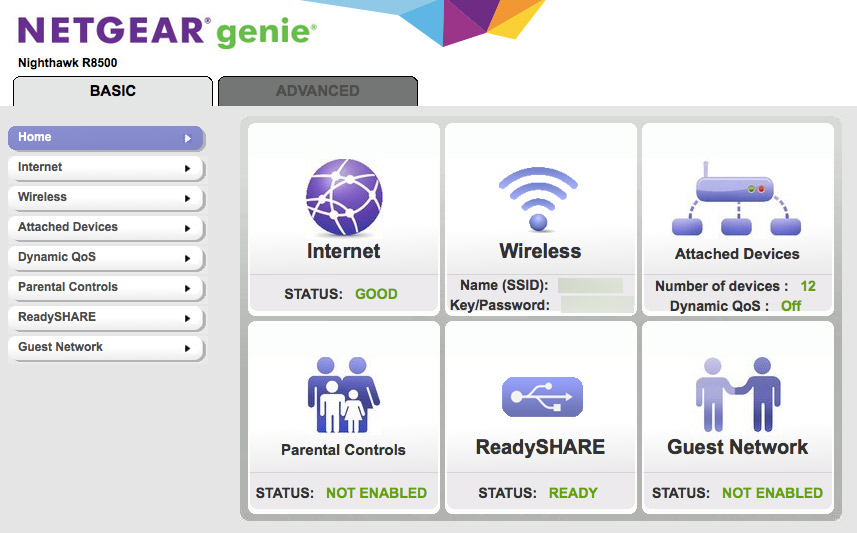 Admittedly, I’m not a big fan of Genie. The necessary tools are there, but the look and feel of the platform leaves me feeling like something doesn’t look right. There is a desktop version (for Windows PC and Mac) of the software but you don’t have to download it. The web interface is perfectly fine, offering all the basic and advanced features you would want to manage the network settings.

There is also a free Genie app for iOS and Android, which is worth downloading if you plan to manage the router from home or away. Parental Controls are a good example, with options to curtail access at certain times of the day to specific devices the kids use. Netgear does need to clean the app a little though. Prone to slowing down, and not offering all the access I would expect in administering the network, it left me feeling annoyed a few times.

The Nighthawk X8 isn’t made for the average consumer who doesn’t have that many active devices. Families with several active devices should see a performance boost with it, mainly because of the tri-band system and the active antennas that help distribute the Internet connection more evenly. Your needs have to be pretty substantial at home to warrant going with a heavy-duty router like this. Otherwise, you’re better off going with something else.