Our homes are filled with devices that depend on the internet, so you need a decent router. Your fridge may want to text you. Your thermostat needs to connect to the cloud to download updates. Who knows, your toaster may need to post to Reddit. Ok, the last one may be fake. The point is that as our homes get smarter, the reliability and speed of your router become more and more important. The constant chatter of devices can crowd your Wi-Fi network, and that can impact the functioning of many critical activities in your home (including your gaming performance!). I was just sent the ASUS ROG Rapture GT-AX11000 Router to test and determine if it delivers on improving your home network.

Antennas. So many antennas. Eight of them, in fact. I suppose you could attach fewer than the maximum number of antennas, but why? Also, at full antenna complement, your router can cosplay as a robo-spider.

(This is not an actual supported method of displaying your router and you should not do it. Don’t follow my bad example, kids).

The rest of the boxed items are as expected: a power supply, an ethernet cable, a quick installation guide, and a help sheet for updating the wireless drivers of your various devices. To be honest, the help sheet instilled a foreboding sense of incompatibility.

Set up and configuration

I tend to put off network changes until everyone is out of the house and I can swear and cry with impunity. To my surprise, the set up for the ASUS ROG Rapture GT-AX11000 Router was ridiculously painless. It was up and running in the place of my usual router within seconds, thanks to the easy configuration wizard. And even more surprising, I had no connectivity issues. Even the embarrassingly old devices in my house had no problem connecting to the newly installed Wi-Fi.

The admin page is a welcome change of pace from the less than forthcoming one that my usual router has. The graphical display of your network map is a small but nice touch. The overall design goal seems to be to give you the user as much information as you could need, presented in a visually appealing way.

The ASUS ROG Rapture GT-AX11000 Router has an easy 3-step process for setting up port forwarding, as long as the game you’re playing is in their pre-set list. The default list is a bit out of date, but software updates will fix that.

I was glad to see that the pre-sets include settings for PS4 and Xbox One games as well.

You expect your router to have some basic security features, but the ASUS ROG Rapture exceeds your modest expectations. If it detects that a new device is trying to connect to a malicious website, it will block the connection and isolate the infected device from the rest of your network.

And the inclusion of parental controls is a very nice surprise. You can group devices and associate them with a user profile, so switching from iPad to phone won’t give young Johnny any additional screen time.

Above and beyond the raw speed offered by the router, the ASUS ROG Rapture is designed to manage a device-rich environment. Here’s the thing you probably haven’t thought about: your home network is cluttered. You might be living the life of a Wi-Fi ascetic, using one solitary device to connect to your network and the internet.

But in the age of the Internet of Things, your house is full of internet-connected devices all asking for their share of the Wi-Fi bandwidth. Each device may only be asking for a tiny slice of the pie, but the traffic adds up. The ASUS ROG Rapture is designed to manage communications from a multitude of devices while allowing you to prioritize your gaming traffic. And the ASUS ROG Rapture makes it astoundingly easy to set up a guest network (or three) when the situation dictates it.

A network of networks

Another feature of the ASUS Rapture Router is AiMesh. The standard mesh network uses a number of matching network hubs to provide better Wi-Fi coverage to your home. If your home has Wi-Fi deadspots and pockets of surprisingly weak signal, a mesh network can help fix your wireless situation. The drawback is that you need to purchase the set of hubs and your existing network devices can’t be a part of the mesh. The AiMesh improves on the standard by allowing any ASUS router to join a mesh network. The AiMesh also allows you to set up multiple SSIDs, instead of lumping all your devices into one crowded network.

Personally, the 2.5 GB ethernet port is the feature I’m excited about. I don’t trust wireless networks to perform at top speed without hiccups. The world is a noisy place, from a wireless signal perspective. But no amount of wireless noise will impede on a good old-fashioned wired connection. If I want a completely stable and reliable high-speed connection between my main gaming setup and the internet, this is the port I dream of.

Shared storage and so much more

I don’t take advantage of router storage as much as I should. The ASUS ROG Rapture GT-AX11000 Router has 2 USB 3.0 ports, so you can pop a pair of USB drives in and have a low-cost network storage solution. But that is just one us for the USB ports. The Rapture also supports printer sharing via USB, media server functionality, and direct downloading.

A touch of colour

Like all the ASUS ROG devices, the ASUS ROG Rapture GT-AX11000 Router has a customizable light display that can work in synchronization with your other ROG pieces. The Rapture’s lights are constrained to the logo on the top and the boost button on the side, so don’t expect a dazzling light-show from your router. That’s for the best, since a router covered in bright, wildly fluctuating lights would be a bit distracting.

Waiting for the future

The one drawback to adopting cutting edge technology is the waiting. The potential high-speed wireless networks using the 802.11ax Wi-Fi standard is only hypothetical if the rest of your devices can’t use 802.11ax. The router works great, especially the WiFi, but you won’t see the top speeds until your devices are 802.11ax compliant. It will take a number of months before 802.11ax is fully adopted, so you’ll need a bit of patience.

The ASUS ROG Rapture GT-AX11000 Router is a router ready for heavy use in a multi-device household. The admin page gives you a clear understanding of what your router is doing, and easy control over it. You may not be able to get the full benefits of the increased speed and power until your devices are 802.11ax compliant, but the advantages are still worth the investment now. And if you already own an ASUS router, the ability to make a mesh network makes it an easy purchasing decision. 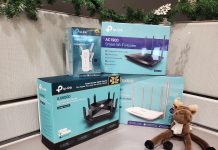 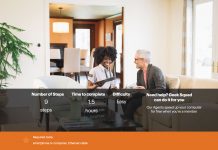 How to set up a wireless router 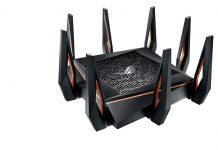