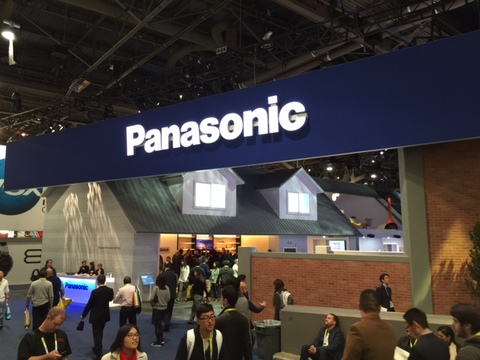 It seems like the best way to show what a smart home looks like, is to build one in your booth at the Consumer Electronics Show. Panasonic was not only showing off its new smart home software, but for nearly every room of the home, it seems there was a flagship smart connected device for it. Some were prototypes, but others are on the market right now.

Smart Home: every room gets connected

The Panasonic Smart Home starts with the announcement of the new Ora home system. The system can control lighting both indoors and out, as well as music, heating and cooling, cameras, and smart appliances all in one system. What makes this system different? Panasonic President Julie Bauer says Ora “is a platform capable of integrating them all – regardless of their own operating system – into a smart living experience you can operate on a mobile device from anywhere in the world.”

The kitchen is the centre of the home, so it makes sense companies are now starting to put more effort into making the kitchen a smart, fun, and connected place to be. Panasonic has lined up a whole bunch of outstanding new devices in its conceptual smart home kitchen, starting with a smart cooktop that looks just like a sheet of glass.

Stove with built-in scale and a pot that stirs

The cooktop has induction technology and add-ons like a built-in scale so you can pour things directly into pots and pans and the appliance will tell you how much you’ve got. How will it do that? Everything in the kitchen is connected to the Personal Kitchen Screen, a tablet that works with everything; it can tell you via a camera what’s in your fridge. Then it uses that image to recommend recipes to minimize food waste. The personal assistant also connect to kitchen tools like a smart stirring pot. The pot has a built in blade that will turn on when you set it on the cooktop and stir for you and save you the labour; that will also keep sauces or soups from burning.

Speaking of food that won’t burn, a special oven uses digital recipes to automatically cook your food to the perfect temperature, and using the best possible conditions (dry heat, convection, roasting) so you’ll never have overcooked meat or burnt muffins.

Another cool gadget was a special cooking chamber that can use humidity to keep food at optimum temperature, or cure meats or fish, or bake pizza, and it’s all 100% computer controlled. 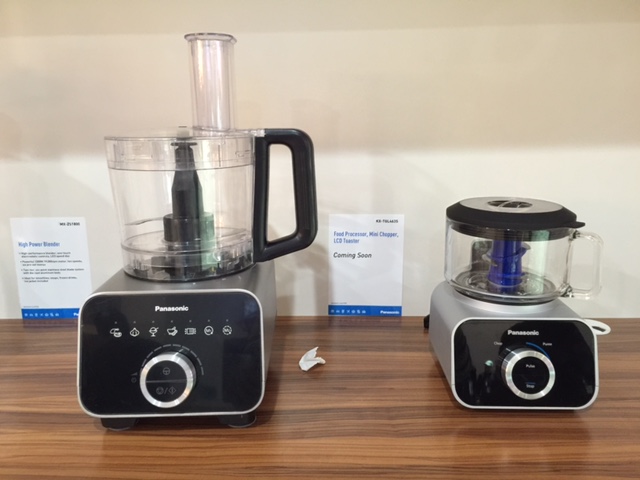 Panasonic also had several new small appliances which are out in the market now (or will be soon) including a high powered blender. Ever since the Vitamix came out and showed the world that average blenders might as well be stir sticks, high powered blenders have become poplar. Panasonic’s version has a powerful 1200 watt motor designed to chew smoothies to a smooth silky consistency.

Also in the line are a food processor and mini chopper (as well as a LDC toaster!) which are “coming soon” the company says. Each of the appliances has a rather boxy retro look, which I wasn’t a fan of. The bases on this line are much wider than the upper mixing/chopping/blending attachments, making them look like they’ll take up more space than necessary, in my opinion. But if they work amazingly well, maybe the aesthetics are a non-starter (hopefully we’ll be able to do some reviews this year). The MX-ZX1800 high power blender launched in autumn 2015 in the U.S. 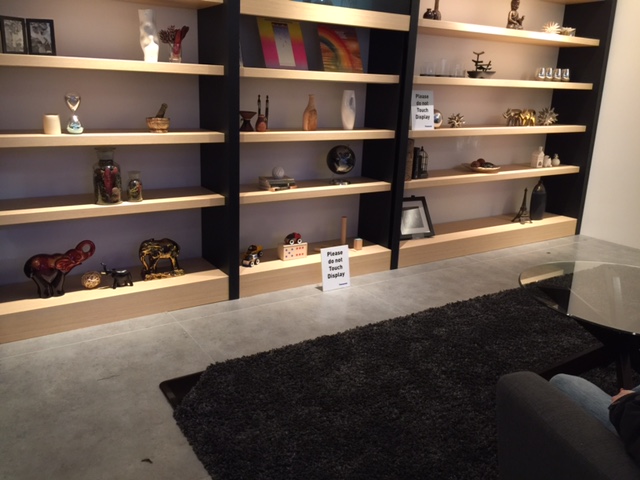 My favourite room in the smart house was the living room.  At first I was shocked; it looked so dull and ordinary! There were no speakers around the room, no massive TV, and really, no ‘gotcha’ features. Until our tour began. The lovely shag rug in the room had subtle flat corners that on closer inspection were actually plastic. A quick touch of a button and the rug came to life, playing music all around the room. How’s that for no wires, and no room-cluttering stereo components? While the rug is also a prototype, it’s a great idea.

Nearby a plate-sized triangular robot vacuum was scouring the floors. ‘Rulo’ as he’s called (and yes, the Panasonic folks definitely refer to him as a person) will clean floors automatically using tiny little fluttering sweeper brushes.  Of course he’s also smart enough to get around furniture, and avoid falling down stairs and his triangular shape means he can get into very tight corners with ease. Rulo is out in Japan, but it’s not clear when or if he’s planing to visit Canada.

The Big One: Panasonic Transparent Screen
This was easily one of the coolest things I saw at all of CES. (Disclaimer: I did not see EVERYTHING at CES. The show is the size of about 8 football fields, and it’s physically impossible to get to everything.) Panasonic was showing off what’s it’s calling a Transparent Display; essentially it’s an invisible hidden TV. When it’s tucked away, the display looked like an ordinary bookshelf.  Suddenly a clear glass panel slides down over the shelves, and with a click from a remote, it morphs into a high definition TV.  After a short video, the picture vanishes and the art or objects behind it become visible again. Then it sucks up into the bookshelf and vanishes completely. It’s a future world where no one would have to decorate around the TV again, and it’s a beautiful, beautiful world. While the model I was shown was a prototype, Panasonic’s rep told me the screen is about 2-5 years from actual production.

Panasonic also had TVs for today on display; sharp, vivid and ultra realistic Ultra HD/4K OLED and LED TVs. I think by the time I got to the Samsung booth I’d run out of superlatives for how awesome the new TVs coming out truly are, but they are really amazing. It’s like the line between reality and a screen is blurring to the point of becoming almost non-existent. You forget you’re in front of a TV and instead the high quality video transports you to other places. Panasonic’s premium 4K products including what the company says is “the world’s first 65-inch LCD television set supporting the Ultra UH Premium specs (TX-65DX900) are set to be released in 2016 in Europe”. North American dates weren’t provided.

I can’t wait for all the amazing technology to get to stores.  While some of it is conceptual, a lot of it is ready right now. So keep an eye out to see what’s on the way over the next year.

It was really fun covering CES 2016 for Best Buy. I had my eyes opened to a lot of brand new technology and also got to see advancements in a lot of gadgets and devices we already have. While CES is over now for 2016, don’t forget you can always find me on Twitter and Instagram @ErinLYYC . 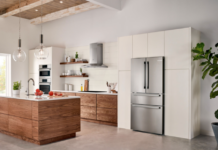 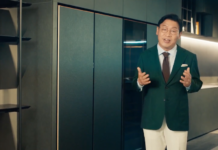