If your kids have access to a phone or tablet they use to play games or listen to audiobooks, you’ve probably already thought about adding a Bluetooth speaker to boost the volume. Having a portable wireless speaker like the Planet Buddies Pepper the Penguin speaker means you can stream audio without having to leave your phone nearby, and your kids can listen to books or play music at bedtime without needing a device.

The Planet Buddies Pepper the Penguin speaker is a cute little Bluetooth speaker and it pairs with your phone instantly. With four hours of battery life, you’ll have more than enough playtime between charges.

Planet Buddies Pepper the Penguin is very cute, but he has a bigger purpose too. He’s part of a Bluetooth speaker lineup that’s dedicated to raising awareness for endangered animals threatened with extinction. Planet Buddies has created two different Bluetooth speakers and a line of headphones to bring the focus to the endangerment of animals including the loss of habitats, harmful substances dumped in the ocean, and global warming.

Each Planet Buddies speaker has their own story. Pepper the Penguin’s story is that he lives in Antarctica, he depends on sea ice to nest, and climate change is affecting his home. The information shared in the speaker will give kids a few ideas to help save their habitat including choosing glass bottles instead of plastic or turning off the lights in the room when you leave.

Pepper the Penguin comes in sustainable packaging too, and the box he’s in is made from recycled eco kraft paper with soy-based inks. The box can be recycled again too.

Using Planet Buddies Pepper the Penguin couldn’t be easier, and once you set it up you’ll enjoy very clear sound and an instant connection every time you want to use him. Pepper comes with a cable for charging, so the first step you’ll do is plug him into an outlet.

I let him charge for 3 hours, and you get approximately 4 hours of charge. Just make sure to turn him off when you’re not using him or his battery will drain. If you don’t use him after a charge his battery will last up to 60 hours on standby.

There is a small on/off button on the back of Pepper. You push the button to turn him on and then you can go to the Bluetooth settings on your phone and Pepper will appear as a device to add. Once you tap Pepper’s name, you’ll be paired and your Penguin is ready to use. Pepper will connect to any Bluetooth 5.0 compatible device, and that includes both iOS and Android tablets, iPhones, iPad, mp3 players, or E-readers.

I started using Pepper by streaming a few songs on my Spotify playlist, and I was very surprised by how clear and vibrant his audio was. He only has a 3 Watt output, but the sound is pretty amazing for such a little guy.

Dialogue sounds crisp, and while you don’t get discernable bass, you can definitely hear high and low notes in music. It’s not tinny sounding either, and podcasts and ebooks are loud and clear as well. I didn’t experience distortion at all, but I didn’t turn him up to max volume either.

Volume on Pepper is controlled by whatever device you’ve connected him to, so you don’t have to worry about your child turning up the volume to max level. I didn’t manage to drain his battery during the time I was testing him, but I did use him for over 3 hours and he was still running. I like how he has a 60 hour standby time. If you don’t use him, you can just turn him off and leave him by your child’s bedside. He’ll be ready to stream ebooks or soothing music when you’re ready to use him.

With two Planet Buddies speakers, you can use your tiny friends as PC speakers or for gaming if you’re chatting with friends. I wasn’t able to test that out as I only had one Pepper the Penguin, but his audio quality rivals some of the larger inexpensive speakers I’ve used on our PC. Planet Buddies Pepper the Penguin Bluetooth speaker streams all of your audio, and with a 33-foot range, you can don’t have to leave your device in your child’s bedroom so they can stream from your smartphone.

You can also use Pepper the Penguin to take phone calls. If you are paired to him your phone will ring through to your Pepper, and the built-in microphone lets you talk hands-free. Calls are very clear and the microphone picks up even if the Penguin is turned around in the opposite direction. It’s pretty funny watching him ring when you’re getting a call.

Bring home your own Pepper the Penguin Bluetooth speaker

I paired Pepper with my computer as well as my phone, and I was very impressed with how he sounds and how quick and easy he is to use.

I know that Planet Buddies Pepper the Penguin is designed for kids, but his audio quality is so good I would consider using two as a pair of wireless speakers for my computer too. I love that he’s designed to bring awareness to the plight of endangered animals, and the designs for Pepper and his buddy Olive the Owl are just so cute. It’s hard not to love them.

The battery life is long enough to get you through a game session or two, and he’s easy to charge using his included cable. If you’re looking for a small speaker for your child’s room, I think kids will love him.

You can find your own Planet Buddies Pepper the Penguin speaker at Best Buy right now. 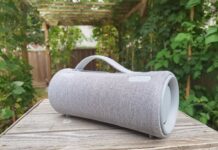