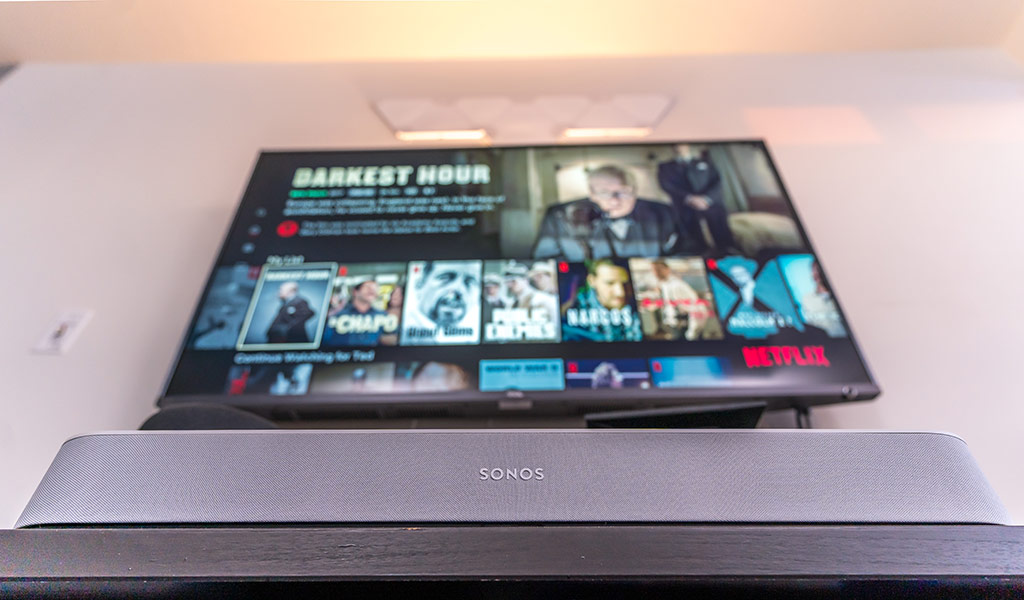 Sonos has been a popular option for streaming music throughout a home, but you can also combine some of its speakers for home theatre surround sound.

Even if you’re unsure about what surround sound is, you’ve probably already experienced it at some point. Movie theatres have it on a larger scale, and trying to replicate something similar at home requires the right setup. Sonos offers that as an option, provided that you link the right speakers together.

A 5.1-surround system can transform the audio output from your TV in pretty dramatic ways. That’s especially true if you’re upgrading from the TV’s own built-in speakers, which are often underpowered.

A Sonos 5.1-surround system requires at least three speakers to work. The primary one I would recommend is the Beam, which will act as the lead speaker directly hooked up to the TV. The Beam is a good size in that it will fit under most TVs, regardless of whether it’s on a stand or wall-mounted.

It will work with the Playbase and Playbar as well, although the setup is slightly different because there is no HDMI-ARC port in either of those devices. They do have a digital optical audio input, so your TV must have the same output to connect the two. The Beam, on the other hand, has an HDMI-ARC port. ARC stands for “audio return channel,” which is techno-speak for routing signals both up and down between the TV and speaker. I’ll get to that part a little later.

The rear speakers need to be an equal pair of models. It can be two Sonos Ones or One SLs, though you can use one of each to create the left and right rear channels. Two Sonos Play:1s can also work, if you want to go that route. If you want to go with two Sonos Play:5s, you can always do that too. You get the picture.

If you want to give the whole system a boost, add a Sonos Sub. The subwoofer takes over the heavy lifting of the bass, giving the audio a rumble that will shake the room. It’s not a must, especially if you live in a condo, but in a house, you might consider it as the last piece of this puzzle. 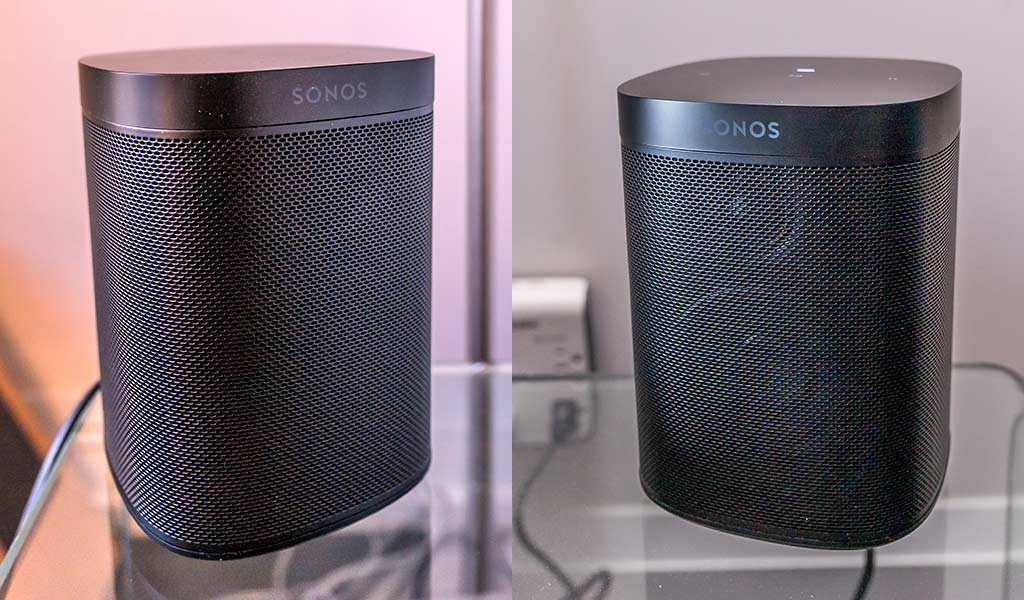 Basically, the main speaker (Beam, Playbase, Playbar) sits under the TV, while the two other speakers should be situated to the left and right—behind wherever you would be sitting while watching. The speakers should be about an equal distance away from the couch or seating area to balance things out symmetrically.

The process to pair all the speakers together is much easier than you would think. First, there’s nothing to connect physically, meaning the speakers communicate with each other wirelessly. Second, the Sonos app walks you through the process, which is really only a handful of steps. Go to Settings>System>(the room with your Beam, Playbase or Playbar)>Add Surround Speakers and the guide will take you step-by-step.

Once you’ve done that, you should get confirmation that setup is complete. But you’re not done yet. There are some other steps to take to finish this off.

Stay in the app and tap the room that now has the surround setup. From there, go to Surround Audio>Music Playback and select Full. This will ensure the rear speakers act as surrounds when watching TV, and a stereo pair when listening to music (only through the Sonos app, as far as I can tell).

Also in Surround Audio, you will notice that you can adjust the volume of the surrounds for either TV or music. Play around with that and see what works. Just don’t go too high because a disparity could drown out dialogue scenes in certain movies or shows. I found around 5-6 percent in a small room was great, but your mileage may vary. 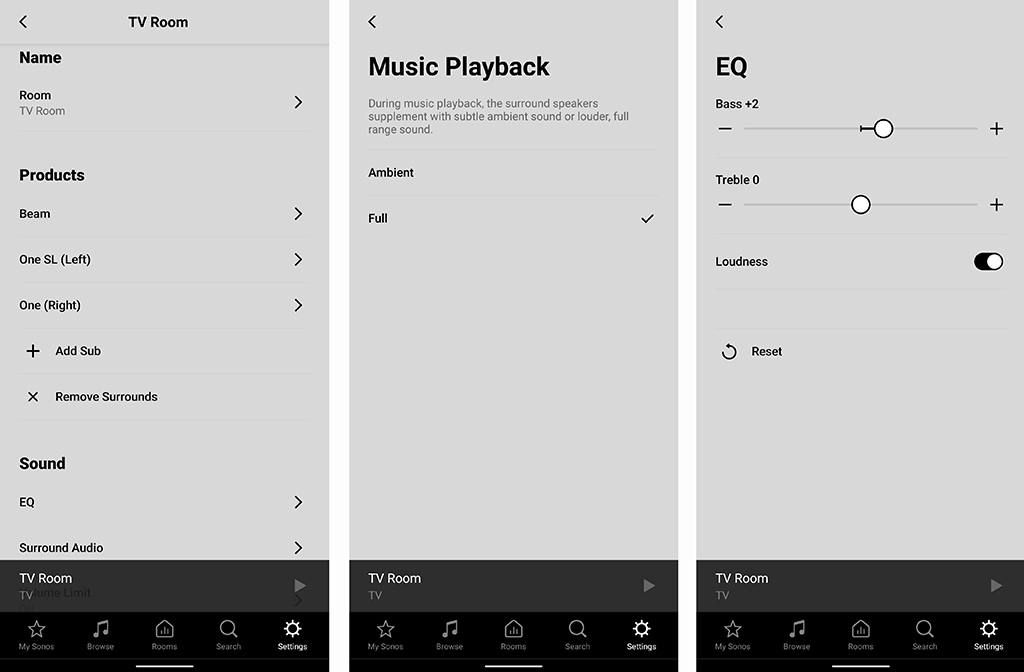 As with anything like this, you do need to make a few tweaks to make sure the system works as advertised. It’s important to note that Sonos supports Dolby Digital 5.0 and 5.1 surround sound. You will need to set your TV to Dolby Digital as the audio output through the HDMI-ARC or optical connection. Sonos also says that if you see Dolby Digital and Bitstream as options, always choose Dolby. Go to your TV’s audio settings and make the change there.

You will need to set other external devices hooked up to the TV the same way. That could be a game console or streaming box, for example. Blu-ray discs are outliers here because they are encoded in DTS, which Sonos doesn’t support. If your Blu-ray player can’t transcode the format into Dolby, then you may not get the full surround experience. If it can transcode them, then you will get something. Look into your player’s manual to see if that’s an option.

Popular streaming services, like Netflix, Prime Video, Disney+ and others, offer 5.1 surround on a lot of content. But they will defer to the device you’re playing from. If it’s an app built into the TV, then you won’t need to configure the app to output in 5.1. The same is true if you’re watching from a streaming box.

Google’s Chromecast and Amazon’s Fire TV Stick also handle it a little differently. Generally, if the content supports 5.1 surround, the app will output that when the TV is already set to it. The Chromecast works best if it’s from an app, rather than from a web browser, so keep that in mind. For the Fire TV Stick or Fire TV Cube, the situation is largely the same, albeit with fewer chances of problems with the connection. 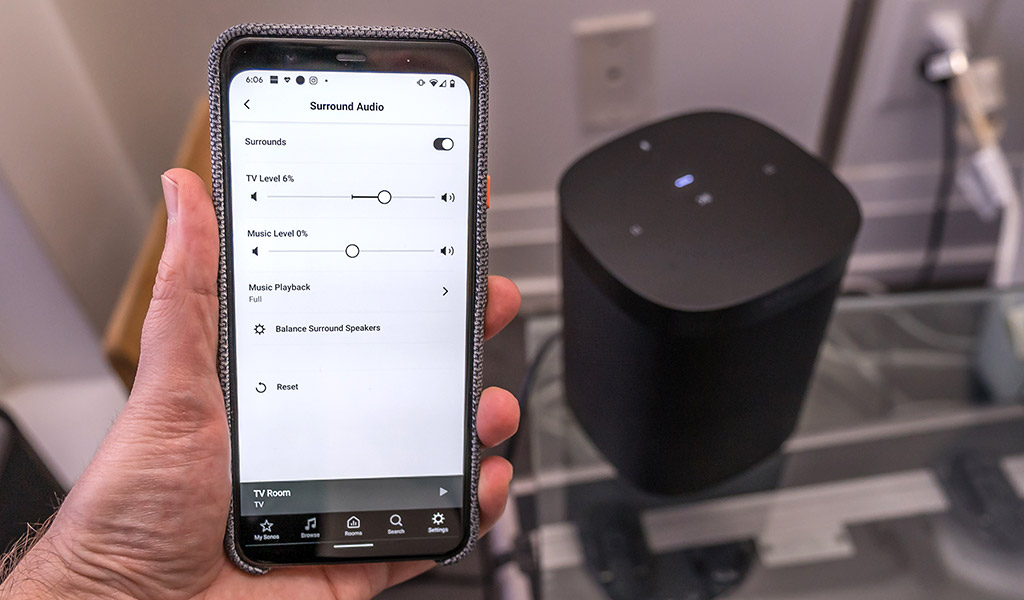 There’s no question a Sonos surround system is an upgrade from standard speakers or a single soundbar. The Beam sounds great on its own, but add two rear speakers—and especially the Sub—and everything comes through with undeniable verve.

What struck me about the system when I first tried it was how resonant it sounded, even without the Sub. For example, scenes taking place in nightclubs or sporting events made the background music and crowd noise fill the room. The same was true of explosions, rushing water or vehicles speeding along.

To be honest, dialogue is mostly unchanged, though I imagine the Sub could help with that a little. The main speaker handles voices, the rear speakers handle residual sounds and effects that come from the left and right front speakers (which the Beam, Playbase or Playbar would output).

For sporting events, it largely depends on if there’s support for 5.1 or not. When that isn’t an option, Sonos will always default to a stereo playback. You’ll hear a hint of sounds bleeding over to the rear speakers, but it’s hardly what you would consider “surround.”

Video games are awesome in surround. Footsteps or voices coming from behind your character will sound like they are to your own ears. The same resonance in movies and TV shows applies to games too.

I don’t know that you need to do it with two Play:5 speakers as rears, either. It’s definitely overkill in a condo or apartment, but if you want to really push it in a home theatre, you could use those and the Sub to really go for it. The best part is that you can always add the Sub at a later time if you don’t want to commit to it right away.

Music sounds great on the system, and I particularly liked live performances. You could adjust the bass or treble in case you find there’s too much sibilance or too little bass. Remember how I mentioned setting surround to Full in the settings? It works well for music because it brings out the power of the rears.

The higher quality the music stream or file, the better the experience. Tidal’s Hi-Fi is a good example, as the extra detail in every track comes through clean. I’ve never always liked music in a surround sound setup, but I got to like it a fair bit here. Everyone’s ears are different, and it is a subjective opinion, but that’s my estimation.

You can also still use whichever voice assistant you prefer (Google Assistant or Alexa), but in case you lose access, you can get it back by re-adding the main speaker. It happened to me and that’s how I managed to get Alexa working again.

A lot of this does depend on the components you have at home. If you have an AV receiver, that can change the overall setup because your playback devices will run through there. Newer TVs, especially those with the proper outputs and inputs, make this setup so much easier. The same goes for receivers. If you do run into problems, feel free to leave a comment and I will work to help you out.

That’s also true if you’re confused by codecs and standards relevant to all this. I know the terminology can be hard to understand sometimes, not to mention frustrating when it’s the reason something goes wrong with all this. Either way, this isn’t an insurmountable thing to adopt should you want to take the next step.

Check out the latest Sonos speakers and products to see what you think works best for your home.