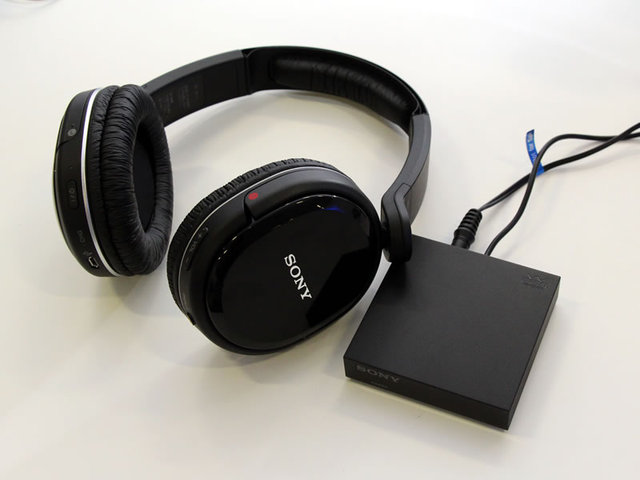 The Sony MDR-HW300K Wireless Headphone System transmits uncompressed audio between the base station (TMR-HW300) and the headphones (MDR-HW300). These are not bluetooth headphones, so putting them up to products in that category is not an apples-to-apples comparison.

The specifications of these headphones boast: 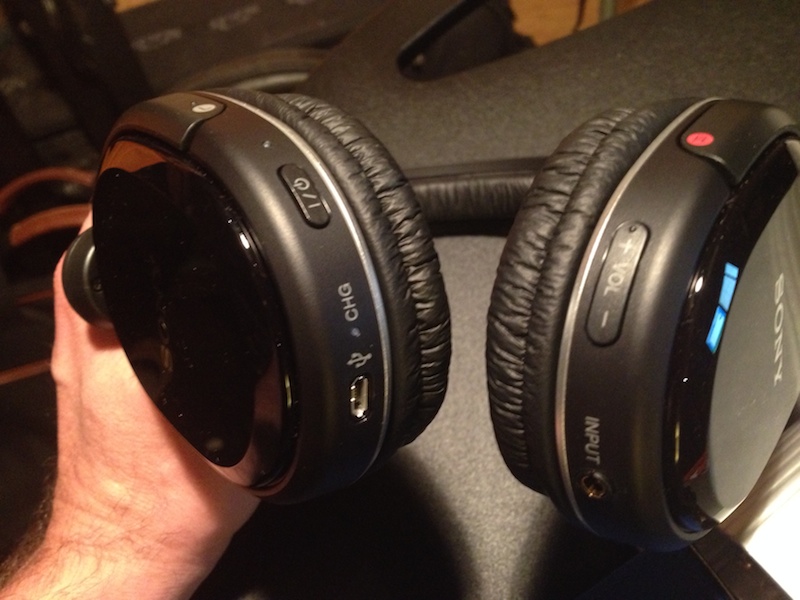 The whole system is well packaged and the instructions that arrive with the various components are easy to follow. In the box, you’ll find the headphones (MDR-HW300), a USB cable (for charging the headphones), a stereo mini jack to mini jack cable (for wired connection), a base-station transmitter (with attached mini-jack cable) and a power adapter for the transmitter.

The headphones are light – around 190g (6.7oz). The head-band is a matte-black plastic finish with padding at the top for your head. The earpieces are plastic and sport a high-gloss finish with the Sony brand name prominently displayed in silver.

The right ear-piece has a volume toggle and a ⅛” mini-jack input.

The wireless transmitter has a small green LED light that illuminates when there is an audio signal present. It flashes when the audio signal stops to indicate that the unit is in standby mode. The light will turn off and the transmitter will stop transmitting after 10 minutes of no signal, but will restart again after receiving an audio signal.

The headphone earpieces swivel so that the entire set can lie flat. Unfortunately, the headband is a solid stiff unit and lacks hinges and as a result, the headphones can not fold up into a more compact configuration.

The unboxing didn’t have any issues and was what you’d expect from Sony packaging and instructions. After charging the headphones (I left them for the suggested 3 hours), I took them out for a spin. 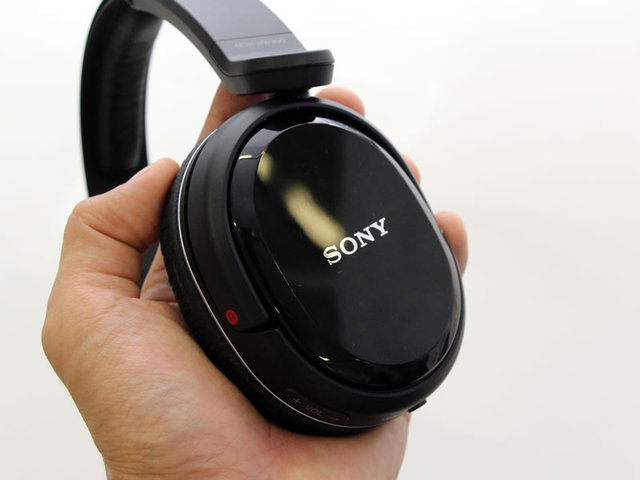 The headphones felt snug and secure when I placed them on my head. I felt that they would last a couple of hours comfortably, although I did feel that there could have been a bit more padding around the ears. The grills covering the drivers were in contact with my ear cartilage and started to get bothersome after long periods of listening.

My first use was listening to music while walking the dog. I used the wired connection plugged into my iPhone. The first nit-pick I have has to do with the wired connection. It’s on the right headphone whereas the vast majority of headphones I’ve used have the connection on the left. Perhaps it’s just personal conditioning, but I found it a bit annoying having the cord dangling from that side.

Sound isolation was quite good. I can’t speak to using these in constant noisy environments such as airplanes or New York City streets, but you will definitely have to remove the headphones to participate in a conversation.

Once I brought the headphones home, I tested out the wireless functionality. Once set up, the pairing between the transmitter base station and the headphones was seamless.

That was the Good News, Now… 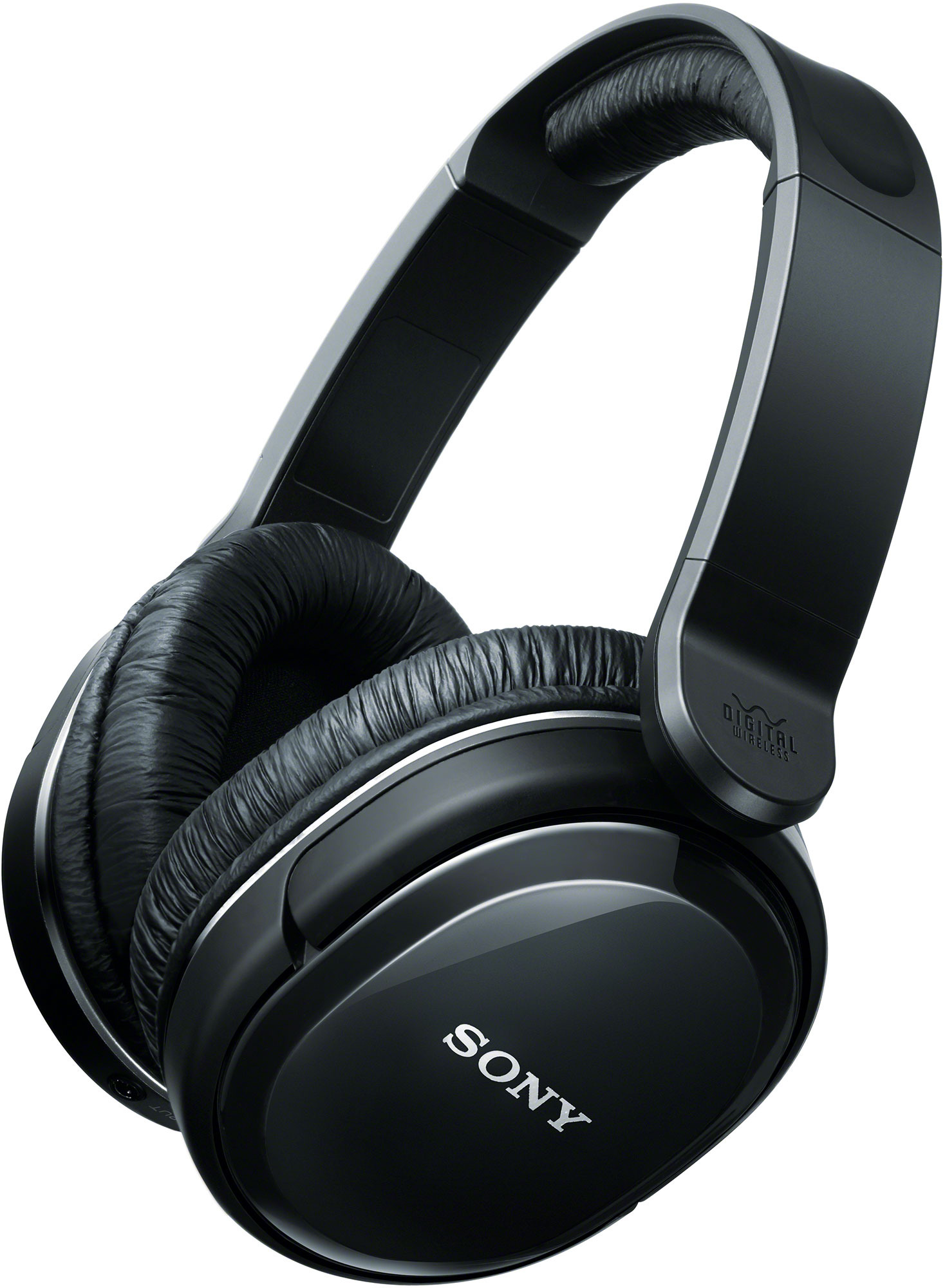 Unfortunately, the sound quality of the MDR-HW300’s did not live up to my expectations. The spec’d frequency response (although I’m skeptical humans can actually hear below 16 Hz) coupled with the relatively large drivers got me excited to hear music through these headphones.

I found the bass response, although impressive, to be overly hyped to the point of obscuring the rest of the frequency spectrum. The hype extends to the lower-mid frequencies and created what audio-engineers refer to as “mud”. The upper-mids and high frequencies were present but diminished resulting in the sparkle and shimmer from elements such as cymbals being muted. Bass-heavy material such as EDM and Hip-Hop caused the headphones to distort.

I saw that a few press-releases from Sony couple these headphones with a 9.1 channel surround model – the MDR-HW700DS. This led me to see how the MDR-HW300 headphones fair with home-theater use rather than music material.

The fact that these headphones aren’t Bluetooth was another clue that led me to think a more physically static listening activity such as watching TV was better suited for this system.

I set them up in my living room and ran through a few programs. The bass of low drones and sound design elements such as explosions and crashes was impressive and the clarity of dialog didn’t seem to suffer too much. However, some of the deficiencies I found in the higher-frequencies when listening to music were still present – wind, glass shattering, scrapes, etc. all seemed to be somewhat muted and subdued. 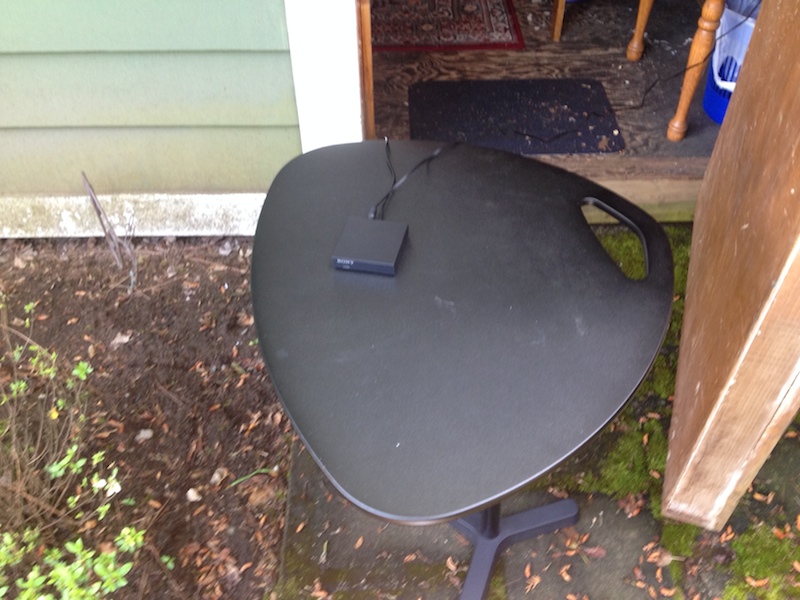 The wireless connection of this system didn’t fail when in an unobstructed room. Moving between rooms resulted in signal break-up and dropouts. The advantage of using the 2.4 GHz band for wireless transmission is that it has a longer range (better than 900 MHz banded devices) and generally requires smaller antennas. Unfortunately, the signal doesn’t navigate through obstructions (such as a multifloor house) very well. I couldn’t get to the spec’d 30 m range in an unobstructed area … inside.  I wanted to see how far I could take these headphones in an unobstructed area so I set the transmitter up in my backyard and walked around. I could only get slightly past half of the spec’d 30 m distance before the signal started to break up.

To Sum it Up

When it comes down to it, there are a lot of nice things about these headphones. They’re light, easy to use and they look quite good. The only big issue I had with the MDR-HW300’s was the sound quality. Unfortunately, for me, that’s a significant problem for a set of headphones to have.

Perhaps it’s the pair I received for review or perhaps it’s relatively low sensitivity rating of 98dB/mW for these headphones (“good”  sensitivity is expected to be in the range of 105-110dB/mW), but even after listening to material on different systems using both the wired and wireless connections, I did not hear any significant changes to the frequency response of these headphones.

If Sony were to even-out the frequency response of the MDR-HW300 – attenuate the lows and boost the highs, then these headphones would be a great contender. I wouldn’t rely on these headphones to critically listen to music. But if you’re looking for a set of wireless headphones to enjoy a film or TV show, you might want add these to your list to check these out. You can find them on the Best Buy site.