Toys really have to be engaging to keep a kid’s attention for any length of time, and one of my favourite toys the kids and I tested over the past few years has been WowWee MiP. Now MiP has gone through an upgrade, and this mini robot is back as MiP Arcade. What’s the difference between the original MiP and MiP Arcade? He’s even more fun to play with now.

My sons and I played with WowWee MiP Arcade over the past week, and we tested out everything he can do. I had so much fun playing the games myself, I found myself wandering over to MiP Arcade when they were at school.

Take a look at my review and see how this cute little robot can play app games, dance, and even carry you a drink.

Appearance and features of MiP Arcade

MiP Arcade is a self-balancing robot toy that measures 7.7 in. high. He’s a sturdy little guy, but he’s easy to pick up because he only weighs 680g. He’s meant for indoor play as he’s not waterproof or weather-resistant.

MiP Arcade is easy to set up. You’ll need a screwdriver to install the four included AA batteries in the battery compartment. Once you do, you’ll just turn him on and he’s good to go. MiP Arcade will balance himself and begin to roll around on your floor.

MiP Arcade comes with a basketball hoop attachment and three balls as well as a tray he uses to carry whatever you’d like him to bring you. We’ve balanced a can of soda on MiP, and he does a great job wheeling it around.

You’ll want to download the MiP Arcade App right away and pair your MiP with the app. He connects via Bluetooth, so it’s a really fast and easy process.

There are quite a few ways you can play with MiP Arcade, and he’s a really entertaining little guy we found ourselves drawn to over and over again. One of the first things I liked is how you don’t need a remote control or battery charger for him. He has infrared sensors, a microphone, and a speaker, so he’s controlled via gestures, sounds, taps, picking him up, or the app.

MiP Arcade comes with two attachments—a basketball net and a tray. The basketball net has three balls you can use to shoot hoops with him. It’s a fun game, especially considering he’s always moving around and you have to work to shoot the balls in the net. If you have the app open at the same time, you can see your points tallying up, but you can play without the app too. MiP Arcade will flash a light every time you score.

MiP Arcade is your robot butler

We had a lot of fun with the tray attachment. You can place it on MiP, and he will self-balance to bring you whatever is on the tray. It’s pretty funny watching this little guy lean back and forth in an effort to move with a heavy object, and he did great with everything from cookies to my phone as he rolled around the house. We placed a full can of unopened soda on his tray so he could take it to my son, and he did manage that for about a minute before he tipped over. It might have been a bit too heavy for him.

When you first turn him on, MiP Arcade will roll around and explore your house. He’ll keep doing that until you stop and play with him. Using gestures, you can direct him where to go, or you can tap him in different areas or use different combinations of taps to get him to do something.

He’s a very smart robot, and he has a range of emotions. Yes, he can get mad, and if he does, his light will turn red. I found the only way to make him mad was to tap him repeatedly.

Dance and make music with MiP

One of the modes we used the most was dance mode. Your robot will dance to his own music, but if you use the app to make music with him, he will also dance to music you create. You just add different sounds to a timeline on the app, or use your own voice to record a soundbite, and your robot will play your own voice. That function alone is enough to keep kids busy for quite a while. My son played different combos for over a half hour.

He’s an RC car too

You can control MiP Arcade in RC mode. You’ll need the app to do it, and he glides around on his Segway-like wheels anywhere you’d like him to. If you bump him into an object, he will make a sound and stop, but he won’t stop self-balancing. He manages to right himself quite easily, and I’m very impressed with his ability to navigate over floors and low pile carpets.

The app has a ton of great games you can play, and I spent far too much time with MiP in my lap playing brain train games. He plays the games along with you, making sounds or flashing his eyes.

Your kids will love MiP Arcade

MiP Arcade is a fun little robot, and my kids loved playing with him. He’s fun to use as an RC car or to spend time with shooting hoops, but he can also sit with you and have quiet time playing brain train games.

I like that he runs on AA batteries, so I don’t have to worry about recharging him all the time, and there is a battery indicator right on the app, so you don’t get caught off-guard before his batteries are really low.

If your kids have always wanted a little robot buddy, or you want a fun and engaging toy for them to play with, I really recommend MiP Arcade. My boys are 11 and 15, and they fought over him, so I imagine younger kids would absolutely love him too.

You can find your own Mip Arcade on Best Buy right now. 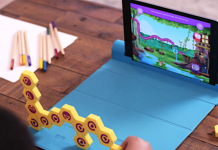 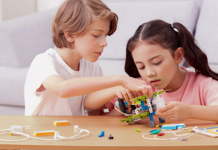 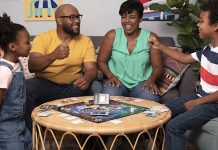