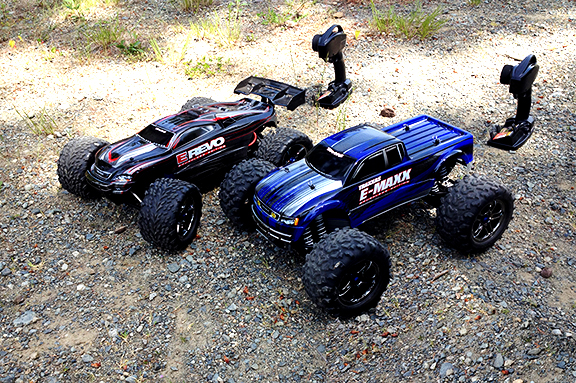 I got my hands on the Traxxas E-Maxx and E-Revo Brushless edition, one being a raised, and slightly burlier truck (the E-Maxx) and the other, a lower slung though no less tough, racer (E-Revo). These aren’t your standard, run of the mill, kids’ toy style, head to Toys R Us and grab something off a shelf remote controlled vehicles – no sir. The size and weight of the package I received would have told me that, but once I opened that bad boy, the box itself made it clear. These machines are serious business, that business is Fun… and business is good. Though, in fairness, diehard RCing is a deep game, and these machines are meant for tinkering and upgrading, and perhaps not for the faint of heart.

The power of these things is unreal. After having a good look at the E-Maxx and E-Revo, pouring over their insides, I wasn’t surprised but I was still taken aback. Even sitting still E-Maxx and E-Revo ooze power, their lines are aggressive and predatory, much like every good and speedy vehicle. Their components were all serious business, very high quality, they impressed me greatly. When I review toys and hardware, this is a very important first step for me. Dodgy parts speak to a weakness in the unit as well as the manufacturers, who are at that point peddling disposable goods. If you are in the market for a high quality experience, that experience stands on its weakest part or cut corner.

Satisfied, I fired them and put their tops back on; they literally jumped at the chance to go fast. Chewing up gravel at the lightest touch, these boss machines churned earth beneath their tires and spat it out contemptuously behind them. Their boxes boast top speeds of up to 65 Mph, and I can believe it.  They were off and down the road so fast… let’s just say there was a lot of hooting and hollering. They’re super tough too, since such power takes a minute (or a few more than that) to properly harness, the E-Maxx and E-Revo bumped heads a few times, with each other as well as fences, rocks… a neighbour’s car (tire). Then, when we finally had them figured out, it wasn’t long until they were airborne; our landings weren’t always the cleanest. Helped by huge fat tires and Baja worthy suspension, other than needing a helpful flip now and again, E-Maxx and E-Revo ate the rough stuff with glee and went back out for more. Though the controls are a little more complex than the race car ‘Junior’ has in the closet back home, it’s really the pure juice they possess that took getting used to.

To further the experience for the serious RC enthusiast (or just plain old tech nerd) is the Traxxas Link App. Requiring a remote with Traxxas TQi transmitter and docking base, as well as a unit with Traxxas TQi receiver, the Traxxas Link adds a huge amount of depth to an already very hands on hobby. Recording data real time, the Traxxas Link App will help you measure your various stats (top speed, heat, RPM, voltage) and gives you access to a deep suite of customization and settings options, and an unreal level of control over your driving experience. 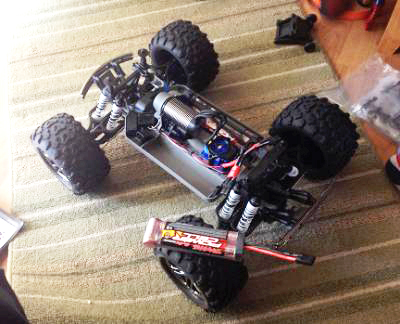 No surprise, these are big boy (and girl) toys. For folks who just want a really cool RC vehicle, but are looking for an easy ‘out of the box’ experience, you’ll want to turn your attentions elsewhere. What you get with these Traxxas models is the ground floor, which is still miles above the majority of your standard RC vehicle. Looking at the parts diagrams is like something out of the lab of one of Batman’s Science Villains. It made it very clear that to get the most out of these sorts of machines required a great deal of time, attention, and passion. Gears, Chassis, wires, batteries, the materials the parts are made of, their size and functionality, the aftermarket options seem endless. And probably vital for getting the most out of your gear. Which brings me to my one complaint of my time with E-Maxx and E-Revo and it’s a big one.

The battery life of these machines, at least the stock battery life, is incredibly disappointing; I was taken aback by it. I got about 10 minutes play time per charge, each vehicle has two battery packs, and it should be mentioned the vehicles don’t actually come with a charger. It was my incredulity at this that lead to my discovering just how deep this RC rabbit hole goes. Turns out, 10 minutes seems like a pretty standard number for an out of the box model. It’s through upgrading and tweaking that an RC person earns their battery time, and probably prove themselves as an initiate. In their defense, I do understand this sort of thing, and if the community excepts it as the cost of doing business, who am I to criticize? However, these vehicles are an investment. They aren’t cheap, and upgrades cost too. It seems to me that, if a person is committing to a Traxxas vehicle in the first place they should get a charger and more than ten minutes per go. Particularly since nobody is going to be satisfied using one of these machines in ten minute intervals. If you’re going to go so far as to create unbelievably cool toys that come with a very impressive design and level of engineering, you owe it to the world, as well as your product, to do better than ten minutes. I believe Peter Parker’s uncle had a saying about that sort of thing.

When I received these beasts in the mail I got the impression that maybe I was in a little over my head. That turned out to be fairly true. To properly appreciate these finely crafted works of modern engineering, you gotta get up to your elbows in it. I’ve gone deep as a member of enough weird little nerdy subgroups, (Fantasy/Art/Comics/Dark Souls, etc) to know a certain amount of immersion is required. These machines, clearly, aren’t for the weekend warrior, but they are practically made out of bragging rights. If you’re willing to get your fingers dirty and spend some time, I have no doubt that the RC realm is a very satisfying place. The Traxxas E-Maxx and E-Revo Brushless editions, despite my gripe about battery time, are pretty spectacular machines and a great starting place for anyone who has the inkling.

If you’re on the fence, there are entire Youtube playlists of people who know their machines better than I do, I highly recommend you check them out.

It’s also worth noting that E-Maxx and E-Revo are just the beginning for cars and parts at Best Buy.  Have a look at the Traxxas Brand Store and you’ll see what I mean.  If you’re in the market, there are a lot of options for you here and in a variety of price ranges.  If it’s Parts you’re looking for, same deal, from tools to gears to power sources and all points in between.  Oh, and don’t forget to pick up a charger, you’re gonna need it.