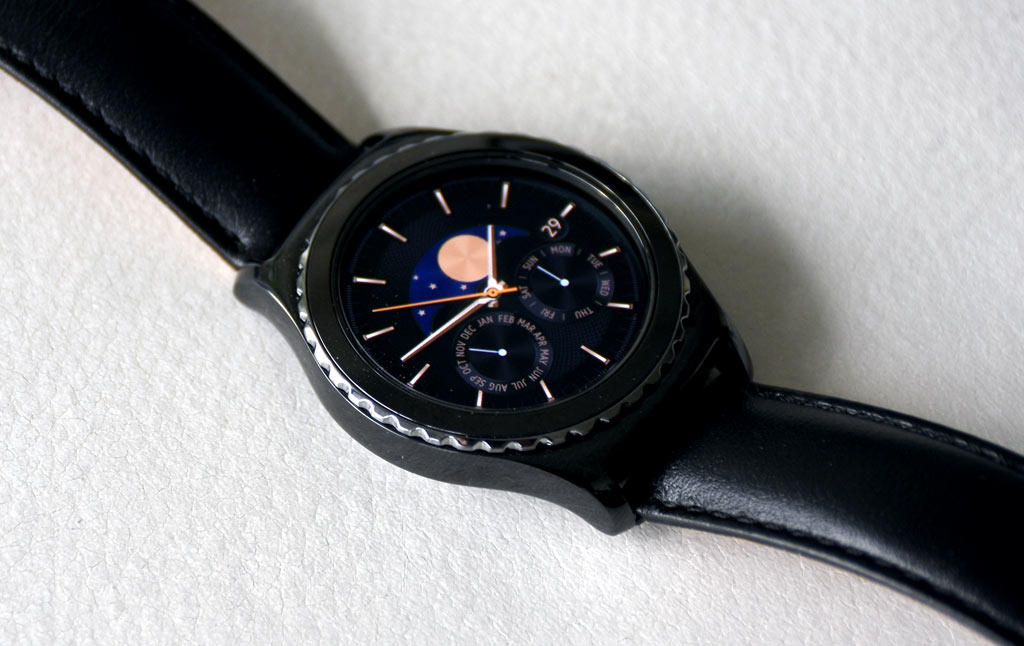 Samsung has tried and tried again to get it right with its smartwatches, having come to market with no less than six different iterations in about two years. All failed to really capitalize on what was then a wide open market looking for a trendsetter. The Gear S2 marks a turning point in both design philosophy and performance, making it the most complete wearable the company has made to this point.

I admit I had low expectations going into reviewing this, primarily because the previous Samsung smartwatches never failed to disappoint me. Bulky, buggy, unintuitive and devoid of apps, the previous models were like experiments to set the stage for something far more competent. I got to spend a lot of time with the Gear S2 Classic (but not the other Gear S2), and came away impressed with the execution.

The Gear S2 marks a radical pivot away from the past in that it’s a rounded watch face that is also smaller (31mm) and in the case of the Classic, doesn’t include a band that’s hard to change. The stainless steel case includes a rotating bezel that acts as the main vehicle for navigating the interface—a design choice that pays major dividends.

On the right side are two buttons. The top one goes back to the previous screen, the bottom is a shortcut to the apps menu. There’s a heart rate monitor underneath the body, along with a microphone for voice activation features via S Voice. Without a speaker, the Gear S2 doesn’t have the ability to do audible alerts.

The leather strap of my Classic review unit was nice genuine leather with a feeling of durability, but not quite the luxury I felt when wearing the Moto 360. I can’t speak to the Gear S2 with sport strap, as I only wore it once at a media briefing to see the device. Sport straps aren’t overly different across the board, whereas I find leather can most certainly feel like it is. The overall size of the watch is arguably such that it should appeal to both men and women, though the strap’s 20mm width might be a bit too much for the latter’s wrists. 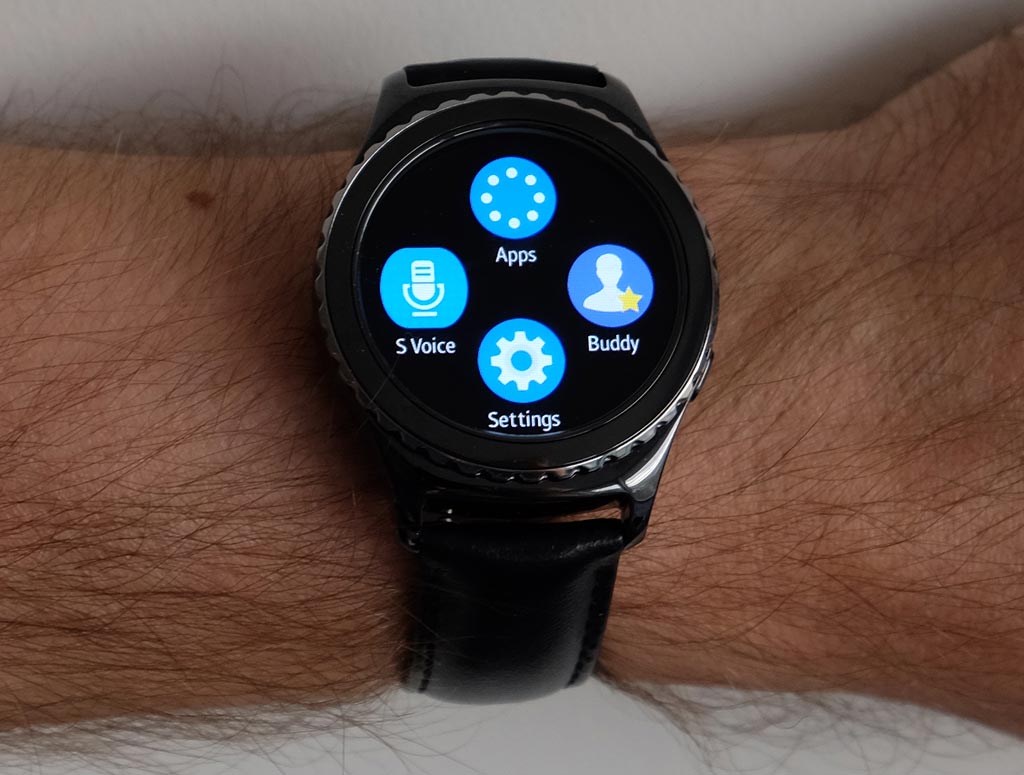 Internally, both Gear S2s have the same internal components, so there are no surprises there. The AMOLED display makes for one of the most vibrant of any smartwatch because of the colours popping out over the deep blacks. By default, the screen only lights up when triggered by a button, bezel or raising your wrist like you would to look at the time. There is an option to keep it lit up at all times, but that tends to guzzle the battery, reducing operation time by a huge margin.

The software, which runs on Tizen, puts the watch in a unique zone that is removed from Android, albeit not entirely. Tizen is a Linux-based operating system that no other smartwatch uses, and as such, requires developers to create apps to work with it. More on that a little further down.

The watch can work with other Android phones, so it’s not limited only to Samsung devices, but the execution in marrying those two comes with some trade-offs, which I’ll get to. In any event, this is by far the most attractive watch Samsung has produced, and just so happens to be the most interesting, too.

One thing about the fusion of hardware and software here is that the input methods are not mutually exclusive. In fact, it became harder to only swipe through the menus when the buttons and bezels offered shortcuts or quicker paths. The combination, however, is a unique case where the buttons and bezel can get to something, but can’t actually select it. Tapping a selection is the only way to do that.

It’s a usability mix that simply doesn’t happen with Android Wear smartwatches, given how that interface relies overwhelmingly on swiping on an X-Y axis to get around. Tizen has been designed differently. To the right of the main watch face is a homescreen showing onscreen buttons for apps, contacts, settings and S Voice. Swiping or moving the bezel further right cycles through the various widgets, like steps taken, calendar, weather, music, heart rate monitor and an overall health tracker. More widgets can be added, though the number of extras is limited. 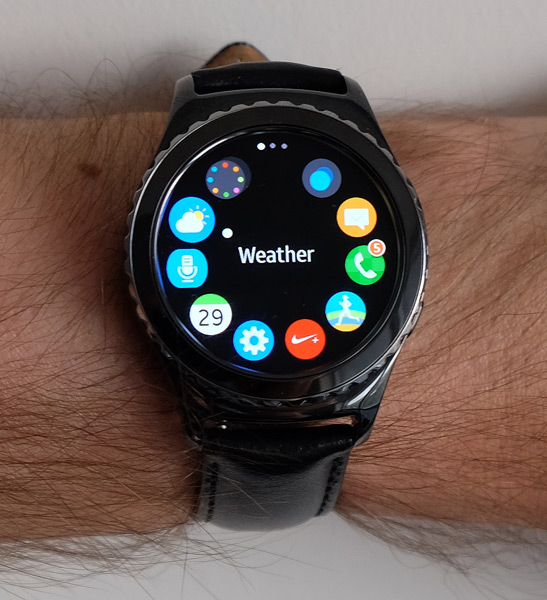 Going to the app menu shows a rotary list of different apps readily available to use. Many of these are what I call ‘base’ apps, like the ones typically pre-loaded onto smartphones. Third-party ones are a little hard to come by, but they do exist. Some are even good.

Finding them requires using the Samsung Gear app, which acts as the software custodian for the watch, allowing you to change any setting you want through it. New apps can be downloaded and pushed to the watch. Music files are also transferrable this way, making use of some of the 2.5GB of storage available (1.5GB is taken up by Tizen). Third-party apps require more TLC than native ones do because the watch’s Tizen-based software needs an extra download to connect the dots with the Android app running on the phone the watch is paired with. This isn’t an isolated instance, it’s essentially a requirement, sometimes even for every update the app goes through. Pre-loaded apps also require a companion app on the phone as well, even though these apps are actually installed on the watch and not pushed from the phone.

Notifications always show up to the left of the watch face, with a useful yellow dot appearing to indicate that something new has come in. They’re easy to manage and cycle through, and can stay where they are until you get rid of them.

Where the Gear S2 shines, however, is in sticking to the basics. The health and fitness tracking features were more than suitable for me, and the heart rate monitor certainly accurate. Seeing calendar entries, text messages, emails, calls, weather and music was convenient. Responding to texts and Hangouts messages via voice was also pretty neat, though I much prefer Google Now to S Voice for doing such a thing. S Voice is far too restricted, not being able to offer much in the form of contextual or current information. I couldn’t even ask it for a weather forecast or what the score was in a hockey game.

Pairing the Gear S2 with a pair of Bluetooth wireless earbuds, I could playback music stored on the watch at the gym without bringing the phone with me. The music playback widget will work with just about anything the phone is playing, allowing you to pause or skip tracks without touching the phone. Unfortunately, I didn’t get the benefit of seeing popular apps like Spotify or Google Play Music integrated into the watch with Tizen apps, meaning that navigating my music library still required going through the phone.

A cool feature was the watch’s own Wi-Fi coming in handy. By connecting it to a Wi-Fi network directly, I could still get some notifications to come in, which was great, though not proprietary, since Android Wear and Apple Watch can do the same.

Works with other Android phones 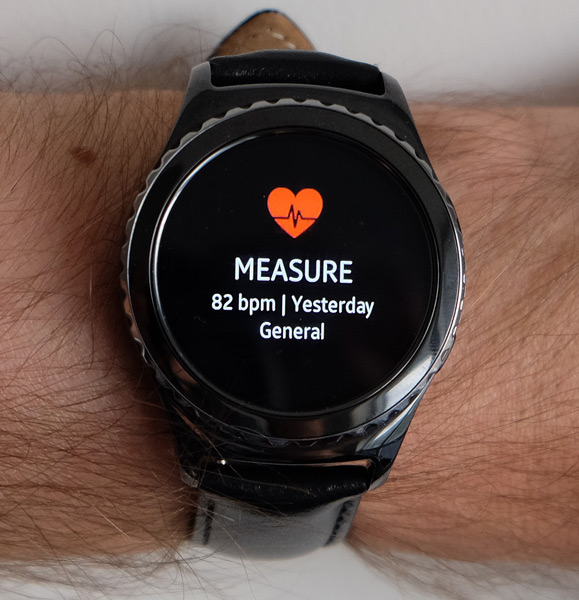 Yes, the Gear S2 will work with non-Samsung Android phones, but that shouldn’t be taken entirely at face value. It will work with any Android handset running KitKat 4.4 or higher with at least 1.5GB of RAM. Because much of the Gear S2’s functionality is driven by the Gear Manager app and the watch’s own storage, there is less of an awkward handoff for mixing Android with Tizen.

Still, the experience is clearly better suited to Samsung handsets. When I tried using the watch with a Nexus 6P, BlackBerry Priv and Moto X Play, it wasn’t the same with each one. Samsung’s first-party apps required downloading onto each of those phones in order to play nice with the watch. Notifications weren’t always a slam dunk to show up, and responding to them wasn’t as seamless as it was with a Samsung device.

There is no support for the iPhone, so that’s a non-starter. This wouldn’t be such a big deal, except that Android Wear now does support Apple’s phones, so it leaves the Gear S2 out alone in cross-platform integration. 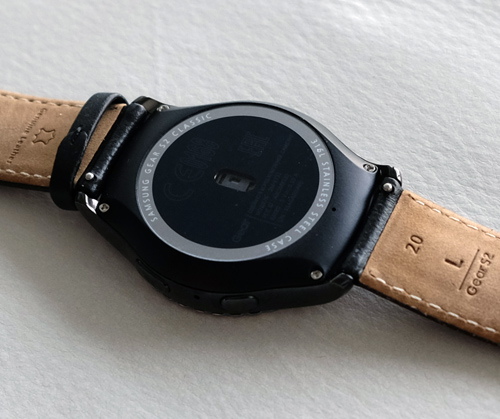 I came away impressed at how well the battery held up on this watch. I once went four days before having to charge it. That’s a far cry from the first Gear smartwatch Samsung released, which barely lasted a day. The best part is that the battery holds up when the watch is actually being used regularly throughout the day.

The AMOLED display is certainly one reason, coupled with the lack of GPS, and I dare say, the accelerometer’s lack of sensitivity. That last one was unintended by Samsung, but the fact the screen doesn’t light up on the smallest movement has a cumulative effect that keeps the battery going longer.

It supports wireless charging, as is evidenced by the charging cradle it comes with, but I also used it a fair bit with a Qi Wireless Charging mat as well.

Not only is this easily the best smartwatch Samsung has thus far, it’s also one of the most attractive of the whole lot in the market. On a few occasions, I had worn the Gear S2 on one wrist and the Moto 360 on the other, eliciting questions and comments from strangers on both. What caught me was that a group or two would disagree with each other on what they thought was the better watch.

That showed me, anecdotally anyway, that the Gear S2 passed the beauty contest in a way its predecessors never could. It also showed me that the software experience is one that needs more than a fleeting moment in exposure. If you have a Samsung phone, especially one of the top ones in the Galaxy S6 line or Galaxy Note 5, the Gear S2 matches best with those. If you don’t, I would suggest going in to see it firsthand before taking the plunge.

You can check out the Samsung Gear S2 available at Best Buy now.