The Pebble watch pairs with your smartphone to run apps right from your wrist. See that important email or text or who is calling without having to pull your phone out. 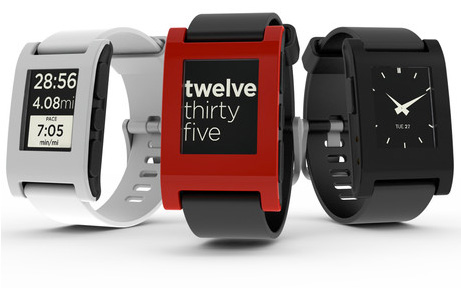 With its chunky design and simple screen, the Pebble has a retro feel to it. It reminded me of the early Seiko or Casio digital watches all the rage back in the early 90s. Although I found the face looked big on my wrist, I liked the clean lines with its basic black screen. The smooth plastic strap feels good with the smooth edges it was also really wide and the buckle fairly hefty. It definitely fits a guy’s wrist better. For aesthetics, I would have preferred a slimmer version with a scaled down buckle and strap. 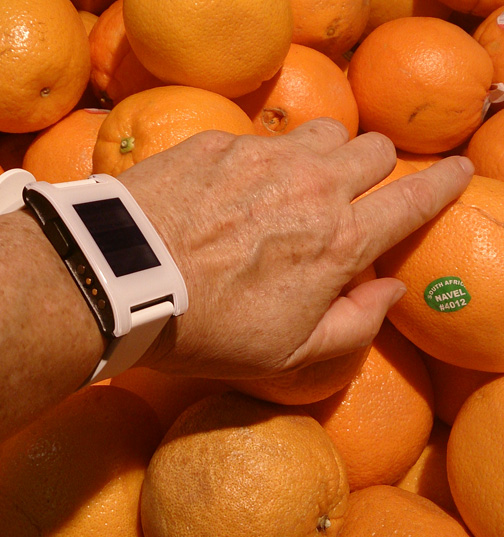 Despite the wide face and strap, the Pebble actually has a tiny screen that is 3.2 cm (1.26 inches) wide but with 144 x 169 pixel e-paper display. E-paper is not ink though but a black and white LCD display with darker than usual black text. This gives the texts and icon a crisper look, which makes it easier to read in daylight. For night time viewing there is a simple backlight that is dim enough to use in the theatre without disturbing other people. It does reflect some ambient light, which also supports the backlight.

The plastic casing is hard coated to be scratch resistant but I wonder how well it would wear. There are currently eight bright and bouncy designer colours in the plastic line or you can go for the seriously grown up look with Pebble Steel, created with brushed stainless steel. It supports most iOS and Android devices, making it a flexible device that can be easily shared by the family.

Inside the Pebble is equipped with a Cortex-M3 ARM processor with a three-axis accelerometer, a magnetometer, and an ambient light sensor. There isn’t a lot of memory so onboard storage is small, Pebble’s memory holds only eight apps and watch faces. 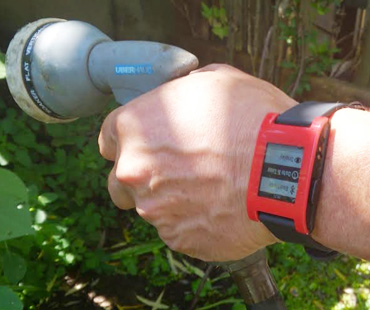 The other downside is no touch screen on the Peeble but it does spring to life with the flick of a wrist. You operate the watch using the four buttons. There’s one main left button to activate the backlight and opens the main menu. It also acts as the back button to move you out of any chosen options. There are three buttons on the right: The centre right button selects the options while the top and bottom buttons handle scrolling through the main menu.

The Pebble’s rated at 5 ATM water resistance so it’s good for swimming and showering. But seriously, would you want to be checking for emails or texts while in the pool or washing your hair? It’s also not going to work at the gym since it must be in Bluetooth range. Still it’s good to know it’s protected from splashes and other sources of water.

The battery is simple amazing with longer life than most other devices. It promised five days of life and it delivered. 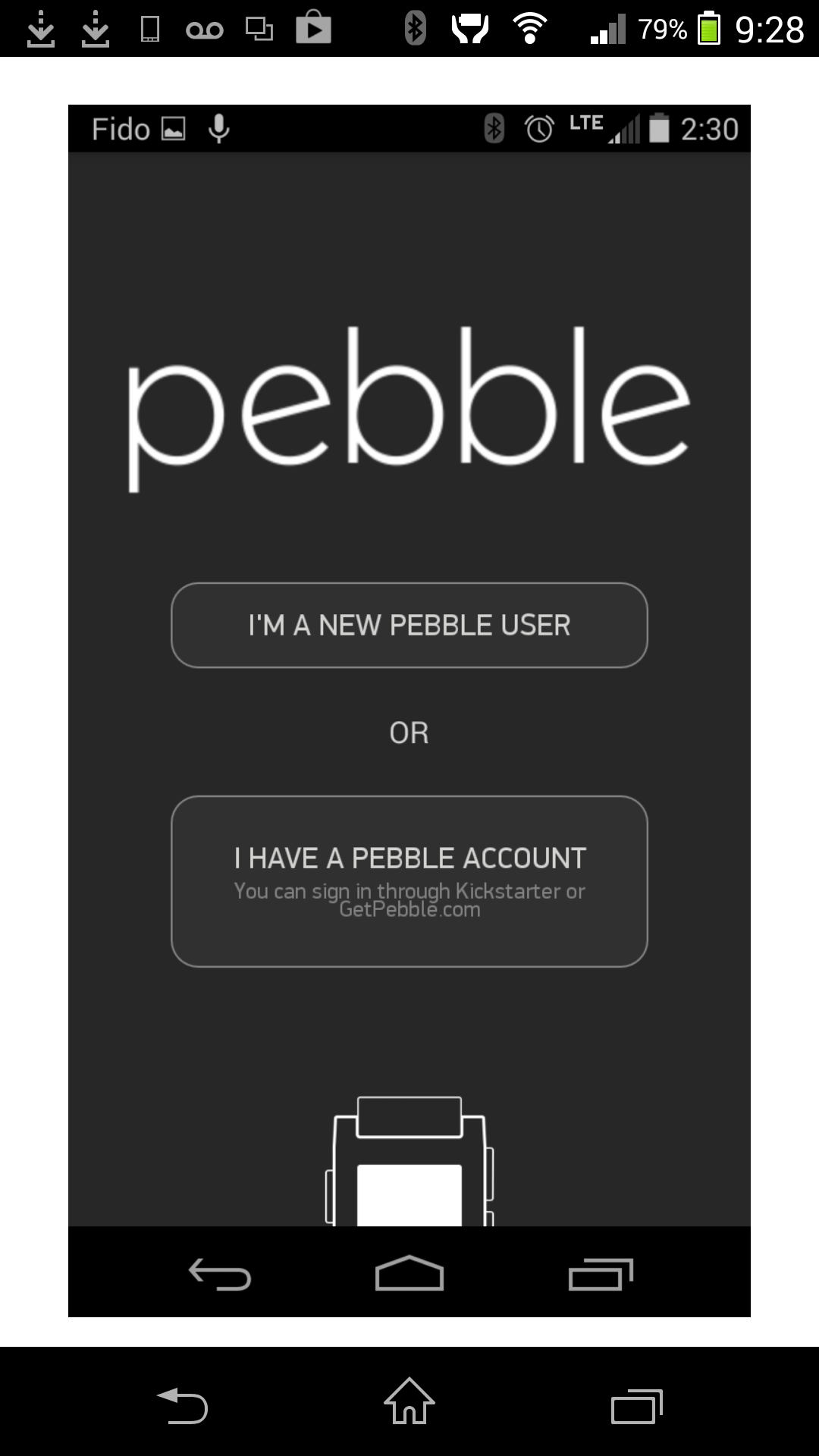 There is no manual with the actual watch so you’ll need to get onto the Pebble website for more instructions if needed. This is a very user-friendly device and set up was a breeze. It’s charged through your computer with USB charger that has two exposed metal connectors that fit into the watch. It took less than 30 minutes for the watch to be fully charged. During that time I downloaded the Pebble App to my smartphone and from there created a new Pebble account. Choose your name and password carefully. Your Pebble account stays open and you can never log out. To change anything with the account, you need to delete and install the Pebble App.

I turned the Pebble watch on by pressing and holding the top button for about eight seconds. It sprang to life quickly. Pairing the device was also smooth. I forgot to turn on Bluetooth on the smartphone, which caused some problems. After turning Bluetooth on, the Peeble App prompted me to “Allow” and then “Continue” to find and pair. The Peeble has to be between 6 and 9.1 metres (between 20 to 30 feet) from the Smartphone in order to work. Once I tapped my Pebble identifier after it appear in my Bluetooth list, I was ready to pair and start using the Pebble. 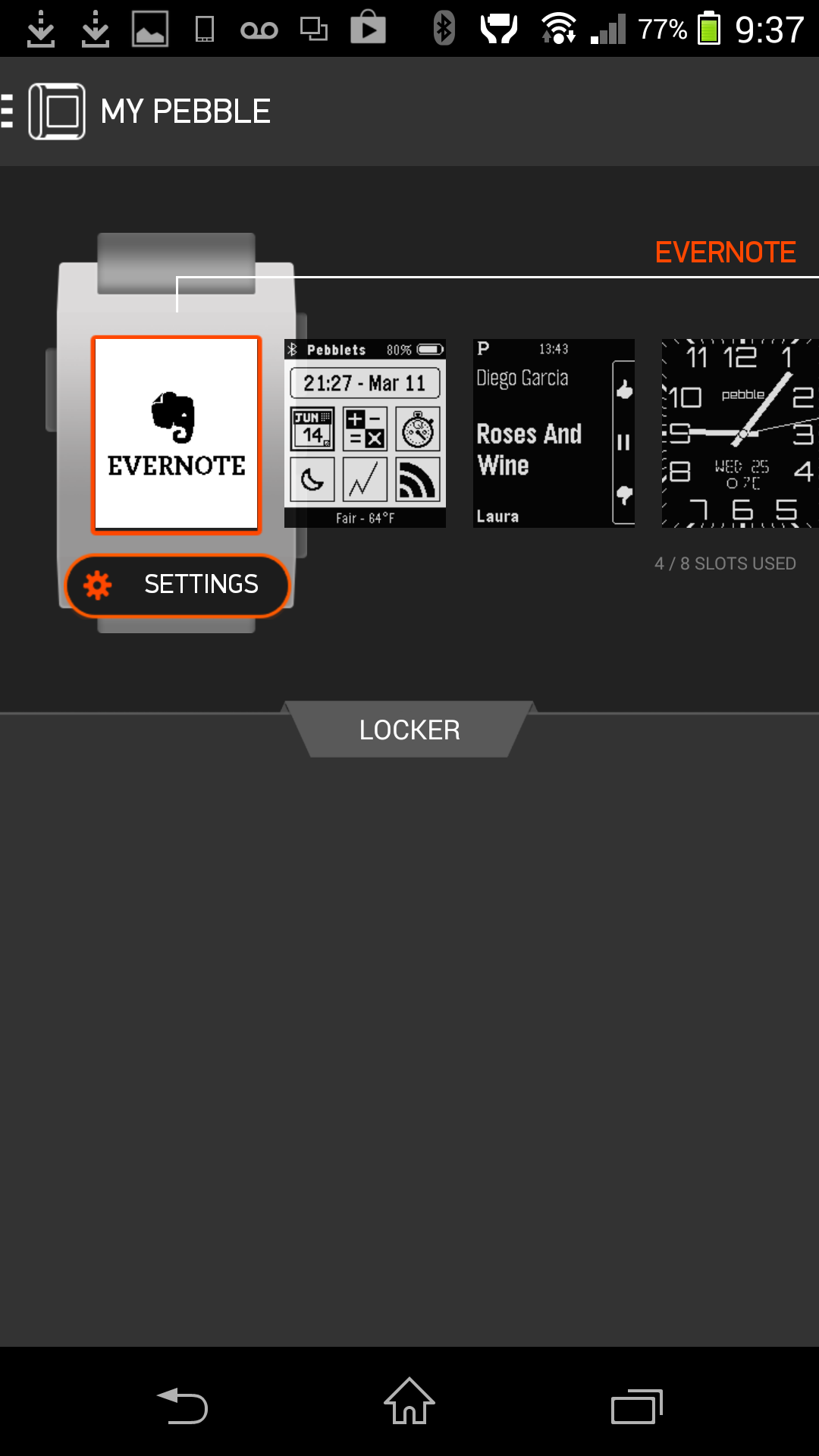 All about the apps

The strength of Pebble lies in its apps – there are dozens to choose from. The interface reminded me of shopping for e-books where you can download and collect as many apps as you want. Your excess apps are stored in your Pebble locker located on your smartphone. It was definitely fun shifting through the apps to mix and match according to the user. There was a definite division in the household: Boys liked the ESPN app for basic no frills scores and the many game apps; girls liked the calendar, camera and Yelp. My oldest tried the Pebblebucks apps to access her Starbuck account and use her barcodes. This will definitely be handy in the morning when rushing to get to class or work.

I started off with some basic apps for music, fitness and calendars. My favourite quickly became the Modern app giving different watch faces letting me choose between analog and digital. Switching the face to old school analog took a bit of the sting out of the clunky design for me. I was already using Runkeeper on the phone so it was an easy transfer to the Peeble for this app to track my daily walks and bike rides. I did like being able to glance down at the Peeble and see my progress while on a walk. It was less cumbersome than the phone and did act as an incentive. I also liked Evernote for keeping my various lists organized and Pandora for playing music from the phone.

The Pebble music player control is the only app with two-way direction to it. It controls the playba
ck for music on other your iOS or Android phone with the exception of volume control – that is still done through your phone. All other apps are uni-directional from your smartphone to the watch. 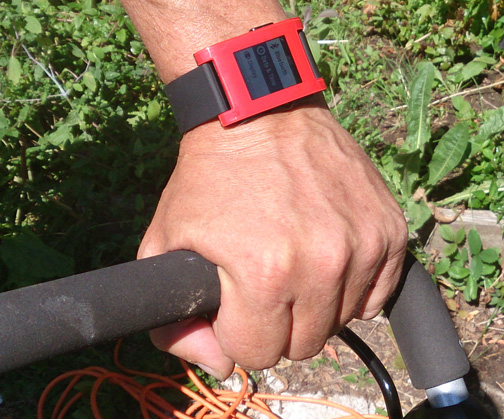 The Pebble is intended as a sidekick to your phone and not as a stand-alone device. It can go either way though. It can be used as a handy tool that helps you cut down on the time spent glancing at your phone or it could become another distraction with checking your wrist every few minutes. I found setting the Pebble to vibrate when receiving notification was also a good option. It was handy to be able to glance down and quickly see a text message sent to me and know whether it was urgent or not.

The final verdict: A great device for enhancing your smartphone experience and maybe unchaining you from the actual phone for awhile.

Be sure to check out all the other smart watches Best Buy carries to find your perfect fit.