One of the highlights from this year’s NAMM show (for me) was the USB/mobile microphones and devices that Shure announced. I was able to take the MV88 MFi (Made for iOS) microphone for a spin and have a review on the Best Buy Plug-in blog. I’ll be turning my attention to the other three devices from the MOTIV line for this review:

It’s no secret that USB recording devices have become a hot option for both amateur and professional recordists. Their portability, ease of use and quality improvements have elevated them to serious contenders – especially in the podcasting and mobile recording markets. The mic can be used with or without the included stand. The base attaches via a small ¼” socket that allows you to attach it to a video camera if you desire. When from the base, it can be set down on its flat bottom. The stand mounting has a curvature that allows you to position the angle of the mic for optimum pickup. The sound of the MV5 is decent. If you are intending to use this microphone to record spoken word or scratch out some ideas, then it will be fantastic for you. I didn’t find that it was able to represent the full-range of instruments such as a bass, piano or drums. Voice and guitar seemed quite good.

I don’t know if I’d call the Shure MV51 the “big brother” of the MV5 as it’s a completely different microphone. Except for sharing the first three characters in its model number and being USB/iOS microphones, the similarities end there. The MV51 is the most expensive device of all three ($249 at bestbuy.ca). The microphone by itself weighs 575 g and is 128 × 86 × 70 mm (H × W × D) Some of the features of the MV51:

This mic will definitely stand out. It’s got a nice hefty weight to it and a very unique design. The kickstand gives you the ability to adjust the angle of the mic when standing on a desktop. The rubber stopper unscrews to reveal a threaded receptacle that fits standard mic-stand threads.

I was quite happy with the sound of this microphone. In its’ “flat” mode, it captured a lot of detail and, to my ears, had no significant deficiencies in its frequency response. The MV51 is still a portable option, but compared to the MV5, it’s bigger, heavier and you lose some of that “cuteness” factor.

The MVi is a very straight-forward interface to use. It’s got a nice hefty weight to it with a great non-skid rubber bottom that keeps it in place – in fact all of the MOTIV line has this rubber material. Kudos go to Shure for thinking of this. I’ve had to deal with smaller interfaces that tip and become unstable once you start plugging cords into them. On the back of the MVi, you’ll find the micro-B, headphone and combo XLR/TRS jacks. On the front, all of the controls (mute, mode, gain/headphone volume and headphone volume selection) are presented on a cap-touch panel.

The MVi performed quite well – in a side to side comparison with identical mics plugged into the MVi and my Focusrite Pre-amp, there was virtually no perceptible colouration, distortion or frequency response deviation between the two.

Shure has done some smart things in terms of having the buttons and sliders on the MVi serve double duty in order to save space and avoid clutter. The gain slider also serves as the volume control for the headphones (once you press the headphone button) and activating phantom power to the unit involves holding down the headphone and the microphone mute buttons together.

I took a more in depth look at the MOTIV app that Shure developed for iOS devices in my review of the MV88. That being said, the app is really where you can get into the nuts and bolts of each of these devices. The DSP modes enable preset combinations of EQ, compression and limiting on board the MV5, MV51 and MVi. The MOTIV app allows you to not only select and enable these same presets from your iOS screen, but go one step further and set your own DSP parameters. You can turn limiting on or off, select from two compression selections and adjust a five-band graphic EQ.

Selecting presets will unveil whether compression or limiting is being applied, but EQ settings are hidden. I mentioned this in the MV88 review: I wish that Shure would publish what’s going on with the parameters on the limiter, compressor and EQ. It’s not a show-stopper by any means, but one of those things that would make the audio-geek in me happy.

When plugging each of these units into an iOS device, the MOTIV app re-configures the options it displays appropriately. The MV5’s three DSP modes and the MV51/MVi’s five DSP modes are displayed.

When I first used it in iOS mode, I found the MVi preamplifier to be lacking in sufficient gain – even when cranked to the maximum. Much to my delight, a new setting appeared when the MOTIV app recognized the MVi – a 20dB boost! This helped get the signal boosted, but unfortunately introduced some more noise.

There’s a lot to like and very few nits to pick with the Shure MOTIV line. The MV5 is a solid choice for the podcaster or musician who needs something to quickly record ideas on the go. The MV51 is a step up in sound quality and features from the MV5, but comes in a bigger form factor and price bracket. The MVi is a simple but very versatile portable interface one can use with traditional XLR dynamic and condenser microphones and/or instruments.

Will the MV5/MV51 replace your traditional non-usb mics in your closet? Probably not.

Will the MVi replace your usb/firewire/PCIe interface and pre-amp? Again, probably not.

But, as with the MV88, the MV5, MV51 and MVi are intended for use as mobile audio-capturing devices. And with that in mind, I’ve got to say, Shure has come up with a line that do that well. Very well in fact.

It goes without saying that Shure products are built with ruggedness in mind and the MOTIV line is no exception. They are simple to use but also have enough extra features to be adaptable to different situations.

Check out the Shure MV5, MV51 and MVi at a Best Buy store near you, or feel free to try one out through BestBuy.ca. 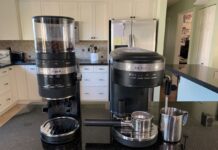