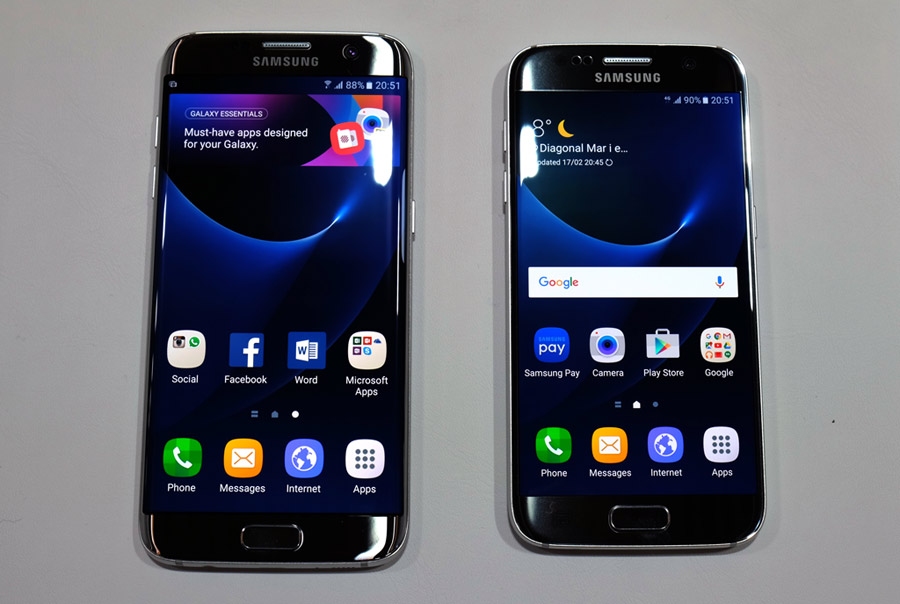 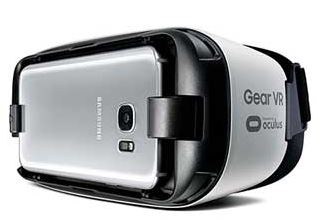 Samsung made its annual splash today on the eve of Mobile World Congress in Barcelona, unveiling the new Galaxy S7 and Galaxy S7 Edge smartphones. Despite some differences in design, both devices have many of the same components and features, maintaining a high level of consistency between them. In addition to the new duo, the company also announced the Gear 360, a standalone camera that shoots 360-degree photos and video.

Where there were three flagship models in the Galaxy S line last year, the company has cut it down to two: the flat mainstream Galaxy S7 and the larger, curved Galaxy S7 Edge. The similarities between them extend to the glass-and-metal bodies (including IP68 water-resistance), camera (rear and front) and internal components, like the processor, RAM and microSD card slot for memory expansion.

The overall design isn’t a huge change this time around, like it was last year, when Samsung got away from using plastic and went the glass-and-metal route. Aside from the inclusion of the microSD slot and making the body water-resistant, the rear camera has been recessed to make it almost flat with the back. It’s a nice tweak that gets rid of the protrusion that was so obvious with the S6 models. With an IP68 rating, the water resistance amounts to about five feet of submersion for up to 30 minutes.

Fast Charging 3.0 is supported, ensuring that you can get a lot of juice when in a crunch. Wireless charging is also of the fast variety, and both phones will continue to support the two competing wireless charging standards, Qi and PMA. Inside is a 3000mAh battery for the Galaxy S7 and 3600mAh for the S7 Edge, both boosts from last year’s capacities, which should lead to longer life on both, especially if the Exynos 8890 processor does its part.

The fingerprint sensor on the home button remains the same. As do the headphone jack, microUSB port and speaker at the bottom.

This new duo also seemingly spells the end of the white and blue colour schemes that have defined the Galaxy S line for years—at least for North America. Other markets will get a white version. Chromatic tones now rule the day, with silver and black among the options to consider. There is a titanium gold as well, though plans to release it in Canada are still being ironed out, I’ve been told. 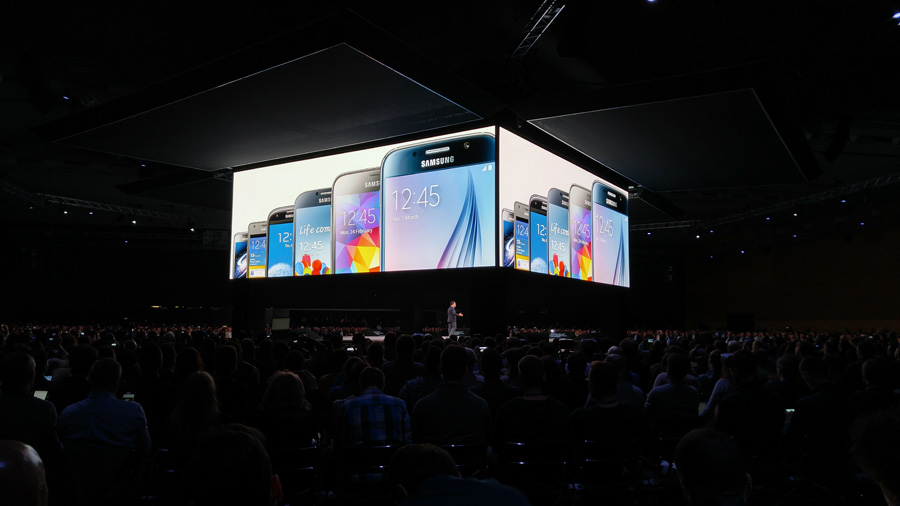 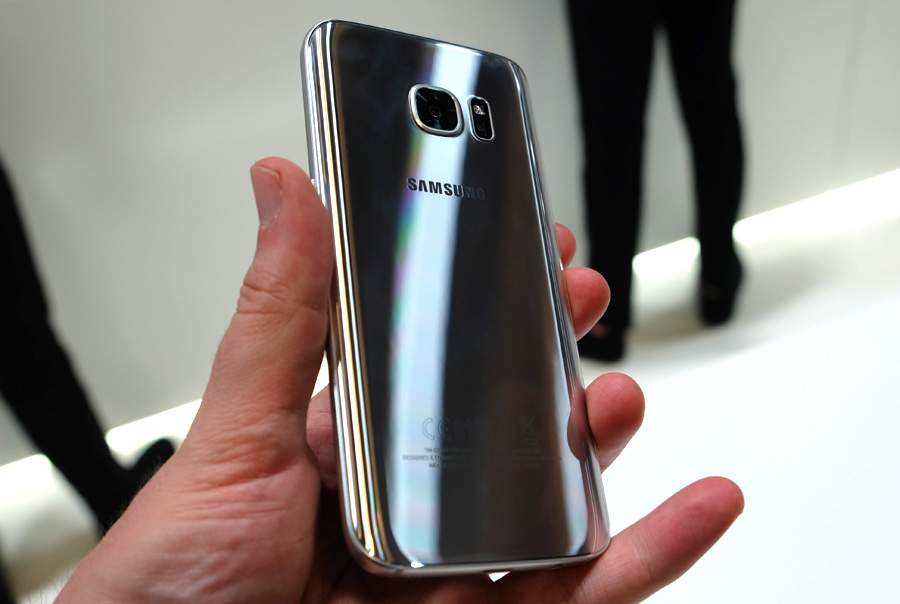 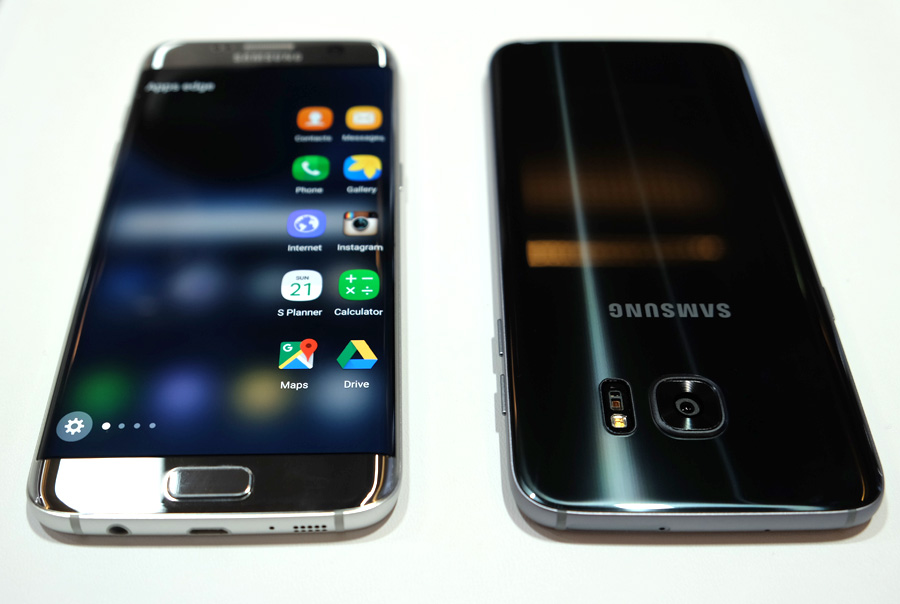 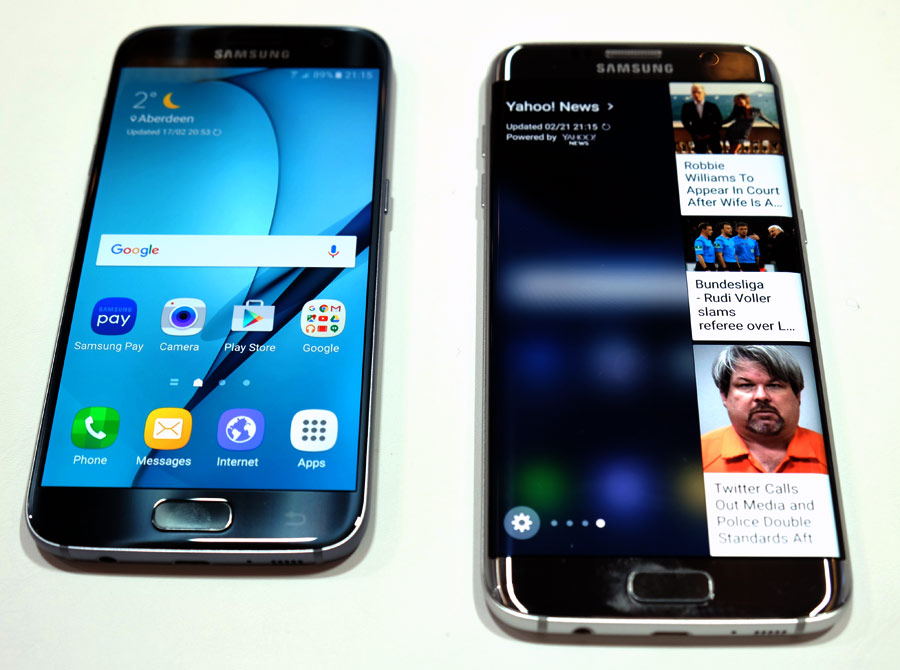 While it may seem like a drawback to move to a 12-megapixel image sensor, the very wide f/1.7 aperture and larger micron pixels inside will most likely result in an upgrade in both performance and composition because of how much extra light can pass through. Without properly testing it, it’s too early to conclude anything, but given that the Galaxy S6 models did very well with the f/1.8 aperture and smaller micron pixels, photos should turn out even better on these two devices.

The use of dual pixels, which boils down to technology that mimics how human eyes see things, promises to enhance photos further, but only real-world testing will prove how true that really is.

In particular with the S7 Edge, the body is 3mm slimmer, despite having the same 5.5-inch screen as the Galaxy S6 Edge+, making it a little easier to wield in one hand. The Edge UX software also gets a newer look by encroaching further into the display.

This culminates in what should be a more effective user experience that offers more. AppsEdge presents up to 10 app shortcuts. PeopleEdge carries on the same colour-coded contact shortlist from last year’s devices. TasksEdge is an actionable shortcut to skip steps to a specific function, like, for example, launching the front-facing camera for a selfie or messaging someone specific on your contact list.

Panels for news, contacts and apps will get wider treatment, showing off more visuals to make them stand out more. There are a number of options already available to select from, and word is that Samsung will try hard to bring in more from other developers.

The Gear 360 was unveiled, yet remains somewhat of a mystery device. Smaller than a tennis ball, it has dual 195-degree 16-megapixel lenses that shoot simultaneously, and can then be merged together for a full spatial 30-megapixel photo or 4K video. Both Galaxy S7 handsets will be equipped with the processing power and app to render these images directly through a Wi-Fi Direct connection.

It has a simple record and OK button at the top for manual control, though the phone can manage all that, too. There is a standard tripod mount at the bottom, with a battery compartment on the side that also houses the microUSB port for charging and file transfer to a computer. The natural progression from there is to view the content on the Gear VR headset. 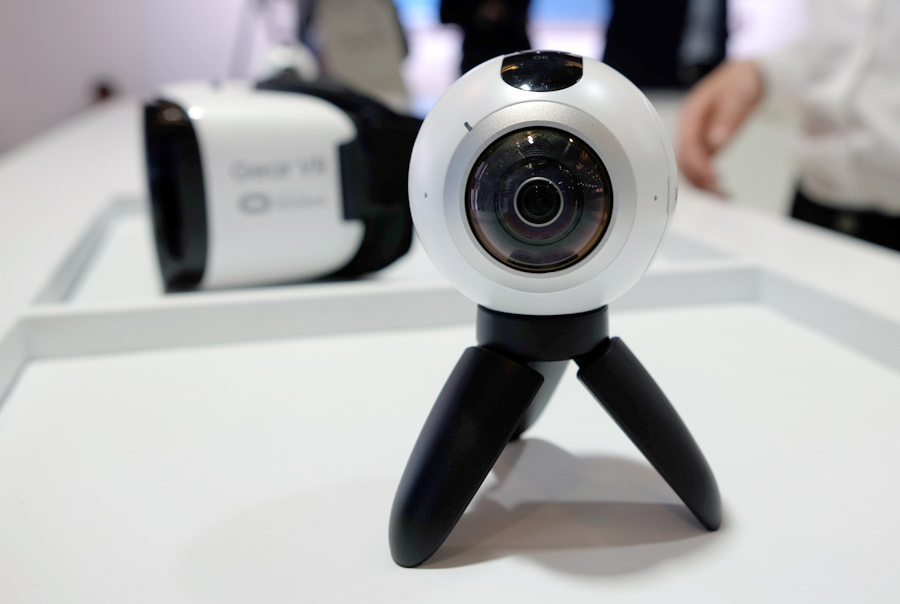 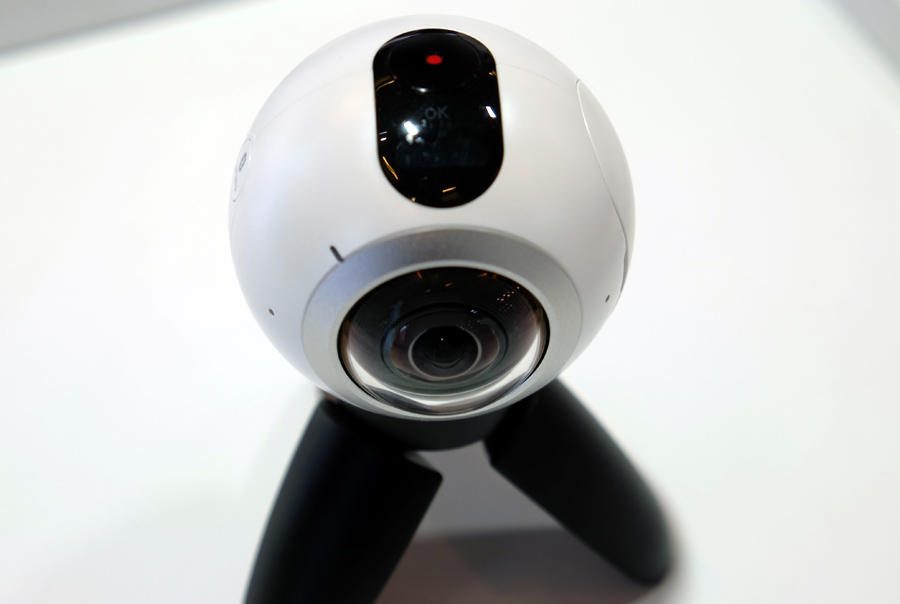 Facebook CEO Mark Zuckerberg shocked the capacity crowd at the event by appearing personally to talk about how Samsung is pushing VR to the mainstream, with help from the Oculus Store, the VR apps and games marketplace owned by the world’s top social network. This portends a closer relationship moving forward, but no concrete details were provided to illustrate what that means in the long run.

There is no official release date for the Gear 360, other than sometime later this year. It’s also unknown if there will be backward compatibility with the Galaxy S6/S6 Edge/S6 Edge+ and Galaxy Note 5.