It’s not often that a technology company has the kind of fall that Microsoft is experiencing. Formerly a software company, it’s pushing back to the forefront with Windows 10—a new operating system with modern features and the ability to unite the mobile and desktop experience in a way that’s never been pulled off before. It also rolled out a new version of its ubiquitous Microsoft Office productivity suite.

But the new Microsoft is also involved in hardware design. The Surface Pro 4 begins rolling out to professional users who want the best of both worlds (tablet and laptop), and for the first time ever, Microsoft is producing its own laptop in the all new Surface Book. As if that wasn’t enough, it’s finally time for new Lumia smartphones, including the Windows 10-powered new flagship Lumia 950 and Lumia 950 XL duo.

If you haven’t been paying attention to Microsoft’s many announcements over the past few weeks, here’s what you have to look forward to from the company in fall 2015.

With the Surface Pro 3, Microsoft got the “big tablet for professionals” formula right. A large, high resolution touchscreen display, powerful CPU able to run desktop Windows software, ports for peripherals, a stylus for drawing or writing, and a kickstand with optional keyboard cover accessory to essentially transform into a Windows laptop.

The Surface Pro 4, announced on October 6, doesn’t mess with the formula, but ends up being the best Surface Pro yet. The display is slightly larger (while keeping the same dimensions as last year), so you get a little more screen real estate while remaining compatible with previous generation peripherals. The optional Type Cover gains a larger glass trackpad and chiclet keys for a better typing experience, the new Surface Pen has a magnetic mount and one-click Cortana access, and naturally this one is faster than ever thanks to 6th generation Intel Skylake CPUs.

You can pre-order the Surface Pro 4 now.

While the Surface line is essentially tablets that can be converted into Windows laptops with the help of an optional keyboard, Microsoft has introduced an all new device that is a Windows laptop that can be turned into a tablet at the push of a button.

The Surface Book is a convertible, 2-in-1 laptop but make no mistake, this is a no compromise laptop first and foremost. Microsoft has designed it to take full advantage of Windows 10, including a 13.5-inch multitouch display with 3000 x 2000 pixel resolution. With the ability to load the Surface Book with up to 16GB of RAM, a 512GB SSD and a 6th generation Core i7 CPU, it’s also a powerhouse of a laptop that Microsoft says is 50 percent faster than a MacBook Air. And like Apple’s ultraportables, the Surface Book is thin, lightweight and offers all-day battery life. Unlike Apple–which uses aluminum in its laptops—Microsoft went with a magnesium allow body.

The Surface Book has another advantage besides performance. Its innovative hinge lets the Surface Book display be twisted to face to the back, like other convertible laptops. But at the push of a button, the display is released altogether, becoming a thin and lightweight Windows 10 tablet.

The Surface Book is also available now for pre-order.

There’s been a bit of a pause in the world of Windows smartphones while waiting for Microsoft’s purchase of Nokia to fully play out.

Windows is back in the smartphone game, and just in time to take advantage of Windows 10’s Continuum feature. In the new Nokia 950 and 950 XL, Microsoft has an answer to the Samsung Galaxy S6/Galaxy S6+ and the new iPhone 6S/iPhone 6S Plus combo.

These are big (and bigger) Lumia flagships devices with powerful CPUs (liquid cooling is used), Quad HD displays, USB-C ports, plenty of RAM and the increasingly rare ability to inexpensively expand onboard storage using a microSD cart slot. True to their Lumia heritage, both are equipped with an impressive 20MP PureView camera as well.

Many of us on Plug-in have been writing about Windows 10 and with good reason. Microsoft’s new operating system is a big leap forward in technology and features, while showing that Microsoft has been listening to its customers by restoring a familiar desktop interface. Even better, for many Windows users (including those running the less well-received Windows 8), the upgrade to Windows 10 is free.

You can read all about Windows 10’s cool new features here, and in detail throughout Plug-in.

Finally, there’s Microsoft Office. This is probably the most widely installed software application on the planet—there’s no doubt that it’s far and away the most popular productivity software.

In mid September, Microsoft released the newest version, Office 2016. Featuring a new focus on collaboration and Windows 10 integration (Mac users still get a new version, but no Windows Hello or Cortana). While you can buy Office 2016 as a standalone package, Microsoft also announced a big change in how it will handle its release strategy going forward. Instead of having to wait for several years between releases to get the latest and greatest new features, Microsoft will roll out the enhancements to Office 365 subscribers as they’re available.

Over the past two years, Microsoft has largely re-invented itself, from a new CEO to a newfound determination to offer its services regardless of platform. This fall is full of new products and promises to be a spectacular one for the company. Holiday shoppers will hunting for new Xbox One bundles, health and fitness buffs will be eying the new Microsoft Band. Add exciting new hardware like the Surface Pro 4, Surface Book and Lumia 950 into the mix and the massive usability, security and feature enhancements of Windows 10 and Office 2016, and you have the recipe for a very merry holiday season indeed for Microsoft.

Top 5 laptops and tablets for school or working from home 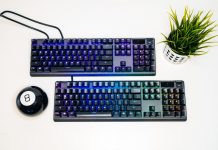