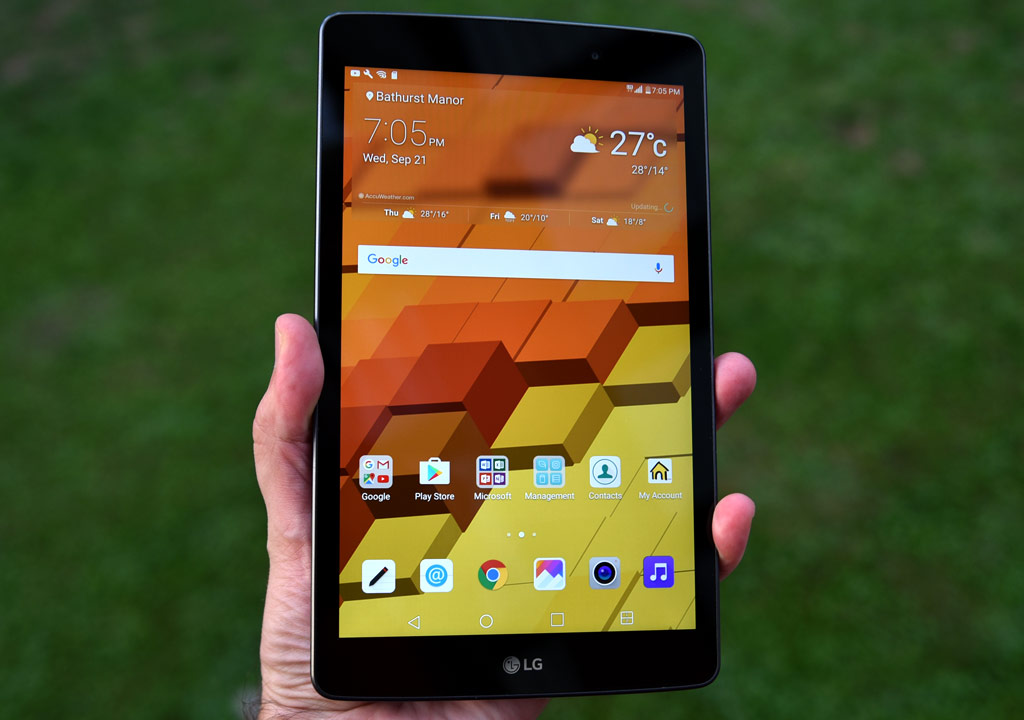 Finding a tablet that doesn’t do it all is easier than one that does, and it’s clear early on that the LG G Pad III falls under the former camp because it isn’t designed to perform like a premium device would. With that in mind, and the interesting inclusion of a blue light screen filter to go easier on the eyes, this is a tablet worth considering if you want to keep usage light.

LG didn’t pack its newest tablet with components or features that will stand out, and that’s probably the point. Despite being in a fairly crowded category, the G Pad III has a few things going for it that are worth considering: it’s a nice size, has a good screen and offers 4G LTE capability (from Rogers or Fido) through its SIM card slot.

There are trade-offs to this, of course, but I’ll get to those as I move along.

There is nothing remarkable here in the overall design. The G Pad III looks like a black slab of glass with a rubberized plastic back that was more navy blue in my review unit. The power, volume and reader button are on the right side, with the SIM and microSD slots below. The headphone jack and USB port at the top, microUSB and stereo speakers at the bottom. On the back is the 5-megapixel camera, with another 5-megapixel lens facing in front.

One of the standouts on the device is the “QuickButton”, which removes all the blue light (and pretty much all colour) from the display to make it look more like an eReader screen. The idea in doing this is to take away the blue light for easier reading, especially before bedtime where that kind of harsher lighting can have a negative impact on sleep patterns.

The other two are connections. The nanoSIM card slot allows the tablet to have Internet access wherever there’s a signal. Then there’s the USB 2.0 port at the top hidden underneath a cover. Having that makes it possible to plug in thumb drives and external drives to copy content in either direction.

The microSD card slot is expandable up to 2TB, but there is a caveat to how that works. Though Google made it easier to store apps onto microSD cards with Android 6.0 Marshmallow, the option doesn’t seem to exist on the G Pad III. It didn’t even show up when searching through the Settings app.

That’s a shame because of the 16GB internal storage, only 9GB is available to use after the system software and preloaded apps are accounted for. That’s not a great deal of space for larger apps that can bloat further with saved settings or offline content. And without a way to save app data to the memory card, space could become an issue if you like to use a lot of apps. 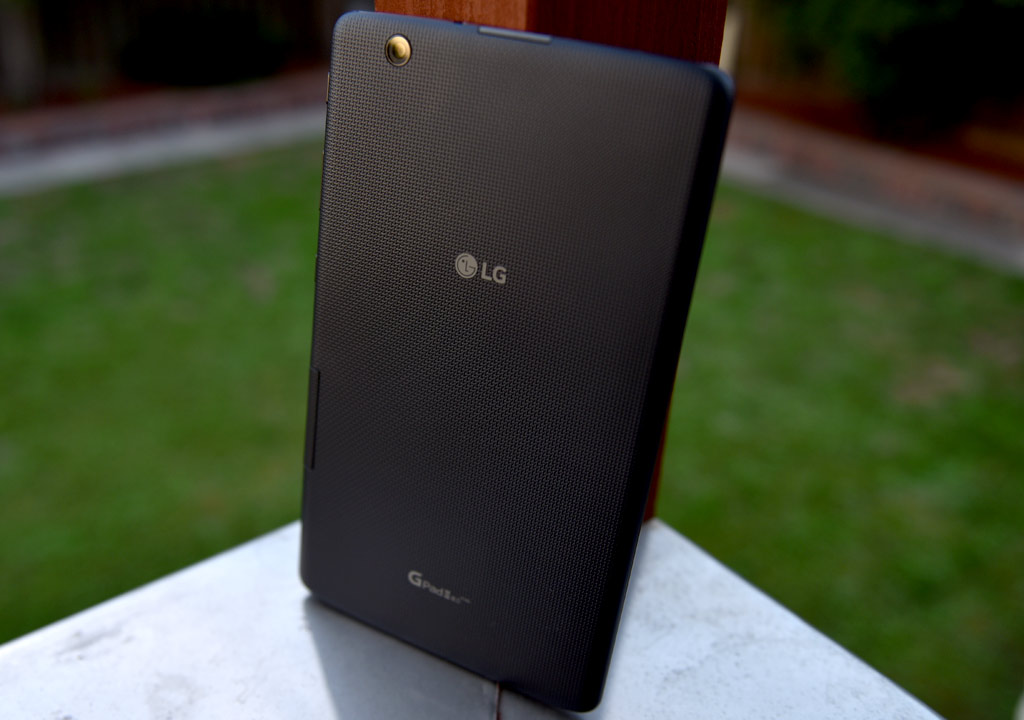 What offsets that problem is the fact the G Pad III is not the tablet you buy for serious tasks. This isn’t a productivity device (though it can certainly assist) nor a gaming tablet to play the most demanding titles. Those two use cases tend to take up room, and by keeping it casual in both instances, you’re likely to save a little space.

Even so, apps can take up space anyway. If you’re a Spotify or Google Play Music subscriber and you want to store music offline, the app’s size will grow considerably. If you use the G Pad III to take photos (though they won’t be of great quality), then those can add up, too. Moving photos and video to the microSD card is possible, so there is a saving grace there, but again, with less internal storage to work with, you do need to be careful.

Beyond that, the G Pad III functioned smoothly for me. For basic tasks like streaming video, web browsing and casual gaming, the device never really had a problem. Navigating the interface was easy enough, and bore similarities to LG smartphones, particularly with the lack of an app drawer and the way notification shortcuts work from the swipe-down pane above. 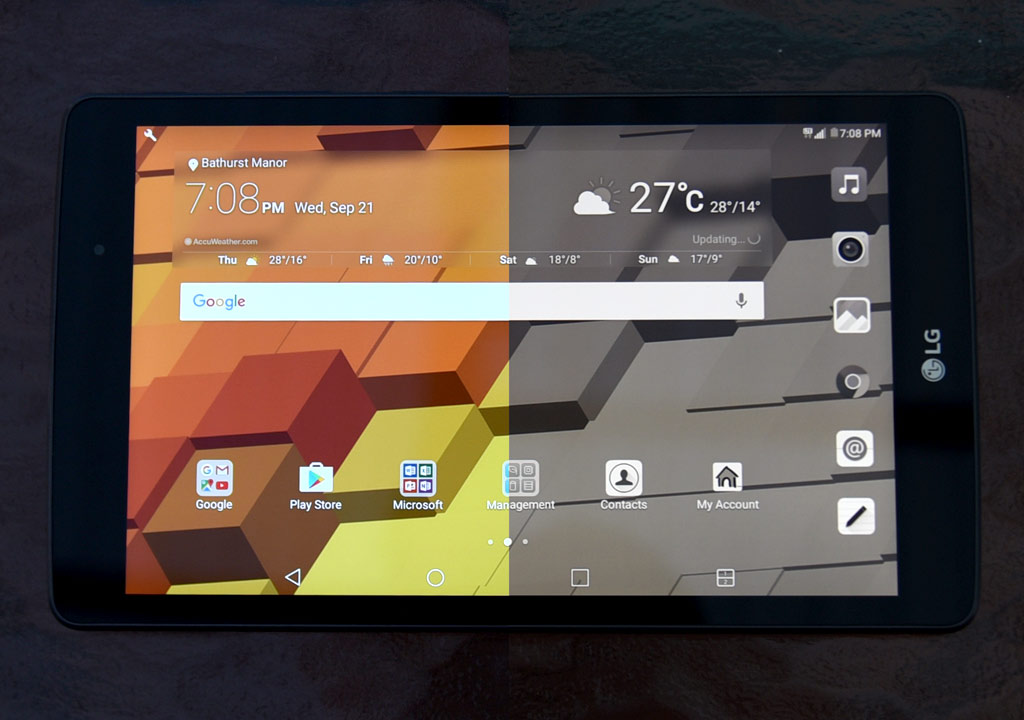 The “QuickButton” is not beholden to the reader mode, and can be changed in the settings to do something else, like quickly launching an app, for instance. I chose to keep it, as is, because I did find the monochrome tint to be more soothing to my eyes before sleep than a regular screen with reduced brightness.

It also pushed me toward utilizing reading apps, too. I’ve always preferred an eReader for reading eBooks because the E Ink displays they use are much better to look at for hours without feeling fatigue. While I don’t think I would try to last as long with the G Pad III, reading on it felt more like that when reader mode was on. Clearly, this was LG’s intention, but the fact remains that it’s a TFT display, and as good as the resolution is, text sharpness simply doesn’t match that of a good eReader.

That said, I viewed it as a bonus. Tablets are supposed to do multiple tasks, and the G Pad III does them. It isn’t adept at handling the most demanding games, but that’s okay. It’s an 8-inch tablet that works just fine in most circumstances.

About the USB port at the top: this is one of the more interesting additions I’ve seen in a tablet this size. It makes it inherently quick to transfer files over — like sharing music, movies and photos, for example. The cloud does make this less relevant, but this is an offline method that can surely come in handy.

LG doesn’t approximate battery life, but in my testing, I found between six-to-eight hours to be the norm. Naturally, the overall number depends on usage, and by killing the colours, reader mode can take less of the battery (though you still have to be careful with screen brightness).

That’s not bad for a tablet this size, but certainly not outstanding. To be able to go a full day at school or work with it is cutting it close, so I would consider this device purely on the merits of consuming content. Want to read eBooks and articles, browse the web, stream video and play the odd game or two? You should be fine doing those things.

I’ve pretty much already summed up what this tablet is about and who it’s for. If you feel like you fall under that camp, then you’re not likely to be disappointed. The LTE connectivity is nice, but not a necessity, unless you think otherwise. For what you get overall, this is good bang for the buck.