Best Buy Blog
Home TV & Audio wireless and bluetooth speakers Which type of wireless speaker is better for your home: WiFi or... Back when I was in university, I lived with a bunch of guys in a cheap apartment near the school. I remember our living room floor was crisscrossed with fraying and dirty, grey duct tape, because we had a pretty good sound system—with speakers all over the place—and we wanted to avoid having someone trip over one of the many wires snaking around the room.

Invariably, someone always did, though.

Fortunately, Wifi and Bluetooth speaker technology has done away with all of that, and now I can put speakers anywhere I want … no wires, no worries. Although, I still have to decide what type of wireless connection to use.

Does it matter if I choose WiFi or bluetooth sound?

Not all wireless technology is created equal, and the method with which your audio source communicates with the wireless speaker is going to determine the compatibility of your system, as well as its range of operation and the sound quality. What do I need?

Most wireless speaker systems communicate via either Bluetooth or WiFi, with Bluetooth being the most standard and universally compatible of the technologies. You’ve just got to ensure there’s a Bluetooth adapter on every device you want to connect to the speakers, and since virtually all portable devices like smartphones, tablets and laptops come equipped with Bluetooth; setup is usually a snap.  WiFi, on the other hand, is almost as ubiquitous as Bluetooth, but not quite. You’re going to need wireless adaptors on all the devices in your network, and you’ll need a wireless router or wireless access point just to use WiFi. But today that shouldn’t be a problem, as most smartphones, tablets and laptops do have WiFi onboard.  And most of us already have our homes equipped with a wifi router.

So which Is better?

WiFi is almost as standard a technology as Bluetooth. However, setting up speakers on the latter is a bit easier and takes fewer steps than connecting by WiFi. Setting up a WiFi-based system can sometimes be tricky. For example, you might need to enter a security password, unless you’ve got WPS (Wi-Fi Protected Setup) speakers and router. Most people find that Bluetooth is easier to use. There are two main drawbacks to Bluetooth, though. The first is that it generally has a limited range: it often workds great for a single room or small apartment, but its signal is not able to as much area as WiFi, which can provide a strong signal through an entire house. WiFi also tends to offer a noticeably higher sound fidelity than Bluetooth. That’s a really important consideration if, like me, you need to have really crystal clear and solid sound pumping out of your speakers. That’s not to say there aren’t some exceptions to these general rules-of-thumb. Bluetooth technology keeps improving. for example, brands like Bose (a top name in audio technology) offer a large and versatile selection of Bluetooth devices from which to choose. Many people like the great sound, colourful options and small portable size of the Bose Soundlink series of speakers.

And WiFi technology keeps getting easier to use too.  You won’t need a masters degree in engineering or to invite one of the guys from The Big Bang Theory to set up some of the newest brands of WiFi speaker. For example, the Sonos Play: 1, whose installation via an app is “simple as can be,” according to Tom Brauser who had a chance to test these speakers for the Plug-in Blog.

Best of Both Worlds Of course, if you’d rather not make a choice at all, then some speakers, like the Samsung Shape, are even capable of transmitting your music by both Bluetooth and WiFi. But, as always, there are still compromises with any setup. The Shape, for example, doesn’t support the plethora of streaming services that the Sonos or Bose offers, like Spotify and Pandora at this time, though that may change in the future.

In the end, making the right choice for your home, or office depends on how you stream your music, where you want it streamed, and how comfortable you are fiddling with settings and the technology. Personally, I’m more partial to WiFi, with its better sound and greater range. I’ve never minded having to play around with settings and passwords to make something work. But, you could always just kick it old school, as many wireless speakers have a wired input as well, meaning you can connect a music player that doesn’t have Bluetooth or WiFi. Just be ready with some duct tape.

What is your preference? 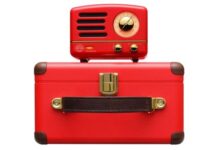