Chances are unless you’ve been living under a rock these past few months, you’ve seen at least one ad for Dropcam. Dropcam’s had one of the most clever marketing campaigns of any electronic I remember in quite a while. You’ve probably heard the radio ads, or if you listen to some of your local radio stations, they’re sponsored now by Dropcam. For example, the Team 1040 in Vancouver keeps a Dropcam in the recording studio that they use to crack jokes about what the hosts are doing or up to. Dropcam is everywhere, and now it’s at Best Buy.

So what is Dropcam exactly? The simple description on the box sums it up. It’s Wi-Fi Video Monitoring. The box goes on to state that it’s for home, baby, pets or business. Really, it’s for any purpose. You can set it up to keep an eye on anything. Curious about what your cat is destroying in the middle of the night? You can set Dropcam up in your living room to keep an eye on that. Wondering whose cat is coming and pooping in your rose bushes? You can set Dropcam up at the closest window to keep an eye on that. You don’t even have to be watching live. Optional cloud storage options mean you can go back to the footage later on to find out that Fluffy is finding his way into the catnip drawer every night and throwing a party for himself.

I wonder if the Dropcam itself probably gets its name from its shape and size, or its functionality (the fact that you can “drop” videos into Cloud Storage the way you can.) It’s the smallest camera of its type that I’ve ever seen, or basically, just a drop of water in the bucket. It’s about the circumference of a camera lens, and only a couple of inches high. It sits on a small metal base where it clips into. Getting started with Dropcam is a breeze

Ease of Setup: The total elapsed time to get your Dropcam set up is going to be less than 5 minutes. All you need to do is plug the Dropcam into your computer via USB, and follow the directions on screen to install for either a PC or Mac. You’ll be prompted to create an account and access your Wifi network, and then Dropcam sets up the rest up. You’ll then be asked to disconnect your camera, station it where you want and then return to your PC to learn how the recording works.

Ease of Use and Storage: On your PC, looking back and grabbing snippets of previous video footage is a snap. It’s as simple as navigating the menu below the live feed and drawing back to what was recorded before you sat down. Be aware when you set this up that Dropcam does not have local long-term storage available. However, if you enable Cloud storage and purchase the applicable subscriptions, you can store up to 720 hours of footage depending on the package you buy. That’s exactly 30 days!  Video on the basic Dropcam is available in 720p.  The Dropcam Pro is also available at additional cost and can stream up to 1080p.

The Dropcam has automatic night vision as well, similar to other camera in its class.  There are around a dozen LEDs around the perimeter of the camera lens that work to support this functionality and broadcast to you as clearly as possible.  I found the Night Vision on the Dropcam to be pretty good and pretty clear in a whole, considering that you often run into really poor quality feeds when the lights are off.

If you are concerned about the privacy of your footage, that it could get into the wrong hands or even about rights ownership, Dropcam states on their website that they employ bank level security and that by default, your video belongs to you.

Easy App Setup: Let’s face it. In today’s day and age, our interests lay more in accessibility, and how simple it is to get quick access to what we want. Luckily, the comprehensive app for your iOS or Android devices make accessing all of your Dropcam information a snap, and gives you quick access to the two-way microphone on it too. You can access your video feed live, and then play with it as well. Check out my poor startled cat when he realized Dropcam was following him in the living room. Sorry Desmond. I couldn’t resist.

Low Latency Times: We haven’t perfected the art of realtime latency across all devices, but we’re getting close. On a PC and on the app, I found video lag to be only 3 seconds behind the live broadcast, and on the two-way mic, I found the delay to be only 2 seconds behind. That’s great all things considered.

A flexible device: Dropcam is just a smart tool to have around. You can pretty well turn the device on and off as you

please (and schedule it too,) can zoom in and out, and can view in a great range of motion (approximately 110 degrees.) Should you decide to do a permanent mount, your Dropcam also comes with a clip on/off wall mount with the included screws and drywall anchors. If not, rubber feet at the bottom of the base mean you can sit it anywhere without fear of movement or sliding. Lastly, Dropcam can send you motion notifications if need be (if you’re away from home, for example, movements can be tracked if anybody is in the house.)

Keep in mind, however, that this is strictly an indoor device. I had mentioned above that you could use it to peer outside at doing things like finding out who is rooting through your garbage, but it has to be kept indoors. Dropcam ideally works in temperatures of 0 to 35 degrees celsius, and does run a bit hot if using some of it’s more resource heavy applications.

Since you’re also being pushed a lot of data through the app, you’ll probably find that it sucks up a lot of your phone’s battery too. As comparison, on my phone (an iPhone 4S,) I found that battery was being zapped at approximately 1% for every 45 seconds to a minute I had the app up. That’s harsh, but to be expected I suppose. You should also be aware that you probably don’t want to station your Dropcam near your PC or where you’ll be accessing the information. Since it’s picking up on your sound at all corners, you run very easily into creating sound static and feedback loops if you’re constantly working or doing anything next to it.

I demo’d some of the features of the Dropcam in comparison to my 2 way baby monitor, which also claims to offer a lot of the local features this does. On all aspects, the Dropcam was far superior outside of sound latency, though that wasn’t a big deal. The night vision had a far better picture, the cam with the lights on had better color picture, and there wasn’t any constant static feedback like with the monitor. This is definitely something I would use to monitor baby’s sleep for sure, especially since my phone would be the receiver and would defeat the purpose of carrying another device around the house.

It doesn’t have to be a sleep monitor either, however. I used to do a lot of overseas business travel before I was married, and can only imagine now that with a family, there would be a lot of separation anxiety. Dropcam would allow my family and I to communicate in realtime, or even for my wife to capture any special moments I might miss and we could save them for later without her having to drag a camera around in all corners. We could simply bring up the Dropcam video and save it for a rainy day.

Then, of course, I could use the two way microphone to lecture Desmond for yowling around the house in the middle of the night too right?

Desmond doesn’t appreciate Dropcam as much as I do

Need a demo? If you need more visual proof of how Dropcam works, and how business are using it, you can get demos direct from the Dropcam website, or through the app. A lot of featured business and locations have cams set up showing you how they use it. They say a picture’s worth a thousand words, and even though I’ve spent that much talking about how neat this camera is, perhaps that visual proof will push it over the top.

Dropcam is now available at Best Buy and BestBuy.ca. 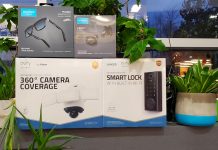 Enter for a chance to win Anker smart home and smart audio tech. 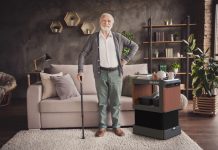 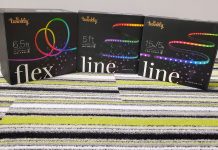