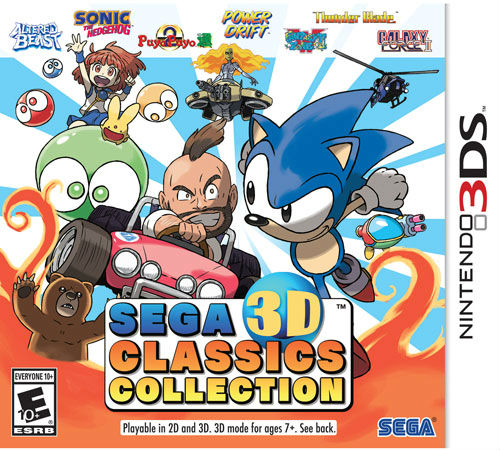 It’s been fifteen years since SEGA became a third-party software publisher, but even today seeing the company’s iconic mascot, Sonic the Hedgehog, on Nintendo platforms I’m reminded of their legendary 80’s and 90’s rivalry. Back in those days, most of us were either a SEGA gamer or a Nintendo gamer, and particularly if you’re in the latter group you may not have played (or even heard of) some of the old school gems contained in the new SEGA 3D Classics Collection for Nintendo 3DS.

This collection of 9 classics from SEGA’s golden era of arcade and home console gaming defined their respective genres and played pivotal roles in shaping the video game industry as we know it today. On the surface, it may seem like this is yet one more retro compilation of many we’ve seen lately, however that couldn’t be further from the truth. The developers at M2 have painstakingly recreated each game in stunning full stereoscopic 3D, and have added tons of bonus features and goodies to give you brand new ways to play these cherished classics. 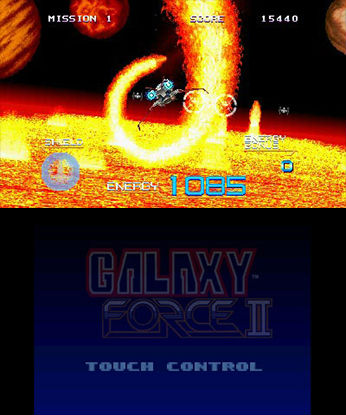 Not your typical retro collection

In recent years, retro collections have tended to come two different varieties: those that include a huge library of well-known classics, like Rare Replay (30 games) and Sonic’s Ultimate Genesis Collection (over 40 games), or franchise-focused packages containing a modest number of games, such as Mega Man Legacy Collection and Resident Evil Origins Collection. The SEGA 3D Classics Collection eschews both of these tried and true formulas and tries something completely new: offering 9 classic SEGA games from a variety of platforms—SEGA Master System, SEGA Genesis, SEGA Mega Drive, and SEGA arcades—including popular hits, golden oldies you may have missed, and a pair of games that have never released outside Japan. 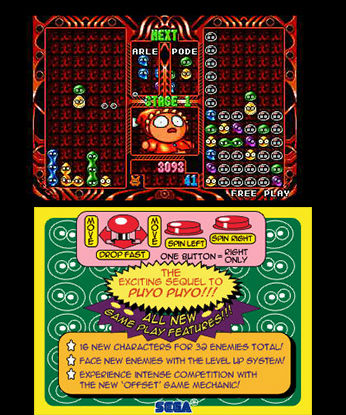 As mentioned, impressive stereoscopic 3D effects have also been added to all these titles. Some of the SEGA arcade games in the collection were originally developed using sprite-scaling technology to simulate 3D effects, but now on Nintendo 3DS they’re presented in true 3D for an even more immersive experience. To ensure the best visual pop and smoothest gameplay possible for the Genesis and Mega Drive games, SEGA and M2’s emulation teams developed their own “virtual console,” called the GigaDrive, which taps into the full 3D processing power of the 3DS hardware. It’s worth noting too that all nine included games are more than just simple 3DS ports, with each being completely deconstructed original versions rebuilt with stunning new graphics, modes, and features. Now that’s dedication.

The game I was most excited to try first was Puyo Puyo Tsu, the second installment of the popular action-puzzle series, and its first release internationally. I fell in love with this franchise way back in the SEGA Genesis/Super NES era, but back then the North American versions were remodeled with more marketable characters in games like Dr. Robotnik’s Mean Bean Machine and Kirby’s Avalanche. The version of Puyo Puyo Tsu included here is the 1994 original Japanese arcade game where you face off against increasing challenging (and adorable) minions as you battle your way up a six-level tower. If you’re familiar with puzzle games like Dr. Mario or Tetris, you’ll feel right at home here as you match four or more coloured Puyo to remove them from the playing area. Not only is the game extremely fun—perhaps the best in the whole collection—but it’s also one of two included games that supports Local Play (each person must own the game.) 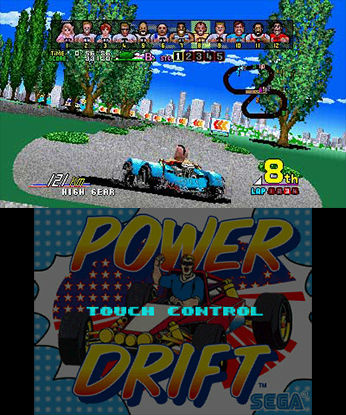 Power Drift is another classic arcade game in the SEGA 3D Classics Collection that is getting its very first international release. This hyper fast kart racer from famed Japanese game designer Yu Suzuki was first released in arcades in 1988, and uses similar pseudo-3D graphical effects seen in mega hits like Space Harrier, Outrun, and After Burner. This game is notable for its exciting track designs featuring steep climbs, dips, and hairpin bends, all driven at breakneck speeds. I was amazed at the incredible visual effects in Power Drift, particularly the eye-popping 3D effects that are not only the best in the whole collection, but among the greatest I’ve seen on 3DS yet.

I was also extremely impressed with the many options to replicate the arcade experience, including a retro screen, moving HUD, and optional environmental SFX, all used to accurately simulate the sights, movements, and sounds of the actual arcade cabinet. The only drawback with the full arcade experience is that can get dizzying after a few races, so if you go this route it’s best to take periodic breaks. Overall, an extremely fun racing game, and great addition to the collection. 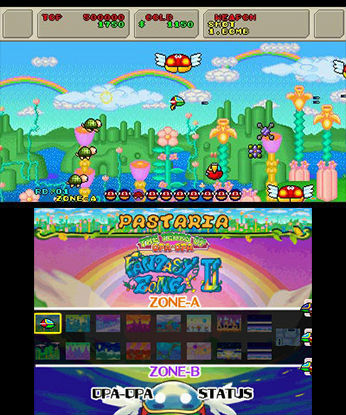 The SEGA 3D Classics Collection also includes three more arcade games previously released in the Nintendo eShop under SEGA’s 3D Classics line: Fantasy Zone II W, Galaxy Force II, and Thunder Blade. Of the trio, the sci-fi rail shooter Galaxy Force II is my favourite for its exceptional graphics, intense flying combat, and steep challenge. In the game you take control of a TRX-5 Quasar interstellar fighter-ship and battle your way through wave after wave of Halcyon enemy fighters across five distinct worlds. You begin flight with a set Energy meter that counts down as you fly and take damage until it reaches zero, at which point it’s game over. However, at specific checkpoints you can reclaim energy depending on how many enemies you’ve destroyed up to that point. Your depleting energy meter means every second and every shot matters, making this an ideal game for those who enjoy fast-paced arcade thrill rides where precision counts.

For fans of side-scrolling shoot ’em ups, Fantasy Zone II W will give you your fix. This so-called “cute ’em up” for its bright colours and playful esthetics is an arcade port of the SEGA Master System classic, releasing in Japan in 1988. It’s a lot of fun to blast enemies, collect coins, and power-up your ship in the traditional Story mode, though I much preferred the all-new endless mode, entitled Fantasy Zone II: Link Loop Land. This infinite score-based mode challenges you to defeat continuous waves of enemies while collecting coins to fill up your LINK Gauge for a huge score multiplier. If you’ve played the endless modes in shooters like Super Stardust HD or Geometry Wars, the gameplay here is just as addictive.

Finally, Thunder Blade is a helicopter shooting game most notable for its blend of top-down and behind-the-vehicle perspectives. The visuals are again quite immersive, with environments possessing a nice 3D pop, in addition to superb 3D effects when waves of enemy planes swoop in for attack, firing shots that appear as though they’re jumping out from your screen. While I enjoyed playing through the four stages, it’s a rather short game that hasn’t aged all too well, so for me the replay value was limited. 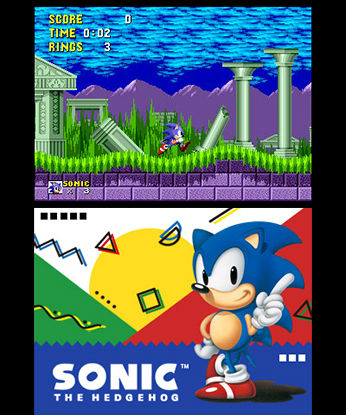 A pair of SEGA Genesis classics

What would a SEGA retro collection be without an obligatory Sonic the Hedgehog game? Included here is the original Sonic masterpiece, a game that has appeared on nearly every gaming platform imaginable and one you’ve likely played before. Still, having a version of Sonic the Hedgehog to play on-the-go is a major plus, especially when it includes features like Sonic’s Spin Dash (a move we take for granted these days but wasn’t in the original), and beautiful 3D effects that give a nice depth to Green Hill Zone and the following worlds you visit.

Altered Beast is the second Genesis game included, and again it’s one you’ve likely seen or played before on many other gaming platforms. This classic side-scrolling beat ’em up places you in the role of a Greek centurion who rises from his grave and transforms into multiple powerful beasts to take down an evil Underworld demon god. I had a blast with this game back in the day, but I found its simplistic gameplay and short game length (it can be completed in about 15 minutes) doesn’t hold up very well compared to today’s standards. You can play this game co-operatively with a friend via Local Play, which is a neat addition, but with the game being so short you’re unlikely to get heavy multiplayer mileage out of this one. Like Thunder Blade, this was a nostalgic game to revisit, but I don’t expect I’ll go back for more.

Rounding out the SEGA 3D Classics Collection are two classic Master System games, Maze Walker and Fantasy Zone II: The Tears of Opa-Opa. As the name implies, Maze Walker focuses on maze exploration with a top-down view similar to Gauntlet. This game was originally created using the SegaScope 3D glasses back in 1987, making it one of the earliest 3D games ever made. Given that it was made nearly 30 years ago, don’t expect much in the graphics department, but at least the varying heights in the mazes look great in 3D. If you like old-school scrolling maze games, you’ll find Maze Walker to be more entertaining than its generic name would imply.

The last game in collection, Fantasy Zone II: The Tears of Opa-Opa, was the follow-up to the original Fantasy Zone title, released in 1987 on the SEGA Master System. It’s the console version of Fantasy Zone II W, the arcade shoot ’em up also included in the collection, and as you might expect, it’s graphically worse. It’s hard to justify why this game was included considering how much more vibrant and lively the arcade port is, though it was interesting to compare the two versions and see just how improved the arcade port is. 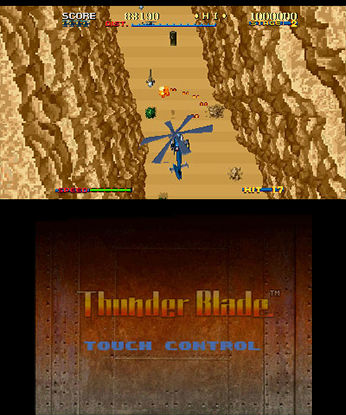 The SEGA 3D Classics Collection offers technically perfect ports of some genuinely classic arcade and home console games that helped define their respective genres. M2 did a phenomenal job adding immeresive 3D stereoscopic effects to these classics, and the wealth of extra features gives you fresh new ways to play them. Some of the included games didn’t hold my interest for long, such as Altered Beast and the Master System version of Fantasy Zone II, but there are enough stand-out titles in the mix to keep you playing for a long time to come. Two of these highlights—Puyo Puyu Tsu and Power Drift—are getting their first international release and are enough to recommend this collection on their own.

If you were a Nintendo gamer growing up, you owe it to yourself to check out these great, classic games made by SEGA. Retro fans, or those who love a challenge should also take a look at what the SEGA 3D Classics Collection has to offer.

+ Diverse selection of retro games across platforms and genres

– No online play and limited co-op