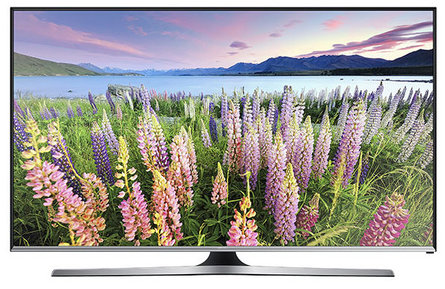 You may be thinking, “do I really need a new TV right now?” I was when Samsung’s new smart Tizen-OS-powered TV came to my door for testing. The TV in my family room is only about 6 years old, and it works wonderfully, so I wasn’t thinking I was in the market for a new one. So this one caught me off guard. 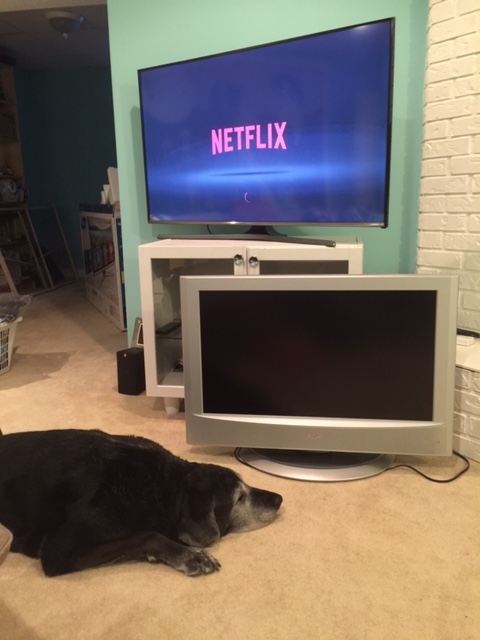 The Samsung J5500 smart TV is a stunner right out of the box, particularly when compared to my old one. I don’t think it’s wrong to consider looks when you’re picking a new TV. After all, it’s a piece of furniture that sits front and centre in a very busy room (or rooms) in the home. You’ll be starting at it whether it’s on or off, so better you like the looks of it.

Right away this TV (I sampled a 50″ model) looks fantastic in my room. It’s slim and sleek with nearly no frame around the screen, very much unlike the current TV in my home (even my dog was ashamed of how bad the old TV looks next to the Samsung).  The 50 inch size is neither too big nor too small, and can fill up your field of vision, while not overpowering the space.

The Samsung J5500 not a particularly heavy TV, but it did take two of us to get it properly set up on its stand. It integrates beautifully into the room, and would easily fit on several walls in my house, without looking bulky or obvious.
Set up

The TV was extremely easy to set up right out of the box. It was as simple as plugging it in and turning it on and the smart function menu came up immediately, allowing me access to several streaming services right away.

The streaming menu runs along the bottom of the screen, and I found it a good size to allow me to surf, while not blocking the picture. That style of menu, while nothing like what some Roku or Apple users may be accustomed to (with those you get a full screen menu) worked just fine, and is actually similar to what other smart TVs do too.

Video picture
With the TV set up and ready, my husband and I checked out a few episodes of the new Netflix series Narcos on the new Samsung 5500 smart TV. The picture is super clean and crisp and so realistically lifelike. Compared to this brand-new Samsung, my old TV seems as though I should be watching an episode of The Fresh Prince of Bel Aire instead. 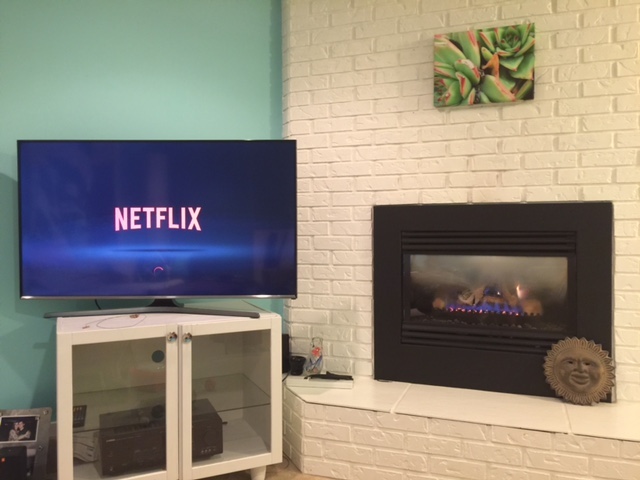 Even using the basic factory settings out of the box, the colours are sharp and detailed, the contrast is great and overall the picture is pretty spectacular.
As Samsung tells it on the corporate website, “using an advanced picture quality improvement algorithm, Samsung’s Wide Colour Enhancer drastically improves the quality of any image and uncovers hidden details.”

Remote and app
If there’s one thing I don’t like about the Samsung 5500 it’s the remote control. A bizarre half circle shape, it’s long, bulky, and the layout of the buttons doesn’t make much sense, particularly because my hand only reaches about halfway up the remote. Plus, when smart TV manufacturers are finding a way to include a keyboard on their remotes (VIZIO, I’m looking at you!)  to help you with inputting all those lengthy passwords and email addresses to log into digital services, it makes me wonder why everyone is not doing that.

Perhaps it’s because there’s an app for that. Though it’s not spelled out in the tiny instruction booklet included with the TV, Samsung does make an app for its smart TVs.

The app was super easy to set up. There was no fussing back-and-forth with connections between Wi-Fi or Bluetooth. As soon as the app loaded it located the TV and then popped up a pin number on the screen, which instantly connected the two devices. From there, I was able to play my photos and music on the TV screen as well as gain full control of the set. Samsung says I can even watch TV on my phone, but admittedly I do not have cable, so I was unable to test out this feature, however it’s something I’m pretty excited about, since it reminds me a bit of the way the Slingbox operates)

One annoyance with the app; when my husband and I switched between our phones to control the TV, we each had to reset the app and input a new pin number for it to work again.  Having Samsung add multi-phone functionality would be nice going forward.

While the user interface of the app is nothing pretty, it’s basic and easy to use and understand.  As an aside, I also discovered Samsung makes a wireless keyboard for this TV too (available separately for about $99)

Smart Functions
The Samsung J5500 has several “channels” built in; Netflix and YouTube are the two most prominent, but also in the tray are streaming options like Crave TV, TSN>Go, H&H Television, and Cineplex Store. I watched a few videos on the House & Home channel and really liked that content, and the easy to navigate interface.  But I digress.

The user interface also has a Web browser, which was absolutely useless without the app (or the add-on keyboard) since trying to input words and URLs with the letter-at-a-time on-screen keypad via the remote would be an exercise in insanity. 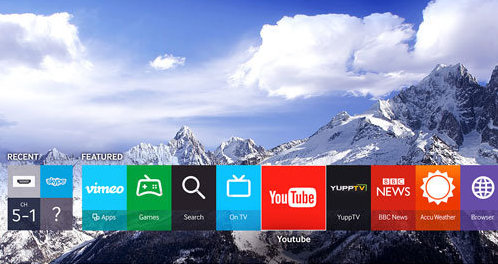 The smart menu and functions, such as switching among the different streaming options was quick and easy, which Samsung attributes to its Quad Core processor. According to the company; “your Samsung Smart TV offers enhanced performance. You’ll notice the difference straight away, with faster multitasking and switching between content and web browsing, as well as smoother interaction.”

Overall
I wasn’t expecting to be impressed by a TV, but this Samsung really did it for me.  It’s easy to set up and use, the picture is gorgeous and the smart functions make it very versatile for the way today’s families are consuming media. While I think it could use a few more streaming channel options, it definitely has the big two covered, so hopefully more will come online eventually. Overall a very impressive experience. One that now has me (and the dog) giving the stinkeye to my old TV.

Get the Samsung J5500 smart TV ONLY at Best Buy