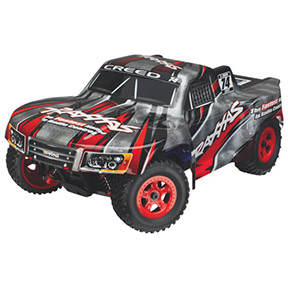 A powerful, easy to use, fun on four wheels play session virtually out of the box, if your “RC vehicle” experience has been limited to the generic box toy store specials until this point, allow me to introduce you to the Traxxas Latrax SST. Designed by people who are really into RC, the passion and engineering that go into one of these units is obvious when you lay eyes on it. What happens when you pull it out of the box and fire it up is something else again. A ton of fun in one burly 1/18th scale package, this RC Stadium truck is a little engine that most certainly can.

For those unfamiliar with the Traxxas and Latrax brand names, their slogan is “The fastest name in radio control” which should give you the right idea. A hobby that is populated by some very passionate enthusiasts, that’s probably a very accurate way to describe the folks designing these vehicles; they clearly care about what they do. Well considered, designed and developed from the ground up, these are serious machines that go beyond any mere “toy.”

What’s the difference? Engineering and raw power. A Traxxas  powered RC vehicle bears as much resemblance to the generic toy store variety, as 4 door sedan does to a Baja truck. From top to bottom these cars are made with high end components designed to be durable in order to navigate some rough and varied terrain at high rates of speed. It’s not just empty words and nerd-like enthusiasm either, as well as a full range of truly high performance vehicles that will surprise you with their sophistication, Traxxas backs its products. Along with community forums filled with helpful people, their support page have manuals, parts lists, faqs, ‘by model’ unit specific product support, and even actual human beings you can talk to, either by phone or email.

Understandably this level of design, engineering and high class construction can come at a cost. As a result some of the Traxxas models can be a bit of investment, which is where the LaTrax line comes in. Home of the 1/18th scale models (which is more in keeping with your standard sized RC vehicles), Latrax is built with the same principals in mind, including the world class support, but at a price range that makes it more accessible to the everyday fan. Designed to be priced under $200, a Latrax unit isn’t inconsequential pricewise, but it doesn’t take long to understand where the money is going, and that it’s well spent. 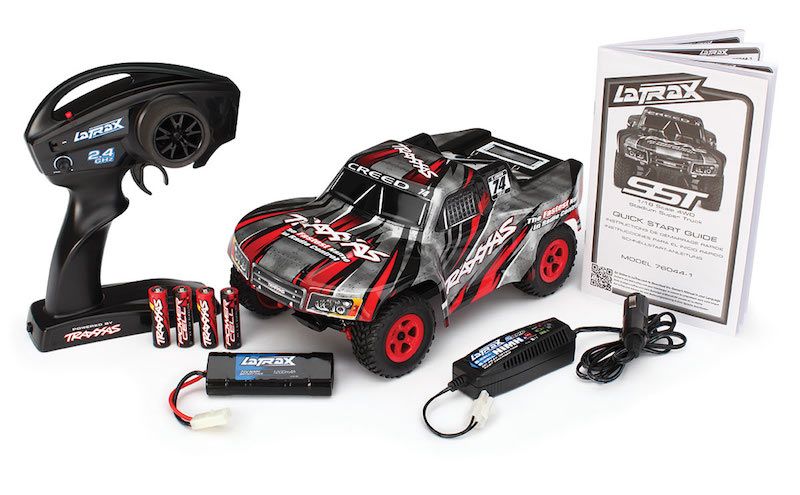 Out of the Box Experience

With the Latrax SST, getting from the opened box, to the very first moment I was having fun and enjoying the SST as it was intended was short and straight line. In my previous experiences, the power source (ie battery, charging it, knowing when it was charged, etc etc) was a source of some frustration, not so here. Though I understand the whole Traxxas battery system is getting an upgrade, the SST comes packaged with a 7.2v Nimh (Nickel-Metal Hydride) and a 2amp DC peak detecting fast charger. Easy enough to use, the display flashes red when it needs a charge, flashes green when its charging, and holds a steady green when it’s done. The charge took an hour or so, which is certainly reasonable, my only beef being the required power supply. Built to charge of the aux setting of your car’s power source (like, actual car, internal combustion engine car) that means it has to plug into the cigarette lighter of the vehicle, with the key in, turned to aux (so, the radio is playing, power is on, but you haven’t actually turned the car over). While I’m sure there’s a perfectly good reason for this, it does present a minor inconvenience. Most people can get access to a car with a cigarette lighter, everyone can get to a wall socket. Regardless, charging the main unit was simple enough, and the Radio Control (the thing you steer with) is powered by 4 double A batteries which came included in the packaging. Once both halves where properly powered, it was a matter of getting the two synced up, this is easily done as the control has a red ‘set’ button, and bam, the two are communicating. Now it’s time to see what sort of trouble you get into.

I got to play with a Latrax Teton, as well as an E-revo and E-Maxx so I shouldn’t be surprised by what they’re capable of, but still. It’s probably my experience with the usual sort of RC vehicles my son gets, very cool looking cars that do very well over short distances, provided they’re relatively level and smooth. Driving the SST where I did, as fast as I did, into some of the things I did, sort of felt like I was getting away with something. That feeling like you’re sure a grown up is going to come around the corner any moment and ask you what you think you’re doing. Most toys have “acceptable operating conditions” I suppose; it’s just that the SST and the rest of its family were developed with some nastier ones in mind. With its 4 wheel drive, each with independent suspension, and a water resistant power source, the Traxxas site not only suggests, but encourages use in all elements, and that’s mud, water, and even snow. While I couldn’t find any of the white stuff to try it in, it easily handled the muck. Gravel, brush, tall grass, variable terrain, honestly, save for actual physical obstacles (trees, bricks, rock) or anything without a sort of gradient, the SST took to it aggressively. What it couldn’t handle, well, it was easy to flip over and always ready for more. Gradients of more than 35-40 degrees were a bit of a problem, but all in all, this really is an all-terrain vehicle, and tough enough, as well as easy enough to operate that my 6 year old had a fantastic time with it. I’d say the battery held enough power for a half hours rigorous use, and any serious owner would be well recommended to double up, and buy a second battery pack. With that in mind, it would be fairly simple for a consumer to get themselves an hour’s fun at a relatively small investment, which is a pretty good ratio in my experience. 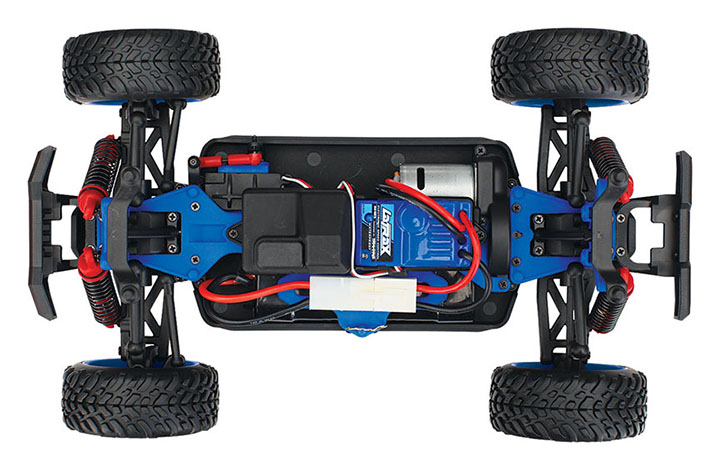 One of the big selling points with the Traxxas brand of RC vehicle is the depths of mod-ability available to those so inclined. These are open source vehicles, meaning, while they are great out of the box, it’s only a starting point, with a wide range of swappable parts, and a very big world of aftermarket add-ons you can go as far down this rabbit hole as you choose. The mod component is certainly more obvious the higher scale units, but is completely accessible even with Latrax level models. A quick glance at the available parts will show you, the sky is the limit. Whether because you’re pushing performance and speed levels, or you just need to swap out a part after a rigorous drive session, as I read on a forum once, ‘a broken part is just a chance to upgrade’.

If I seem overly impressed by this unit or Traxxas in general, it’s because I am. Maybe it’s the “disposable fun” generation I belong to, or, having had my expectations battered down by some of the “less than” experiences I’ve had as a consumer, but these folks have it right. Built with standards in mind, and the experience of the consumer above all, it shows in the end result. A tough little truck that is good for a great deal of fun straight out of the box, the Latrax SST can be a gateway into a wide world of hobby. From the terrain it can cross, to the open source nature of the products, to the engaged community and customer support, if you’re even casually interested in the RC world, there’s a lot of good reasons to start with LaTrax, powered by Traxxas.