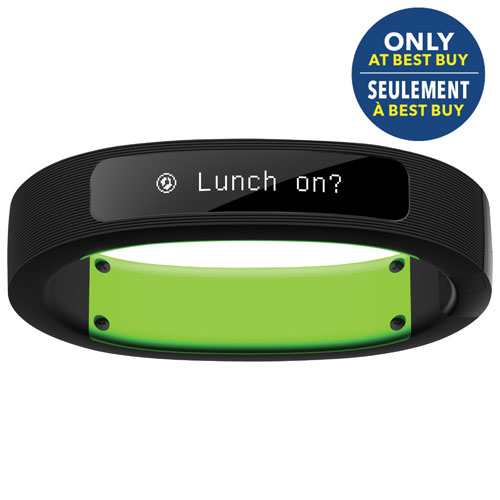 When it comes to health and fitness, my regime varies throughout the year. Sometimes I’m completely dedicated to clean eating and breaking a sweat at least once a day. Other times, my hectic schedule gets in the way and those healthy habits are replaced by stretches of time away from the gym and a diet filled with plenty of carbs and loads of cheese. Needless to say, when those unhealthy stretches go on for any extended period of time, my pants get a little tighter around the waistline and I’m (happily) forced to revert back to the healthier version of myself. But making that transition can sometimes be tough without a little motivation.

Right now I am in one of my unhealthy stretches, which is why I was super excited to try out the Razer Nabu Smartband. Dubbed a hybrid wearable fitness tracker and smart watch, the Razer Nabu is a slim black wristband that combines basic fitness tracking features–like steps taken, calories burned, distance traveled, and time active–with an OLED screen that displays all the notifications that come to your phone. I wore the Nabu almost constantly for a week. Some things I loved, others not so much. 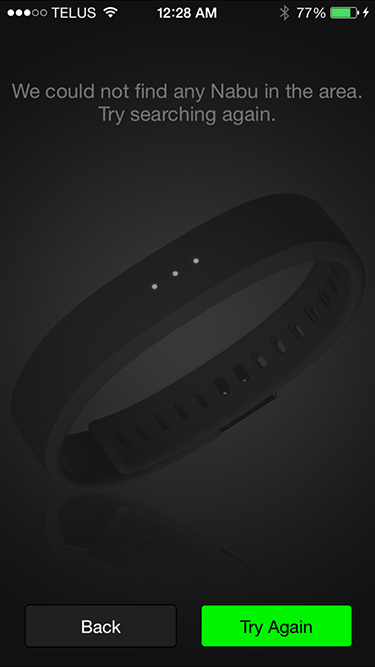 Setting up the Razer Nabu Smartband so I could actually wear it and use it was an exceptionally frustrating experience. After connecting the Nabu to my laptop via the included cable and waiting for it to charge, I was ready to download the Nabu App and get started on my path to better health. Seems simple, right? Yeah, not so much. I opened the iTunes app store on my phone and entered “Razer Nabu” in the search box. Two apps popped up, neither of which featured the same app icon as was illustrated in the Nabu instruction manual. While I found this odd, I just made the assumption that the app had been updated or the graphic had changed, and clicked “Get.”

Once the app had downloaded, it was time to pair my Nabu with my phone. I clicked the “Find Nabu” button, but the app could not find my device—even when it was two inches away. After about an hour of frustration, followed by three hours of searching for a solution online as to why my Nabu wouldn’t synch, I broke down and contacted the Nabu support team via email. They were very quick to respond, but their solution was for me to turn off the device and try again. That did not work.

At this point I was confident that I had a defective device. But then it crossed my mind that maybe I hadn’t downloaded the correct app, so went back onto iTunes, and not only did the Nabu app I had previously downloaded not appear in my search, but the app with the same icon as featured in the instruction manual popped up right away. Weird? Absolutely. After I downloaded the “correct” app I was in business. It found my Nabu right away and led me through a very easy set up process where I entered my email, weight, height, number of steps I’d like to walk in a day, and gender. 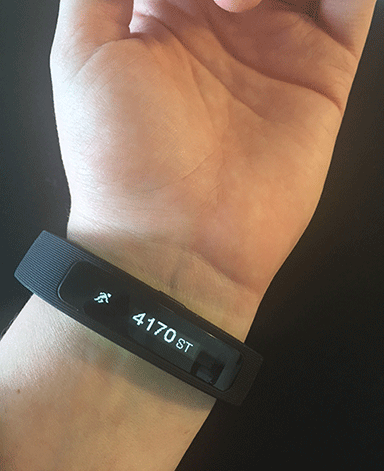 With the correct app downloaded and my Nabu synched to it, it was time to clip it to my wrist and go about my daily activities. Unlike other fitness trackers out there, the Nabu is meant to be worn with the OLED screen on the underside of your wrist, which I found to be a great feature, especially when I was getting notifications from my phone that I didn’t necessarily want the general public to be able to see.

I found the Nabu very comfortable to wear on my left wrist, but when I switched to my right, it was really a hindrance to my work, which makes sense since I am right handed. When on my right it interfered with using my mouse and my handwriting was beyond atrocious. So on the left it stayed.

I’ve never tracked my steps before, but have heard many people say that a 10,000 step per day goal is reasonable. Well, let me tell you, it’s tough! But having the ability to check in at any given time of the day to see where I stood against my goal was enough for me to decide to either go to the gym, walk home from work, or even just wander down to the grocery store instead of driving just so I could increase my daily steps. In seven days, I hit my goal of 10,000 steps twice; and both times I went to a dance class in the evening. 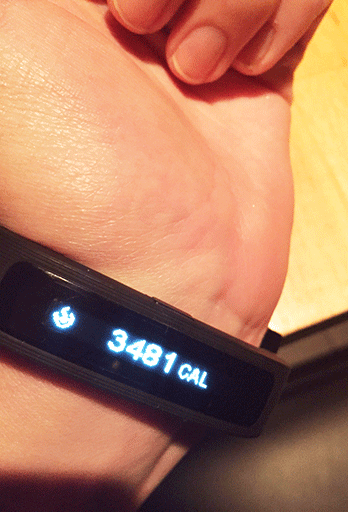 I also loved the fact that the Nabu tracked my calorie exertion. There are a number of apps out there that allow you to enter your calories consumed, but just estimate your daily expenditure. Getting an accurate read of how many calories you burn in a given day is pretty eye opening. For instance, I’ve always assumed that I burn about 250 calories during the dance class I take twice a week. Well, according to the Nabu, I burn a little more than 500 in each one hour session, which is a big difference! 250 calories is two glasses of wine!

I also liked the fact that the Nabu sent me alerts and notifications from my phone with a subtle vibration. I didn’t think this would be a big deal, but when you’re sitting at your desk, driving your car, or having a drink with friends, you can see what’s up in an unobtrusive way. That said, when you get an alert, it scrolls across the OLED screen like a digital ad in Times Square, and when you happen to be signed up to an online dating site and an alert like “BigBoy79 wants to meet you” scrolls across your wrist, well, regardless of whether or not the display is facing in or out, it’s not something you want anyone else to see. 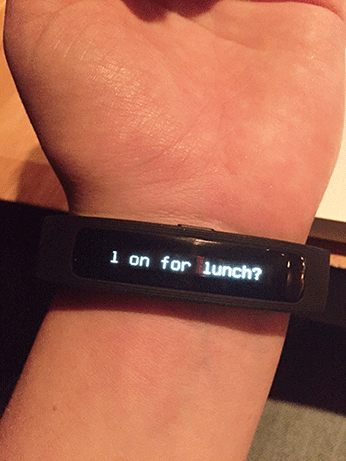 While I really valued the fact that the Nabu tracked my steps and my daily caloric expenditure, there were a couple of things that I really did not like, outside of the Times Square ticker tape scrolling. First, over the span of a week, according to my Nabu I averaged about 3 minutes of activity a day, even when taking an hour-long dance class, so I’m not sure what that was about. I also struggled with the sleep tracking function. First of all, you have to say when your “sleep” starts, which is just crazy talk to me. I mean, I will sometimes go to “sleep” at 11, but it will take me 2 hours to actually turn off. To tell a device “yup, I’m sleeping now” is somewhat counter-intuitive to me. Shouldn’t it be able to tell with my heart rate? Regardless, according to the Nabu, I had 0 hours sleep in a week. I mean, I’m a little tired today, but c’mon, that’s just not right!

The other thing that really annoyed me was that the OLED display comes on whenever you move your arm. I started to get used to that during the day, but at night when you’re fidgeting in bed and the OLED comes on, it’s like being blinded by the light of a thousand suns, so not really conducive to a good night’s sleep!

As it turns out, there are actually two Nabu apps you are supposed to download to get the most out of your device. However, this was not made clear in the instructions at all. The second app is where you can apparently change the settings so you don’t get blinded at night by the OLED screen, can choose what alerts come through to the device (i.e. no online dating messages), set goals and an assortment of other functionality. However, that app does not work with the current version of the Nabu app, so I was not able to customize my device the way I should have been.

Like any wearable technology, I think there’s a bit of a learning curve involved. While I did wear the Razer Nabu Smartband almost solidly for a week, I think that I almost needed a full month to make it part of my daily routine. I also think that I would have had a much better experience with it had I known that there was a secondary app that would allow me to customize my interactions with the device and dictate which alerts I saw; it would be even better if that app (called Nabu Home) would actually work with the latest iteration of the Nabu app. In a nutshell, I loved seeing the steps I took and the calories I exerted during a day, but would I say that the Nabu is a life changer? Not really.