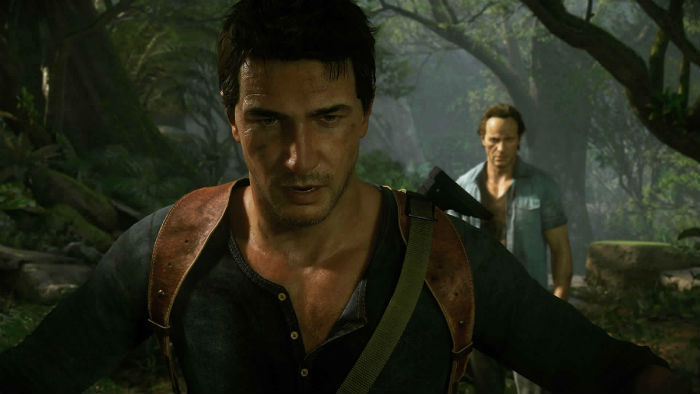 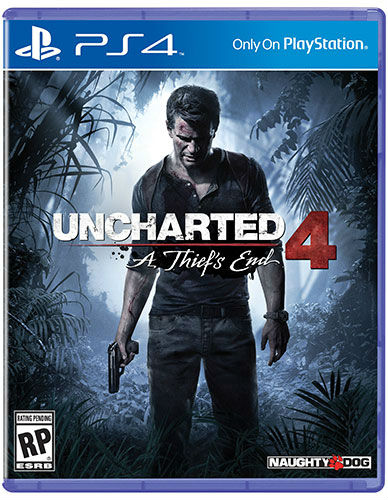 Some of my all-time favourite gaming memories are from Uncharted—Sony and Naughty Dog’s grand, globetrotting action-adventure series starring the world-renowned treasure hunter Nathan Drake. After three phenomenal installments on PS3, the long-awaited arrival of Drake’s first, and only, tale on PS4 is here with Uncharted 4: A Thief’s End.

This ambitious final chapter of Drake’s illustrious fortune-seeking saga ups the ante with the most breathtaking environments, slickest choreographed action, deepest story, smoothest controls, and greatest multiplayer experience in franchise history. More than that, for the first time ever, the layers of Drake’s past are peeled back to give us a wider, holistic perspective on this beloved and legendary character. Uncharted 4 soars above and beyond expectations, delivering an unrivaled, unmatched gaming tour de force that sets a new benchmark for its respective genre and is unquestionably the best PS4 game to date. 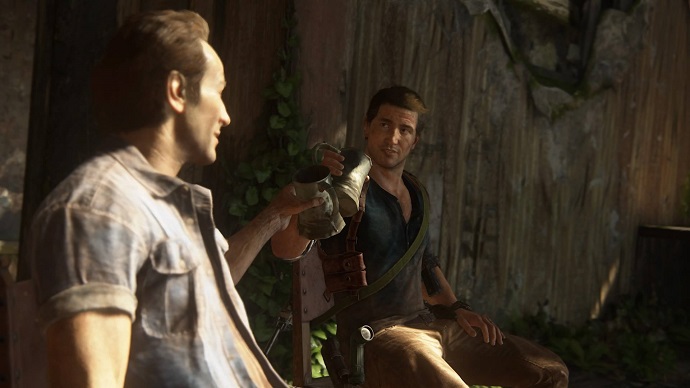 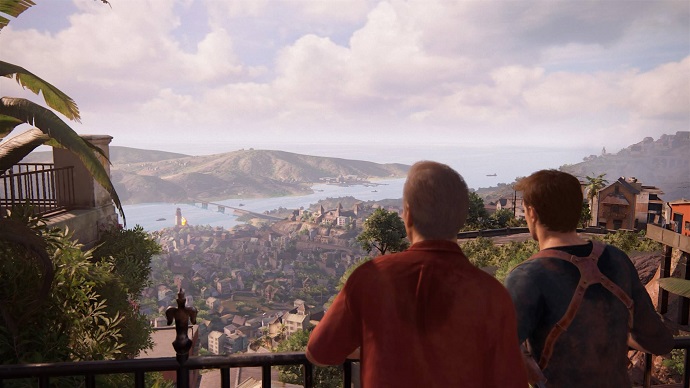 That all changes however when Nathan’s presumed deceased brother, Sam Drake, suddenly reappears alive and well after fifteen long years. Once the shock of his brother’s presence wears off the reality of Sam’s situation sets in: he must find the long lost treasure of infamous pirate Henry Avery in short order or suffer dire consequences at the hands of a powerful Panamanian drug lord. Nate, spurred by his unshakeable brotherly bond and strong sense of adventure, agrees to set out with Sam on another precarious mission, despite his vow to Elena that’s he’s turned that page. 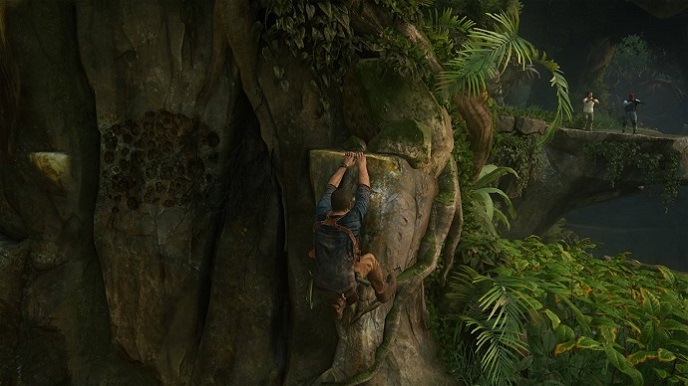 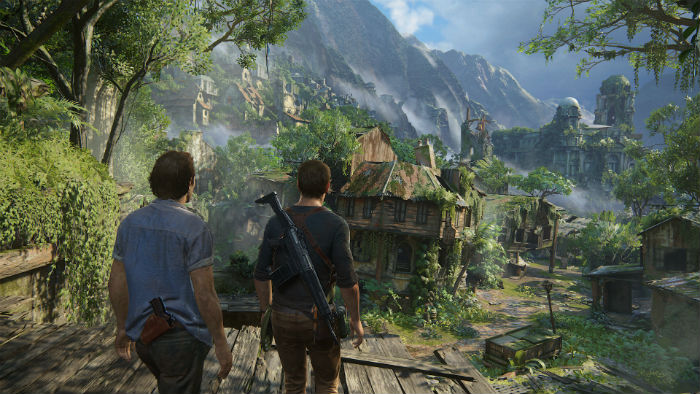 Dispel the mystique behind the man

After the original writer and creative director, Amy Hennig, left Naughty Dog in 2014, the directorial team behind Sony’s The Last of Us took command of the project and re-wrote the majority of the script. While we’ll likely never know what was kept and what was replaced, the influences of the new team on Drake’s story seem readily apparent. Uncharted 4 is a much more introspective, emotional journey exploring Drake’s troubled past as a young orphan who stumbles into a life of treasure-hunting as the behest of his brother Sam. The story makes a habit of jumping between different time periods to provide layers of perspective on the complex character of Drake and his devoted relationship with his older brother.

All this storytelling is brought to life with the best motion capture and voice acting performances the series has seen yet. Reprising their roles are Nolan North (Nathan Drake), Richard McGonagle (Victor Sullivan), and Emily Rose (Elena Fisher), who display heart-warming enthusiasm, while newcomers Troy Baker (Samuel Drake), Warren Kole (Rafe Adler), and Laura Bailey (Nadine Ross), offer intriguing characterizations that add a fresh new dynamism to the story. This high level of narrative polish applies not only to the cinematic-style cutscenes, but also the superb in-game banter between characters and plethora of witty optional conversations. 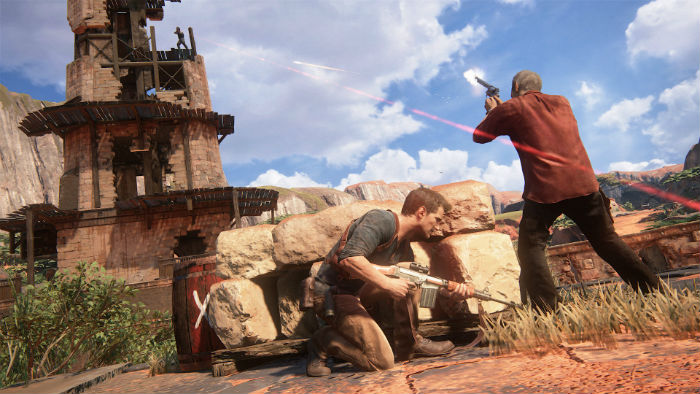 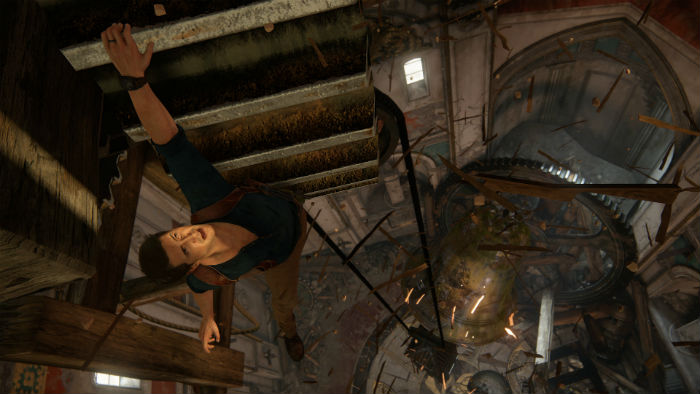 Gameplay that swings to new heights

Everything you love about Uncharted‘s gameplay is back and better than ever in this latest entry. Drake’s rock climbing skills are polished to perfection, letting you effortlessly climb impossibly steep terrain with simple movements of the left analog stick. As you clamber up dilapidated ruins and leap from plateau to plateau, expect to see the usual hazards the series is well-known for, such as crumbling ledges, crashing pillars, and large falling debris. While the dangers are familiar, these moments are even more intense given the vivid realism and super smooth 30fps gameplay on PS4.

Newly introduced in this game is the grappling hook, which enables you to latch onto tree branches and other jutting objects then swing across wide gaps with dazzling flair. There’s also a new sliding mechanic that turns rocky slopes into the equivalent of fast-paced waterslides that require precise reactions. Uncharted 4‘s gameplay is at its best is when multiple mechanics are strung together is rapid succession, such as the many times you’ll need to take a leap of faith at the base of a slide to a faraway ledge, or even more exhilarating, when there is no safe ledge in sight and your only option is to desperately deploy your grappling hook in hopes of latching onto anything before plunging to your doom. 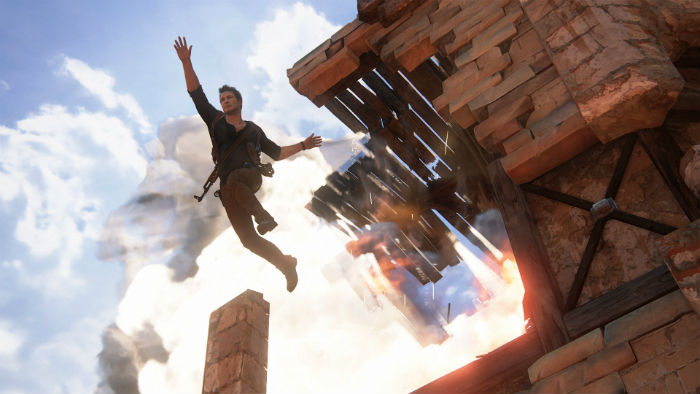 For all its exceptional gameplay moments, Uncharted 4 has a curious lack of memorable set pieces like we’ve seen in previous games. Aside from a chaotic car chase in Madagascar, a vertigo-inducing bell tower climb, and a flash near-death scare involving a vehicle tumbling over a cliff, the Hollywood-style action sequences simply aren’t here. Instead, to spice up the action we’re given alternatives like the ability to drive a 4X4 through an enormous (and gorgeous) open-world, and major new improvements to the ways you can approach hostile situations.

One such improvement is the new ability to hide in tall grass and stealthily creep up to enemies for a knockout take down. This mechanic works wondrously for the most part, however the down side is you can’t drag and hide bodies like you can in say Metal Gear or Hitman. This becomes very frustrating when you consider that your opponents now have various degrees of alertness, starting with them unaware of danger, to them spotting suspicious activity, to finally engaging in all-out combat. Fortunately, so long as the enemies you take down are fully hidden in the tall grass, other patrolling goons with often not take notice.

On the topic of combat, it’s worth noting that your companions—be is Sam, Elena, or Sully—are a serious help and smartly follow your lead. Should you take a quiet, stealthy approach to enemy-laden areas, your teammate will follow suit and move just as silently. Conversely, if you run in with guns a-blazing, your partner will empty clips right alongside you. Funny enough, if your partner is blocking your way when climbing, they’ll actually stand idle while you shimmy over top them, which I thought was a humourous touch.

A magnificent sight to behold

Graphically, Uncharted 4 easily rivals the best games on the market today. If you found yourself gazing into the distance to soak in the sights in the previous games, just wait until you see how photorealistic the magnificent game environments are this time around. From an opulent Italian auction hall, to the stunning volcanic backdrop of Madagascar, to the eerie catacombs under a Scottish tomb, every location is filled with extravagant eye candy that’s worth taking some time to admire. Scattered among the ruins and rubble are over 100 hidden treasures to find, so while you’re feasting your eyes on the game’s finer details, be sure to explore every nook and cranny for these valuable relics. 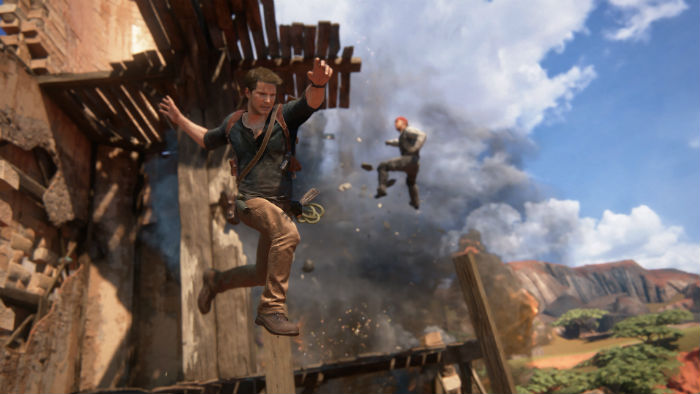 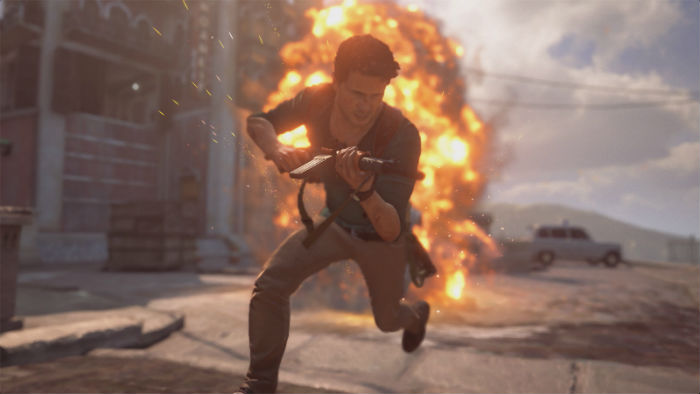 Multiplayer will keep you playing

Once you’ve completed Uncharted 4 breathtaking 15-hour campaign, the online Multiplayer will keep you coming back for more. There are 8 initial maps (with more free DLC to come), 4 core modes—Ranked, Command, Team Deathmatch, and Plunder—plus a warm up playlist for newcomers. In Ranked matches you play to earn points and enter Qualifiers to rise in rank from Bronze level 3 up to Diamond level 1. This is where you’ll find the most competitive players, so if you love a good challenge, Ranked is a great place to start. 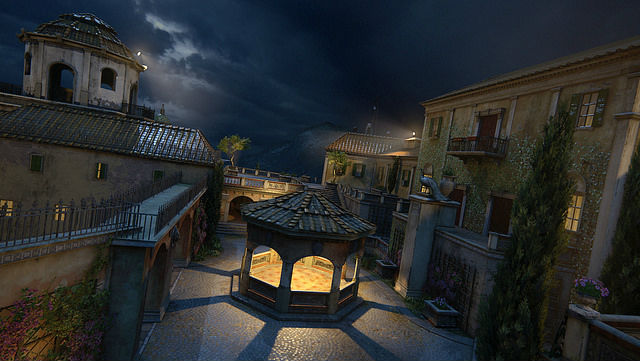 I prefer the two objective-type multiplayer modes, Command and Plunder, as these demand airtight co-operative strategies and lead to some pretty epic showdown. In Command, the goal is to capture command sites to steadily add points to your side, and each team is also assigned a Captain that can be killed for a large point boost. Maps have multiple command sites, requiring your team to decide when to infiltrate a new site, and when to guard ones already captured. I played lots of thrilling back-and-forth seesaw matches where one team would shoot ahead, then lose key command sites (or their Captain) and fall behind, only to later surge back and reclaim the lead.

The other fun objective multiplayer mode is Plunder, a game type where an idol is placed in the centre of the map and both teams attempt to deliver it to their side’s treasure chest. While holding the idol your movement speed is severely diminished, leaving you extremely vulnerable to enemy attack, but you are able to climb while holding the treasure, or give it a toss in emergencies. Like Command, your team needs to work cohesively to achieve victory, in this case by coordinating attacks against enemy idol holders, and once in possession, protecting your idol holder as they fight for every inch.

Controls in multiplayer is the same as the main campaign, however, new additions including Mystical summons and sidekicks create fresh dynamics. With the former, you can summon the spirits of ancient entities to aid you in battle, like calling up the Wrath of El Dorado to seek out and damage your opponents. Sidekicks, on the other hand, back you up in battle and vary from long-range snipers, to tough brutes, to savior medics, and silent hunters. Mystics and Sidekicks are purchased with in-game cash that you acquire during the match, so their use must be earned, and it takes strategy to know what assistance to call upon in any given situation. Some people may prefer “pure” competitive gameplay and not like these new elements, but as someone who plays online more casually, I had a lot of fun signalling in game-changing help. 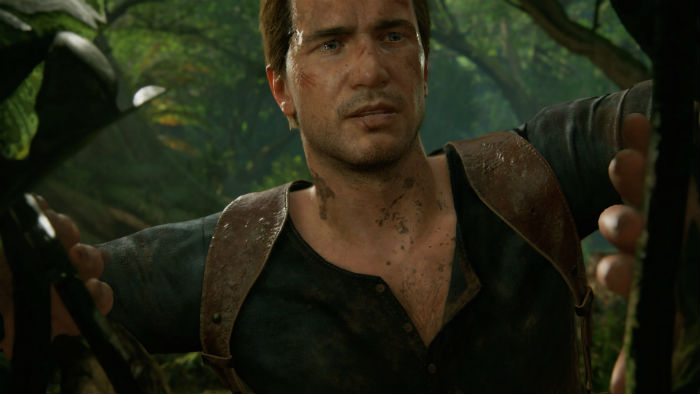 Without question, Uncharted 4: A Thief’s End is the greatest game to release on the PlayStation 4 yet. The game has it all: breathtaking graphics, edge-of-your-seat cinematics, top-notch motion capturing and voice acting, frenetic gunplay combat, finessed climbing mechanics, a moving story, and the best multiplayer in franchise history. Uncharted games have a history of setting new benchmarks in the action-adventure genre, and once again Sony and Naughty Dog have raised the bar even higher. This game may have been a long time coming, but in the end, it was well worth the wait.

Get Uncharted 4: A Thief’s End for PlayStation 4

Get Uncharted 4: A Thief’s End Special Edition for PlayStation 4