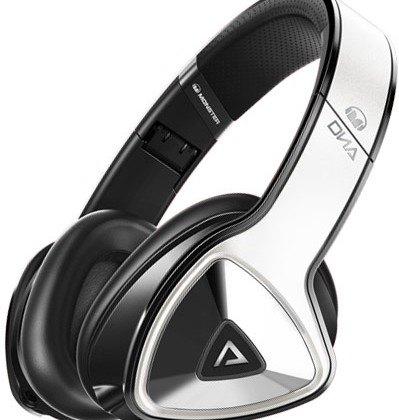 Over the last few years, we’ve seen Monster diversify themselves from just a cable and power strip company.  One of the things they’ve been doing as late is putting out quality headphones, and that looks to continue with the Monster DNA line. This line of mid-end noise-isolating headphones look to capture the very essence of your musical experience and turn into it something special using what “Head Monster” Noel Lee touts as “Pure Monster Sound.” Headphones come in many different colors, and you can even get skin packs from Monster themselves to jazz things up later on down the road.

What is “Pure Monster Sound?”
One of the more interesting aspects of these headphones are the advertising promise of “Pure Monster Sound?” What is that exactly?  Monster says that they’ve retooled much of the audio output to give you the best experience possible with the most realistic live music experiences, or thumping bass and extreme clarity. I’ll address how it sounds later in the review.

These headphones are very slick looking.  The housing is extremely well constructed and sturdy, as you can expect with any Monster build. Metal hinges adorn the bend points rather than plastic or a ball-and-socket style device. Most interesting to me is the triangular design of the ear cup exterior. It’s definitely an attempt from Monster to make their gear stand out from the rest who employ mostly simpler circular designs to just hide the ear cup. This transitions over into the cup design itself too, which is triangular on the inside. It seemed a bit odd coming out of the box, but I’m game to try anything.

The “Pure Monster Sound” aspect isn’t just a buzzword.  Live performances do sound great, as does listening to older versions of recordings that haven’t since been remastered. Many of the CDs, for example, were released before future remastered editions came out (like Nine Inch Nails’ Pretty Hate Machine, for example.)  I ran these headphones through the paces with albums like that and some of the other classic rock original records I’ve got like (like Fleetwood Mac’s Rumours and a couple Deep Purple and Black Sabbath albums)  and they played pretty well. While other headphones I’ve reviewed did a better job of trying to eliminate the infamous tape hiss that exists on these records, these did a great job of amplifying and cleaning up the otherwise-messy sound. 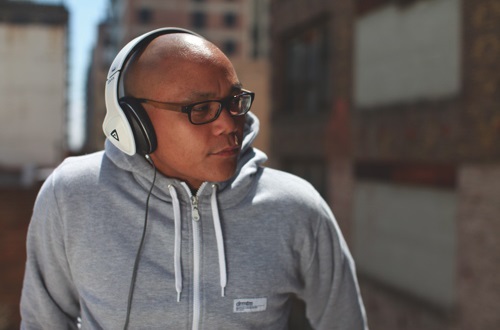 Interestingly, the feature I found most interesting was the Monster Music Share option, which isn’t necessarily a selling feature for the headphones, but is something you don’t get with any other similar models.. This allows you to share your music with up to 5 others without any special equipment (like those splitter devices one kid in your class always seemed to have.)  This way, only one person has to carry the player, and everybody can enjoy with their own headphones. Or, how many times have you been listening to a song, only to say to somebody with you to listen in to a song, and have trouble sharing because you have such a rigid pair of headphones and have to hold it between you?  Monster solves the problem here – Just plug your friend’s earphones or earbuds into the adjacent jack and have at it. The set has a pair of input jacks on either ear to make sharing easier, as well as giving you the choice of which way you side you want the cord on. 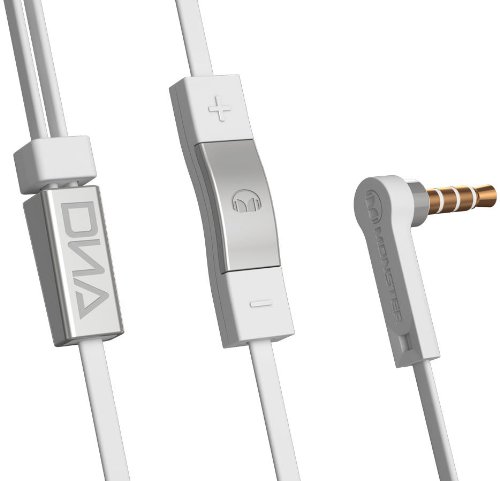 There are two cords included. There’s one that looks like your standard home audio coil cable with the inclusion of a 3.5mm to ¼ inch adaptor in case you want to plug it into a standard home stereo setup. The other is the ControlTalk adapter cable for use with Apple products. You can use it to plug in as a mini remote for your music and phone calls. It’s got a little 3 button remote up near where you plug into your DNA Headphones that can be used to answer calls, pause and play music and adjust the volume.  You should be aware, however, that this function ONLY works on Apple devices. You can use this as a standard cable, however, the remote functions don’t work on the volume like you would get, say, out of a pair of PC Headphones.

One final thing to keep in mind is that these headphones are sound-isolating as opposed to noise-canceling. These might sound like buzzword terms, but they both have very different purposes.  Here’s basically a high level Coles Notes of what each do, and why the Monster DNA Headphones being Sound Isolating may be to your benefit.

In essence, Noise cancellation emits a sound frequency which cancels out most low range ambient sound. This is why it works so well with low hums and lower pitched noises, like engines or fans. Higher pitched noises, like voices, crying or screaming may be naturally muffled, however, they aren’t “canceled out” perse.  Sound Isolation attempts to block those outside sounds out while attempting to keep all of the music “inside” the ear cup. Your success level varies upon the type of headphone (over ear vs. in ear vs. on ear) you’ve chosen, but that’s how it works on a high level. With that explanation, I’d probably waver toward more sound isolation in the future, but noise cancellation has been around for so long that it’s the term we most often associate with trying to drown out the outside noise.

Having reviewed a few pairs of headphones in my day, I’ve experienced the benefits of good noise cancellation, good sound/noise isolation, and even the benefits of having neither. My hearing was probably wrecked a bit from the years of loud concerts and music I enjoyed in my late teens and early 20s, but I have to admit that of the little difference I can tell, noise isolation does it better for me.

As for these headphones, I’d say it stood up to Monster’s claims of musical clarity and pumping bass, but there were a couple things I didn’t care for either. My ears must be abnormally shaped to Monster, since I had to tuck my earlobes into the cups for them to fit completely. After wearing them for a couple hours, I admit my ears were a bit cramped and sore. They didn’t get overheated or hot like other over ear cans have done for me in the past, but if you’re a descendant of Dumbo like I apparently am, you might want to stick to more traditional over ear designs or at least something with larger or rounded ear cups. For the majority of you, however, these will do you great. Everything from classic rock, to rap, to heavy metal (in studio and live) sound clean, and sound great.

If the price of the Pro Headphones are a bit bunch, the DNA sound experience is available through the On Ear DNA Headphones as well, which are nearly half the price. They come with the same gear, and the same sound isolation technology. You just need to be aware of the fact that they’re an On Ear property, and if you prefer your ears to be enclosed listening to music like I do, you’re best to stick with the “Over the Ear” products.

Monster DNA Pro Over Ear Headphones are now available at Best Buy and online at BestBuy.ca