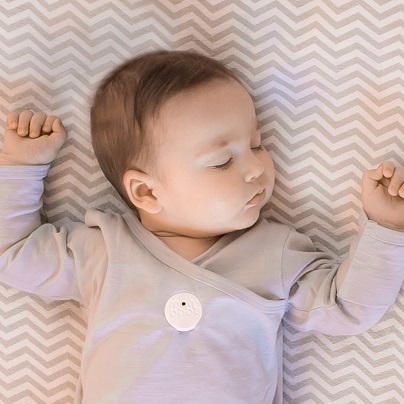 Sometimes I have a tendency to put the cart before the horse, to borrow an old adage. I was approached with the idea of reviewing The Monbaby Smart Button Baby Monitor and thinking that it was a traditional baby monitor, I jumped on the opportunity. After all, my daughter isn’t yet 2 and we still use our baby monitor nightly.

Then, I had a look at what the Monbaby was. Oops.

Pictured there to your right, Monbaby is a monitor that attaches to your baby’s clothing and acts like a guardian beacon for you. It will tell you the quality of your baby’s sleep as well as wake times in the middle of the night, when it rolls over and when it’s breathing is obstructed. The thing advantage Monbaby has over its competition is that it is an attachment to any piece of clothing. Some devices require you to buy proprietary clothing to go along with it while others clip onto diapers. There are other devices out there that monitor sleep movement (or lack thereof) but do not measure sleep quality, notify of wakeups or notify you if a baby has rolled over specifically onto its stomach.

My daughter is a little bit past the age where she needs this sort of tracking. In fact, she moves so much in her sleep and around her crib that a Fitbit is probably a better idea at this point. Instead, Monbaby was tested on 3 month old baby Madeleine, the daughter of 2 good friends of mine. Since she isn’t mobile in her sleep yet, a child her age is in the perfect age range for this.

As a frame of reference for the data in this review, Madeleine currently sleeps through the night without waking and is not in the middle of any “leaps” or growth spurts that is waking her up throughout the night.

Setting up and getting started

Monbaby is pretty easy to set up. Just plug a battery in (it comes with two) and follow the simple power and synchronization steps. While doing this, make sure you’ve downloaded the Monbaby app which is available for both Android and iOS. It’s a Bluetooth device so you’ll have to ensure it’s enabled on your phone or tablet.

From there, the device attaches and snaps really easily to your baby’s clothing. Since the device is designed for a back-sleeping baby, the optimal place to clip it would be to the baby’s chest. Once you have it connected to the app (a light on the Monbaby will flash,) it’s time for the fun to begin. Now all you’ll have to do is wait for your baby to fall asleep. This is an easier said than done for some of us.

In the meantime, get accustomed to the app, which in itself is very comprehensive. I would say that it safely covers off a lot of the worries parents have, including movement, activity and even the remaining battery life so you know in advance when you’ve got to replace it. The device is specifically designed to push you notifications timed to the severity of what’s happened. For example, it’s known as their little lungs develop, babies can stop breathing for a few seconds at a time because they haven’t quite learned how to do it all yet. This is perfectly normal and for this reason, Monbaby doesn’t push you a notification that your baby’s stopped breathing for 15 seconds. However, a baby rolling onto its stomach could be fatal much sooner. In this case, the baby’s airway is completely obstructed and because they lack the ability to correct the situation (since they may not be able to roll back aside and clear said airway,) you get a notification only a second after it happens. Here’s an example of the alert you’d receive when your baby has rolled over onto their stomach. 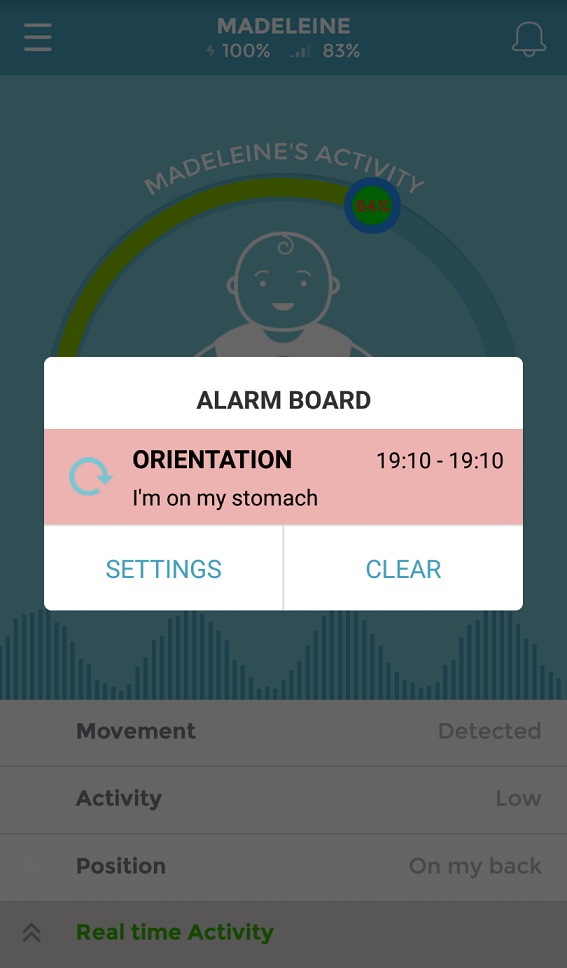 The concept of Monbaby is great in theory, but right now, it leaves a lot to be desired. The trouble with Monbaby is that low powered bluetooth emission. Mon Technologies claims that the monitor has a signal range of around 60 feet. That’s great if you have a nice unobstructed space. My friends’ main floor is open concept which means that they can leave Madeleine asleep in her playpen in the living room and make dinner or eat in their kitchen without disrupting the signal. The trouble is, I still find that Bluetooth signals can be easily obstructed otherwise. Walls, doors, you name it. One can assume that a low powered emission has more challenges than a regular one.

For example, if you co-sleep or your baby sleeps in a cot or bassinet in your room, no problem. Your stats will be 100% accurate. This is the time that Monbaby is its strongest. First time parents who are unaware of the noises, snorts and breathing interruptions a baby does while sleeping will draw a lot of comfort from a device like this. I had no idea what I was and wasn’t listening in for when my daughter was born and I remember staying up almost the entire first few nights listening in horror until my wife convinced me everything was normal. Monbaby would have been of great help to me (mostly) those first couple months.

However, if your baby already sleeps in its own room, or you are nap/sleep training it to do that, you’re going to have some problems. As a reminder of reference, 2 month old Madeleine already sleeps a lengthy stretch in the middle of the night (8-9 hours. We put Madeleine to bed and went downstairs. I noticed an odd blip with the data so I left it with my friend overnight. This was what the readout looked like in the morning. Before you see the shot, I can confirm that she did in fact sleep the night without waking. 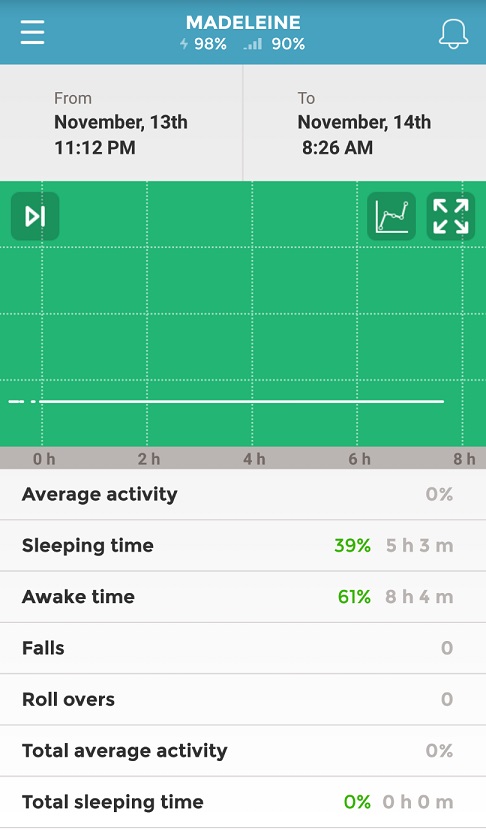 That’s not good. In comparison, here’s a nap where the phone was left next to her to capture data. As you can see, it’s much more accurate because the signal was strong and unbroken. In addition, there are some additional features on the app that do work perfectly. So if you want to create wake time plot points and chart things out while you compile your data, you’re good to do so by all means. Here’s how things look on the activity chart when it’s properly collecting data. Note the realtime visual of how consistent and steady her sleep is at this point. The phone was moved closer in range at that 45 second mark.

My signal issues aside, Monbaby has a definite purpose in a baby’s early life. This will definitely make a great shower or congratulatory gift for the parents of a newborn who will be sleeping the baby in the bedroom for the first while. I’d say it’ll definitely help them sleep at night much easier knowing that there’s a constant set of proverbial “eyes” making sure baby is safe at all times while they’re asleep.

That said, Monbaby should probably be discontinued when you find that your child’s sleep will be disrupted by it. Since most babies will only learn to roll one way in their sleep, the chest attachment means you could probably get around 6-8 months usage out of it. Once your child can roll onto their stomach, it will get in the way and likely wake them up the moment they roll onto it. It will also trouble you a bit since you get an alert saying the baby has rolled onto their stomach when that may be their preference by then.

Realistically, by 8 months, the risk of SIDS will have significantly decreased anyway. Chances of overheating are less likely since your baby’s sweat glands will be active by 3 months and by 6 months, they should be able to grab objects independently enough that if something does come amiss in the crib, they can move it out of the way (though it isn’t recommended they sleep with stuffies or blankets for a while after that.) By then, you should be alright to safely pass Monbaby on to your next friend or family member with a newborn or tuck it away for the next child.